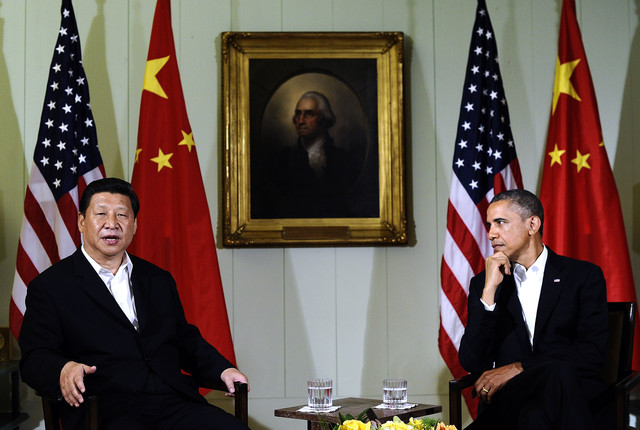 U.S. Looking For Trouble In China

Above: U.S. President Barack Obama & Chinese President Xi Jinping taking questions following their bilateral meeting in Rancho Mirage, California, on June 7, 2013. Photographer: Jewel Samad/AFP via Getty Images.
The US likes to pick fights.  That is what bullies do.  In early 2001 George W. Bush sent a lumbering propeller driven US Air Force spy plane bumping up along China’s coastline.  China scrambled two jets and brought the US plane down onto Hainan Island.  The Chinese held the crew for a while and then sent them home.  China took the spy plane apart and kept the interesting technology.  Eventually they packed the plane parts into crates and shipped it back to the US.  Sometime later Lockheed Martin (who built the US spy plane) built a military reconnaissance system for China on Hainan Island so they could keep a better eye on their coastline.  Talk about making money off both sides of the street.

Bush sent the easy to be intercepted spy plane along the China coast for several reasons.  He wanted to test their ability to intercept such flights but he also wanted to create an international incident that would help him further demonize China back home.  It was all about showing how “aggressive” China has become.

Now Obama is getting into the act as well.  The Washington Post reports:

The Pentagon announced Tuesday that it had defied Beijing by flying two warplanes over the East China Sea on a training exercise, ignoring a recent edict from China that it be informed in advance of any such flights in the region.

U.S. military officials said they deployed two unarmed B-52 bombers late Monday over a small island chain that China and Japan both claim as their territory. Lt. Col. Tom Crosson, a military spokesman, described the flights as “uneventful” and said they were part of a previously scheduled training mission. He said there was “no contact, no reaction from China.”

Imagine just for a moment if China, or any other country, began moving 60% of their military forces within shooting range of the US Atlantic and Pacific coasts.  Imagine if that same country was establishing military bases in Mexico or Canada.  The US government would be freaking out.  Then further imagine that same country flying spy plane and bombers up along our coast.  The Pentagon would be screaming “provocation” like a junkyard dog.  But when the US does it we are just defending “freedom of movement in international airspace or waterways”.  No need to worry at all.

The B-52 bombers took off from Andersen AFB in Guam. That island (called the ‘tip of the spear’ by the Pentagon) is under assault as the US pushes to take more and more land for military operations.

I understand that creating these incidents builds fear at home and fear is what keeps military spending high and big profits rolling into the coffers of the military industrial complex.  But these kind of dangerous and destabilizing tactics by an out-of-control US military machine is what starts wars that bleed the people back home literally and figuratively.

Where are the voices of sanity in the Congress slapping Obama’s hand and saying NO?  Those so-called progressive elected officials appear to be stuffed so deeply into the pockets of the weapons industry their voices are muted and/or silenced.  It then is left to us – the great unwashed back in the hustings.  It’s our job to tell the boys in Washington to stop playing their deadly games of Russian roulette.  Put the loaded gun down and go outside and play in the sand box.  It’s time for some adult supervision of this crazy bunch running the war machine.

More on the standoff in the Pacific:

Is Shinzo Abe’s ‘new nationalism’ a throwback to Japanese imperialism?, The Guardian, November 28, 2013