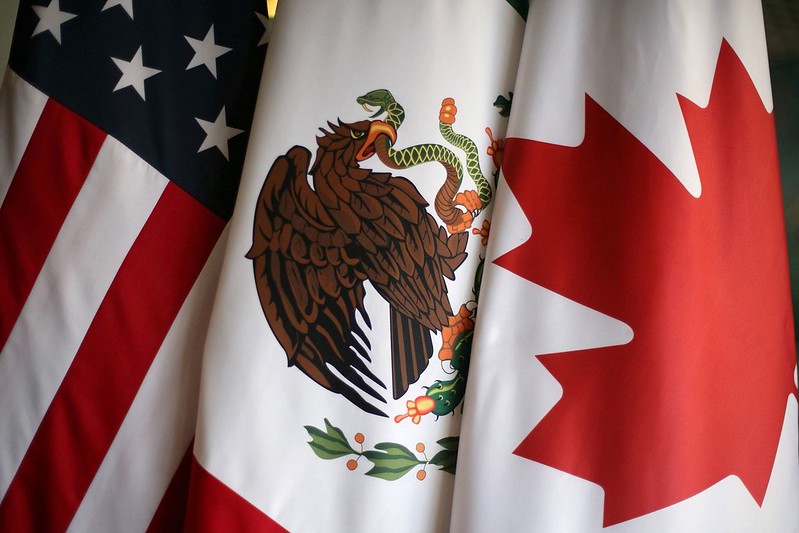 The revised U.S.—Mexico—Canada Agreement (USMCA), announced today by House Speaker Nancy Pelosi and endorsed by the AFL-CIO, represents a significant improvement on the draft agreement first released in 2017. Negotiators for labor and House Democrats strengthened the provisions on labor rights, environmental standards, and the enforcement of these rules, and also removed costly and egregious new protections for corporations, including giveaways by the Trump administration to pharmaceutical companies.

But the changes embodied in the USMCA still constitute Band-Aids on a fundamentally flawed agreement and process. Powerful multinational corporations have used and controlled the negotiation of trade and investment deals to facilitate offshoring and the deregulation of the U.S. and global economy, as noted by the Machinists Union, which has announced its opposition to the USMCA. The original North American Free Trade Agreement (NAFTA) resulted in the loss of at least 680,000 U.S. jobs due to growing trade deficits with Mexico alone. It also caused downward pressure on the wages of nearly 100 million U.S. workers and the devastation of manufacturing communities across the United States, especially in the industrial Midwest and battleground states—with far-reaching social and electoral consequences.

The USMCA will result, at best, in roughly 51,000 new manufacturing, mining, and farming jobs over the next six years, according to the U.S. International Trade Commission, and it will add a few tenths of one percent to gross domestic product (GDP) growth over this period. On the other hand, the International Monetary Fund (IMF) predicts that the United States, and the auto sector in particular, will be a net loser from this agreement. Thus, these projections are not at all robust. The benefits are tiny, and it’s highly uncertain whether the deal will be a net winner or loser, in the end.

As a result, the USMCA will in no way offset or reverse the massive devastation caused by the original NAFTA agreement. Nor is the deal a “model for future trade agreements.” The United States should pursue a freeze on all trade negotiations until strategies and policies are put in place to raise living standards, especially for working Americans, as proposed by former EPI President Jeff Faux.

Despite these concerns, the USMCA may yield benefits for workers in a few industries, such as glass and steel. And it may result in significant improvements in labor rights for Mexican workers, which could help them in the long-run. But those changes will have virtually no measurable impacts on wages or incomes for U.S. workers, as shown (unintentionally) by the United States International Trade Commission’s USMCA report. Supporting the USMCA is better than having President Trump withdraw from NAFTA, which would pitch North America into economic turmoil, especially for Mexico and Canada. At the end of the day, the USMCA is the best of a set of bad choices. And only concessions obtained through tough negotiations by labor, environment, and consumer activists made it any better than the status quo. As a result, it is better than the alternatives.