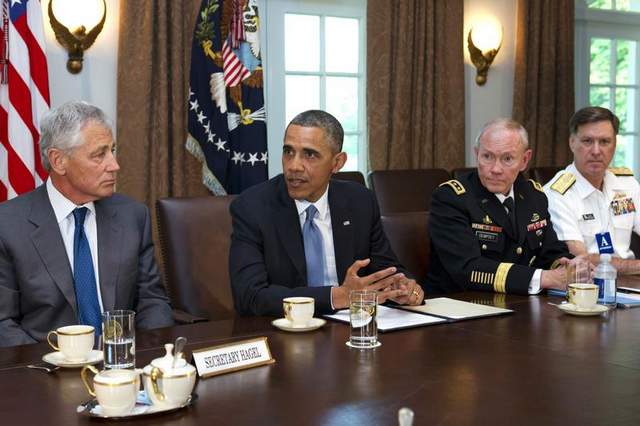 U.S. Military Has Deep Doubts About Impact, Wisdom Of A U.S. Strike On Syria

The Obama administration’s plan to launch a military strike against Syria is being received with serious reservations by many in the U.S. military, which is coping with the scars of two lengthy wars and a rapidly contracting budget, according to current and former officers.

Having assumed for months that the United States was unlikely to intervene militarily in Syria, the Defense Department has been thrust onto a war footing that has made many in the armed services uneasy, according to interviews with more than a dozen military officers ranging from captains to a four-star general.

Former and current officers, many with the painful lessons of Iraq and Afghanistan on their minds, said the main reservations concern the potential unintended consequences of launching cruise missiles against Syria.

Some questioned the use of military force as a punitive measure and suggested that the White House lacks a coherent strategy. If the administration is ambivalent about the wisdom of defeating or crippling the Syrian leader, possibly setting the stage for Damascus to fall to fundamentalist rebels, they said, the military objective of strikes on Assad’s military targets is at best ambiguous.

“There’s a broad naivete in the political class about America’s obligations in foreign policy issues, and scary simplicity about the effects that employing American military power can achieve,” said retired Lt. Gen. Gregory S. Newbold, who served as director of operations for the Joint Chiefs of Staff during the run-up to the Iraq war, noting that many of his contemporaries are alarmed by the plan.

Marine Lt. Col. Gordon Miller, a fellow at the Center for a New American Security, warned this week of “potentially devastating consequences, including a fresh round of chemical weapons attacks and a military response by Israel.

“If President Asadwere to absorb the strikes and use chemical weapons again, this would be a significant blow to the United States’ credibility and it would be compelled to escalate the assault on Syria to achieve the original objectives,” Miller wrote in a commentary for the think tank.

A National Security Council spokeswoman said Thursday she would not discuss “internal deliberations.” White House officials reiterated Thursday that the administration is not contemplating a protracted military engagement.

Still, many in the military are skeptical. Getting drawn into the Syrian war, they fear, could distract the Pentagon in the midst of a vexing mission: its exit from Afghanistan, where U.S. troops are still being killed regularly. A young Army officer who is wrapping up a year-long tour there said soldiers were surprised to learn about the looming strike, calling the prospect “very dangerous.”

“I can’t believe the president is even considering it,” said the officer, who like most officers interviewed for this story agreed to speak only on the condition of anonymity because military personnel are reluctant to criticize policymakers while military campaigns are being planned. “We have been fighting the last 10 years a counterinsurgency war. Syria has modern weaponry. We would have to retrain for a conventional war.”

Gen. Martin Dempsey, chairman of the Joint Chiefs of Staff, has warned in great detail about the risks and pitfalls of U.S. military intervention in Syria.

“As we weigh our options, we should be able to conclude with some confidence that use of force will move us toward the intended outcome,” Dempsey wrote last month in a letter to the Senate Armed Services Committee. “Once we take action, we should be prepared for what comes next. Deeper involvement is hard to avoid.”

Dempsey has not spoken publicly about the administration’s planned strike on Syria, and it is unclear to what extent his position shifted after last week’s alleged chemical weapons attack. Dempsey said this monthin an interview with ABC News that the lessons of Iraq weigh heavily on his calculations regarding Syria.

“It has branded in me the idea that the use of military power must be part of an overall strategic solution that includes international partners and a whole of government,” he said in the Aug. 4 interview. “The application of force rarely produces and, in fact, maybe never produces the outcome we seek.”

The recently retired head of the U.S. Central Command, Gen. James Mattis, said last month at a security conference that the United States has “no moral obligation to do the impossible” in Syria. “If Americans take ownership of this, this is going to be a full-throated, very, very serious war,” said Mattis, who as Centcom chief oversaw planning for a range of U.S. military responses in Syria.

The potential consequences of a U.S. strike include a retaliatory attack by the Lebanese militant group Hezbollah — which supports Assad — on Israel, as well as cyberattacks on U.S. targets and infrastructure, U.S. military officials said.

“What is the political end state we’re trying to achieve?” said a retired senior officer involved in Middle East operational planning who said his concerns are widely shared by active-duty military leaders. “I don’t know what it is. We say it’s not regime change. If it’s punishment, there are other ways to punish.” The former senior officer said that those who are expressing alarm at the risks inherent in the plan “are not being heard other than in a pro-forma manner.”

President Obama said in a PBS interview on Wednesday that he is not contemplating a lengthy engagement, but instead “limited, tailored approaches.”

A retired Central Command officer said the administration’s plan would “gravely disappoint our allies and accomplish little other than to be seen as doing something.”

“It will be seen as a half measure by our allies in the Middle East,” the officer said. “Iran and Syria will portray it as proof that the U.S. is unwilling to defend its interests in the region.”

Still, some within the military, while apprehensive, support striking Syria. W. Andrew Terrill, a Middle East expert at the U.S. Army War College, said the limited history of the use of chemical weapons in the region suggests that a muted response from the West can be dangerous.

“There is a feeling as you look back that if you don’t stand up to chemical weapons, they’re going to take it as a green light and use them on a recurring basis,” he said.

An Army lieutenant colonel said the White House has only bad options but should resist the urge to abort the plan now.

“When a president draws a red line, for better or worse, it’s policy,” he said, referring to Obama’s declaration last year about Syria’s potential use of chemical weapons. “It cannot appear to be scared or tepid. Remember, with respect to policy choices concerning Syria, we are discussing degrees of bad and worse.”