Producing more hazardous waste than the five largest U.S. chemical companies combined, the U.S. Department of Defense has left its toxic legacy throughout the world in the form of depleted uranium, oil, jet fuel, pesticides, defoliants like Agent Orange and lead, among other pollutants.

MINNEAPOLIS– Last week, mainstream media outlets gave minimal attention to the news that the U.S. Naval station in Virginia Beach had spilled an estimated 94,000 gallons of jet fuel into a nearby waterway, less than a mile from the Atlantic Ocean. While the incident was by no means as catastrophic as some other pipeline spills, it underscores an important yet little-known fact – that the U.S. Department of Defense is both the nation’s and the world’s, largest polluter.

Producing more hazardous waste than the five largest U.S. chemical companies combined, the U.S. Department of Defense has left its toxic legacy throughout the world in the form of depleted uranium, oil, jet fuel, pesticides, defoliants like Agent Orange and lead, among others.

In 2014, the former head of the Pentagon’s environmental program told Newsweek that her office has to contend with 39,000 contaminated areas spread across 19 million acres just in the U.S. alone.

U.S. military bases, both domestic and foreign, consistently rank among some of the most polluted places in the world, as perchlorate and other components of jet and rocket fuel contaminate sources of drinking water, aquifers, and soil. Hundreds of military bases can be found on the Environmental Protection Agency’s list of Superfund sites, which qualify for clean-up grants from the government.

Almost 900 of the nearly 1,200 Superfund sites in the U.S. are abandoned military facilities or sites that otherwise support military needs, not counting the military bases themselves.

“Almost every military site in this country is seriously contaminated,” John D. Dingell, a retired Michigan congressman and war veteran, told Newsweek in 2014. Camp Lejeune in Jacksonville, North Carolina is one such base. Lejeune’s contamination became widespread and even deadly after its groundwater was polluted with a sizable amount of carcinogens from 1953 to 1987. 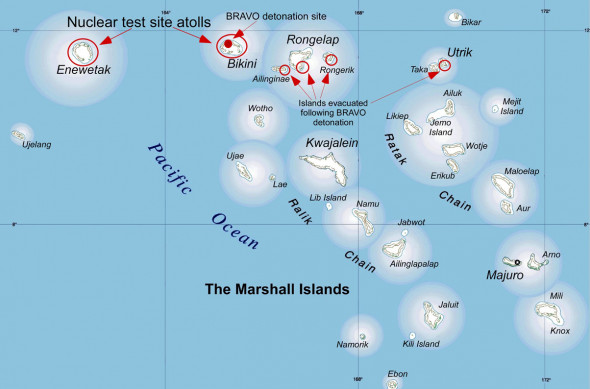 Between 1946 and 1958, the US tested 66 nuclear weapons near Bikini atoll. Populations living nearby in the Marshall Islands were exposed to measurable levels of radioactive fallout from these tests. (Map: National Cancer Institute)

However, it was not until this February that the government allowed those exposed to chemicals at Lejeune to make official compensation claims. Numerous bases abroad have also contaminated local drinking water supplies, most famouslythe Kadena Air Force Base in Okinawa.

In addition, the U.S., which has conducted more nuclear weapons tests than all other nations combined, is also responsible for the massive amount of radiation that continues to contaminate many islands in the Pacific Ocean. The Marshall Islands, where the U.S. dropped more than sixty nuclear weapons between 1946 and 1958, are a particularly notable example. Inhabitants of the Marshall Islands and nearby Guam continue to experience an exceedingly high rate of cancer.

The American Southwest was also the site of numerous nuclear weapons tests that contaminated large swaths of land. Navajo Indian reservations have been polluted by long-abandoned uranium mines where nuclear material was obtained by U.S. military contractors.

One of the most recent testaments to the U.S. military’s horrendous environmental record is Iraq. U.S. military action there has resulted in the desertification of 90 percent of Iraqi territory, crippling the country’s agricultural industry and forcing it to import more than 80 percent of its food. The U.S.’ use of depleted uranium in Iraq during the Gulf War also caused a massive environmental burden for Iraqis. In addition, the U.S. military’s policy of using open-air burn pits to dispose of waste from the 2003 invasion has caused a surge in cancer among U.S. servicemen and Iraqi civilians alike. 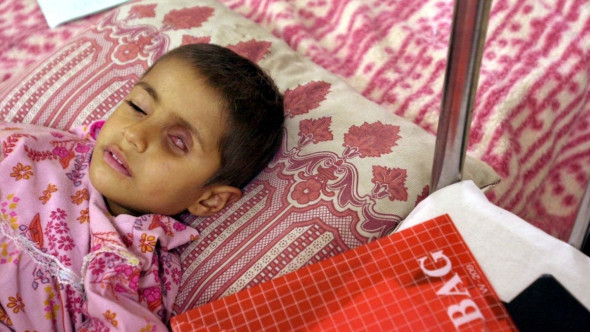 Four-year-old Alla Saleem, who suffers from a tumor in her eye, lies on her bed as she waits for medication Monday, January 15, 2001, at the Gazwan Children’s Hospital in the southern Iraq town of Basra, about 60 kilometers (37 miles) from the border with Kuwait. Iraqi authorities claim that about 300 tons of bombs with depleted uranium were used by the allied forces during the Gulf War bombing campaign, and this is responsible for the increase of cancer cases in the area. According to Doctor Jawal Al-Ali, chief cancer consultant of the Basra teaching hospital and member of the Royal College of physicians in London, the cases have multiplied by 12 since 1991. (AP/Enric Marti)

While the U.S. military’s past environmental record suggests that its current policies are not sustainable, this has by no means dissuaded the U.S. military from openly planning future contamination of the environment through misguided waste disposal efforts. Last November, the U.S. Navy announced its plan to release 20,000 tons of environmental “stressors,” including heavy metals and explosives, into the coastal waters of the U.S. Pacific Northwest over the course of this year.

The plan, laid out in the Navy’s Northwest Training and Testing Environmental Impact Statement (EIS), fails to mention that these “stressors” are described by the EPA as known hazards, many of which are highly toxic at both acute and chronic levels.

The 20,000 tons of “stressors” mentioned in the EIS do not account for the additional 4.7 to 14 tons of “metals with potential toxicity” that the Navy plans to release annually, from now on, into inland waters along the Puget Sound in Washington state.

In response to concerns about these plans, a Navy spokeswoman said that heavy metals and even depleted uranium are no more dangerous than any other metal, a statement that represents a clear rejection of scientific fact. It seems that the very U.S. military operations meant to “keep Americans safe” come at a higher cost than most people realize – a cost that will be felt for generations to come both within the United States and abroad.