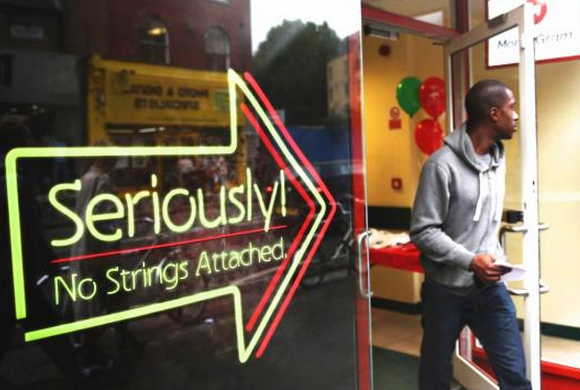 In March, the Consumer Financial Protection Bureau proposed rules to crack down on predatory payday lenders. These rules would prevent many payday lending abuses and give consumers a way out of lenders’ debt trap.

Under the CFPB’s new rules, borrowers would first have to show they could cover their basic living expenses while repaying loans. Lenders could skip “means testing” and instead limit each person’s total borrowing to $500 – with a single finance charge and no repeated charges. Gone would be auto title loans: if you can’t repay, lenders can’t grab your car. (Workers often lose their jobs when they lose their wheels, a “death spiral” that spreads personal and financial chaos.)

A couple of months after the CFPB published its proposed rules, TheHill.com reported financial industry blowback. According to The Hill, a credit reporting agency warns these rules would cut the number of payday loans by 70%. A global consulting firm catering to the financial industry predicts the new rules would reduce “payday loan revenues of small lenders” by 82%.

In a related piece, The Hill parroted bankers’ ridicule that the U.S. Postal Service could provide basic financial services. It spewed lies by omission: “the fiscally unsteady U.S. Postal Service… a federal agency in financial trouble… trying to salvage a floundering operation… [in] a federal agency, which has lost billions of taxpayer dollars over the years.” The report never mentioned the Postal Service’s $1.4 billion operating profit last year alone, or that the USPS’s “financial trouble” was fabricated by Congress. “Trouble” refers to a ludicrous 75-year pension and healthcare pre-funding requirement to cover workers who haven’t yet been born — a fact The Hill conveniently omitted.

Truth is, payday predators take billions a year from paycheck-to-paycheck families. Retired folks struggling to survive on a pittance of Social Security also get snared. Lenders have been running their debt traps for years. Interest rates (effective APR) on payday loans average about 400%. Some loans end up costing borrowers 1,000% a year — 10 times the amount they borrowed. Even the Bible speaks out against such excesses.

This context is absent from The Hill’s reporting. It’s all about how CFPB rules will hurt lenders, and how a ‘troubled’ USPS won’t be able to perform. Most folks applaud attempts to rein in predatory payday lending and other unrestrained “free market” abuses, as the CFPB is trying to do. But some people might add: “What took you so long?”

Choking off the supply of predatory loans, however, provides only half a solution. Millions of hardworking families still can’t make ends meet. As reported in Senate testimony, “Most payday borrowers (69 percent) in Pew’s national survey reported that they turned to the loan to get money to pay ordinary living expenses, including rent, utilities, and credit card bills.” That’s why families need short-term small-dollar loans, and affordable ones.

But that’s not what the “free market” is providing. Last summer, Sen. Elizabeth Warren declared that when lower income families spend about the same on basic financial services as average-income families spend on food, we have a market failure. When there’s a market failure, We the People need to protect and care for ourselves. U.S. Postal Service Inspector General Dave Williams proposed exactly that in January 2014. His game-changing report asserted that the Postal Service could expand its existing financial services to include basics like reloadable cards, check cashing and small-dollar loans, all at affordable rates.

Since the USPS is operating at a profit, post offices and their clerks are paid for. These clerks already handle millions of purely financial transactions a year. They sell postal money orders up to $1,000, handle electronic international remittances, cash tax refund checks, and more.

No conventional business in its right mind would pass up expanding an existing suite of services at low incremental cost, with minimal risk. In fact, a company’s shareholders might boot out its top execs as negligent or incompetent for willfully ignoring such an opportunity.

The Postal Service doesn’t have shareholders. It has all of us: citizens of the United States. We the People.

Confronting massive market failure, people are demanding that the USPS stop foot-dragging and start enabling a low-cost public option for basic financial services. In mid-2014 the nonpartisan U.S. Conference of Mayors adopted a resolution to this effect. Further, Congress must get out of the way by permitting the USPS to act.

In late May 2015, Inspector General Williams published a follow-up report describing ways in which the Postal Service might actually implement postal banking. It’s the only consistent, nationwide answer that anyone has proposed to satisfy demand for affordable small-dollar loans in place of predatory payday lenders.

That’s how the USPS can deliver the other half of the payday lending solution. While We the People, acting through the CFPB, choke off predatory – tightening regulations to ensure fair treatment – your local post office can offer hardworking people the small loans they sometimes need to make it from paycheck to paycheck.

Keep in mind, even this important step will not address America’s rigged economic system and the desperation it spawns, driving lower-income families to borrow small amounts even at exorbitant rates.

It’s the rigged system that really needs fixing. But while pundits and politicians debate major policy changes aimed fixing the rigged economy (or not), We the People must demand prompt action on both halves of the payday lending solution:

Millions of working families and retirees need both of these parts to make a complete solution. And they need it now.