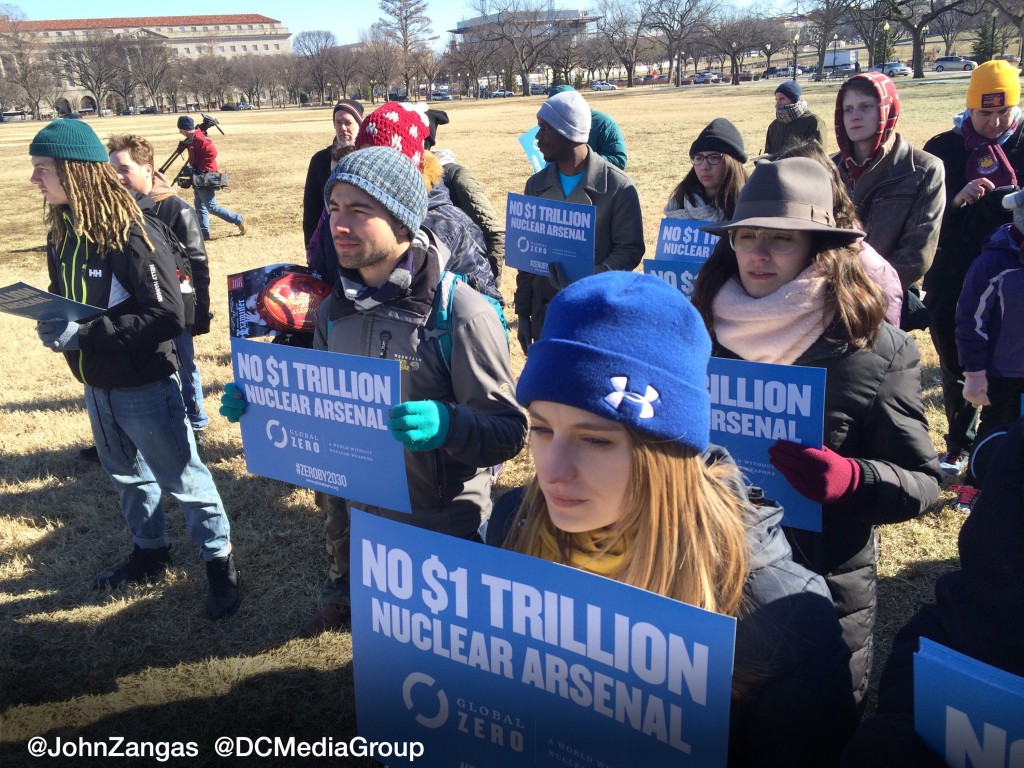 Washington, D.C.- Zero Net kicked off a campaign on Saturday against the Obama administration plan to spend billions on nuclear weapons upgrades over the next decade. Organizers erected a 48-foot Intercontinental Ballistic Missile replica on the ellipse near the White House to dramatize dangers of the aging missiles, saying nuclear weapons are vestiges of the U.S. nuclear Cold War arsenal and should be decommissioned.

Nearby a 3D art exhibit by Joe Hill depicted what a city would look like if a nuclear device were detonated over it.

The U.S. is planning to begin upgrading its nuclear missile systems, which could ultimately cost $1 trillion over the 30 years, according to a federal study.

That’s a waste of money said John-Michael Donahue, campaign Manager at Global Zero. That money could buy “25 million full rides at the average four-year school in the United States,” he said.

The Obama administration campaigned in 2008 on a platform of a nuclear-free world, but the new plan, which includes $355 billion modernization expenditures over the next decade, is an about face on his promise.

“President Obama has cut fewer nuclear weapons than any president since the Cold War,” said Matt Brown, co-founder of Global Zero. “These weapons are out of synch with our security needs and the kind of future we want to create,” he said. He urged the administration to spend money on realistic security concerns such as cyber security.

Next week President Obama will send his budget proposal to congress which will include expenditures for nuclear weapons. “These weapons were designed to destroy cities-they were designed to wipe cities off the map,” said Erin Finucane, Campaign Director with Global Zero.

There are more than 16,000 nuclear weapons worldwide and over 150 Minute Men III silos exist in farm fields across the heartland with hundreds more housed on Air Force bases. Many of these weapons are on trigger-alert.

“Our government could destroy us with the push of a button,” said Brenda Gadam, a student organizer from Notre Dame. She spoke of her generation, born into a nuclear age but interested in environmental issues. “In the event of a nuclear war there won’t be an environment to protect,” she said.

Global Zero will tour the country over the next few months to educate about nuclear weapon dangers. They plan to tour in cities such as Raleigh, Atlanta, Athens, Jacksonville, Miami, Nashville, San Francisco and Portland.