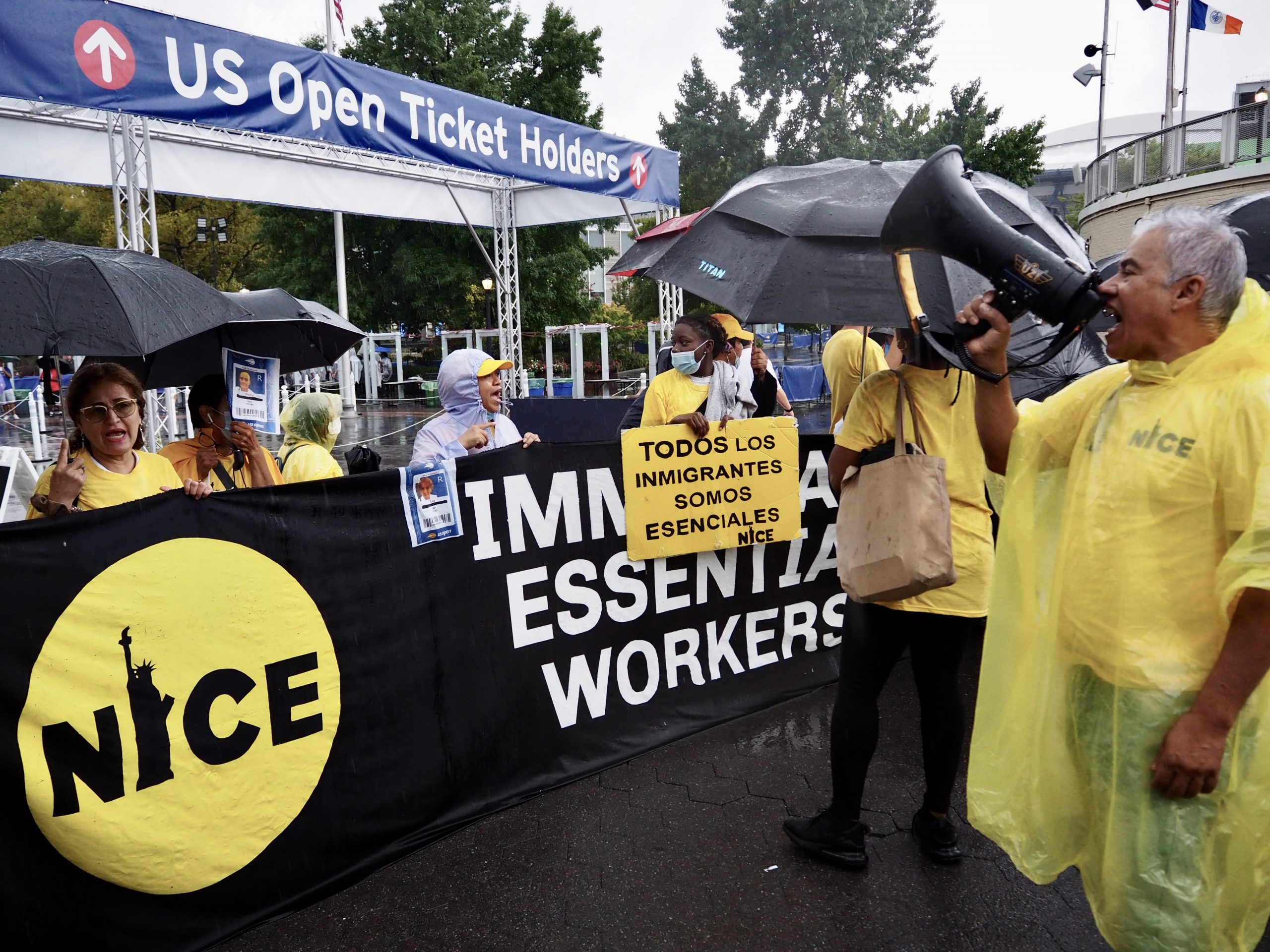 Every year for two weeks between late August and early September, Flushing Meadows Corona Park, home to the Billie Jean King National Tennis Center, is transformed into a glitzy playground for the U.S. Open. Tickets to tennis matches range between $93 to $8,807, and fans sip cold $22 Honey Deuce cocktails. The median income of U.S. Open attendees is about $182,000.

But that glamor does not extend to the workers who keep the U.S. Open running.

On Tuesday, 71-year-old Maria, her sister Luz, and members of New Immigrant Community Empowerment rallied in the shadow of the U.S. Open tennis arena to demand that they receive the wages that were stolen from them. According to NICE, over $4,500 is owed to workers including Maria and Luz, who worked preparing food for the 2021 U.S. Open.

Although the workers were hired by a U.S. Open subcontractor, NICE and the workers are holding the United States Tennis Association ultimately responsible.

Maria and her sister Luz first began working at the U.S. Open last August. The women, who are both elderly and share a single room in Brooklyn with Luz’s daughter and granddaughter, had to seek employment anywhere they could after immigrating from Colombia during the pandemic.

Luz, who was cleaning subways at the time, reached out to Event Aces, a staffing company, to find more work. She was offered a position with Levy Restaurants, a restaurant and hospitality company that was providing concession services for the U.S Open. They promised to pay her $20 an hour. Seeing how easy it was to get hired, Luz was also able to get Maria a job alongside her. But when the women arrived to work they sensed something was amiss.

The women prepared food for the tennis fans watching matches in the scorching summer sun. Both women, well past retirement age, spent over eight exhausting hours a day washing, peeling, and cutting an assortment of fruits and vegetables.

But after a week, the women were abruptly told that they would have to be let go as the company had overhired. Maria was livid.

“I had been working in a factory in New Jersey,” she said. “I left that job to work in the U.S. Open and then after that, I was left with nothing.”

“We were upset because a manager had told us this was a good job and after one week we were let go.”

The women say they never received payment for the work they performed. They have been reaching out to Event Aces, Levy, and the USTA to inquire about their checks to no avail.

“We would call the company and ask when we were getting paid, and they would tell us they will talk to their boss,” said Maria. “A few times I would show up to the office they would say ‘get ready, your pay was going to come’ and it never did.”

Fed up, they reached out to NICE for help and learned that at least one other former U.S. Open worker was dealing with a similar situation with stolen wages. A big part of the problem was that they were not entirely sure who was responsible for paying them. Although they were hired by Event Aces and they worked for Levy, their job was at the U.S. Open and they carried U.S. Open security badges.

“They are all playing games with each other and sending them from one person to the next and that’s not getting them their payments,” said Sara Feldman, Worker and Immigrant Rights Director for NICE, who is helping the U.S. Open workers recover their stolen wages.

Documented was unable to reach Event Aces at the time of publication, but a brief Google search suggests the agency has had a long track record of wage theft. Many reviews for the company seemingly come from disgruntled former employees who claim they are owed back wages.

“I worked a venue for them over 3 weeks ago and still haven’t been fully paid! They’ll make every excuse to not pay employees!” one reviewer wrote.

Levy Restaurant Group, which couldn’t be reached for comment, is one of the largest providers of food and beverage concessions for entertainment and sports venues across the country with annual revenue of $1.5 billion. Nevertheless, it’s not the first time the company has been implicated in wage theft. The company faced several accusations of wage theft in 2014 and 2021. Levy was sued for wage theft, withholding tips, and failing to pay overtime to employees who worked over 100 hours in luxury suites at the U.S. Open from 2004-2009.

Feldman believes the blame lies with the USTA for continuing to do business with the company.

“This all like a puzzle and that’s the fault of the U.S. Open for hiring unscrupulous contractors. That’s why we went right to the U.S. Open and said that this needs to stop,” Feldman said.

For years, the USTA has come under fire from Queens residents who believe the U.S. Open hasn’t been a good neighbor. In 2019, New York City Comptroller Scott Stringer found that the USTA owed the city over $300,000 in back taxes. Residents and community groups alike had blasted the Open for failing to have a significant positive economic impact on the borough as well as having a negative environmental impact on Queens communities. Allegations of wage theft only further aggravate its already strained relationship with Queens residents.

Outside the gates of the Billie Jean King National Tennis Center on Tuesday, responding to the potential media pressure, USTA officials met with NICE members to discuss their allegations of U.S. Open stolen wages and assured them that they would look into the matter.

Standing by in support of the workers was Queens Assemblymember Jessica González-Rojas, she felt cautiously optimistic about the meeting.

“It’s been a year, these three women are owed over $4,500 from last season, and I’m encouraged that the staff is here from the USTA and they made a commitment to look into this issue and make sure they get paid and we are going to hold them accountable to that,” she said.

Back at NICE’s headquarters in Jackson Heights, the members assembled to debrief the day’s action over warm cups of coffee. The atmosphere was filled with jubilation and optimism. As the meeting came to a close Maria, a vibrant and proud woman, reflected her disappointment in the promise of America.