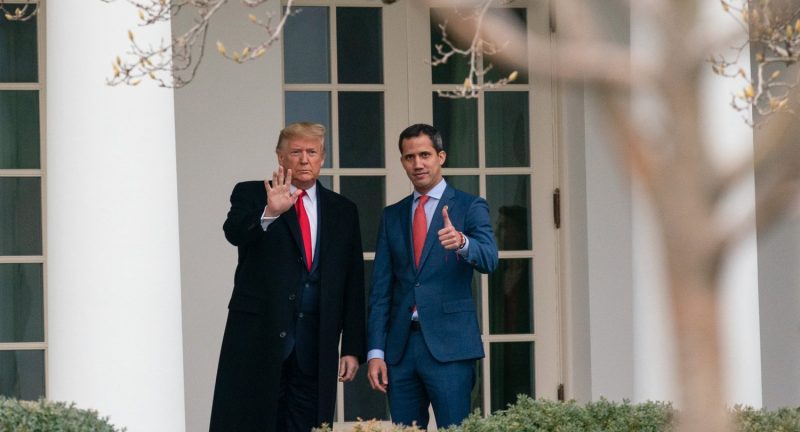 US Policy Toward Venezuela Was Never About Promoting Democracy

As Venezuelans head to the polls this November, it’s clear that the United States’ strategy of supporting the unpopular, far-right leader Juan Guaidó has backfired tremendously.

Last year, then Special Representative Elliott Abrams declared that the Trump Administration was “working hard” to oust Venezuelan President Nicolas Maduro. Now Abrams (currently a senior fellow at the Council on Foreign Relations), together with the Biden Administration, is urging the Venezuelan opposition to participate in the upcoming state and local elections this November.

Washington’s recent backpedaling, however, does not mean they’ve given up on intervening in Venezuela’s internal affairs.

Not surprisingly, Washington has pressured Venezuela’s rightist opposition—led by self-proclaimed president Juan Guaidó and opposition leader Leopoldo López—to abandon their three-year policy of boycotting elections, which they claim are rigged. Electoral participation is a hard pill for both politicians to swallow because it shatters the illusion, nurtured by many in Washington, that Guaidó is the rightful president and that he is just days or weeks from occupying the presidential palace.

The rejection of Maduro’s legitimacy dates back to early 2015 when the Obama Administration declared Venezuela a threat to U.S. national security.  The statement set the stage for Trump’s severe sanctions, designed to intimidate global corporations into severing relations with Venezuela. Francisco Rodríguez, Venezuelan economist formerly with Bank of America and a leading opposition advisor, extrapolated that had it not been for the sanctions oil production in the high-yielding Orinoco River region would have been three to five times greater this year.

In the November elections, the conservative Popular Will party, founded by López, will run candidates on the ticket of an alliance between the country’s major opposition parties. A host of smaller moderate parties are also running candidates who have criticized the sanctions, and unlike Popular Will and its allies, recognize Maduro’s legitimacy. The opposition’s fragmentation increases the possibility that Maduro’s United Socialist Party will achieve a plurality at the polls.

Practically nothing has changed since President Joe Biden took office in 2020, Maduro recently claimed. “There hasn’t been a single positive sign,” Maduro lamented, though he recognized that at least some State Department officials “agree with a political dialogue between Venezuelans.”

Nevertheless, Biden’s policy does depart from Trump’s strategy of inciting a military coup and threatening military intervention. However, despite this approach, the Panam Post noted that the Biden Administration has generally downplayed Venezuela’s importance and “turned its eye toward Nicaragua,” where the prospects for regime change are brighter.

The real change in 2021 has been in the prodding of Maduro to accommodate U.S. economic and political interests, as opposed to regime change. Days after the 2020 U.S. elections, Abrams recommended to Biden that he no longer use sanctions as a regime-change strategy against Venezuela. Instead, the new approach offers to modify or lift sanctions in return for concessions from Maduro.

Maduro, in an interview with Bloomberg, indicated that he knew how to play the game. “Bondholders know it’s possible to invest in Venezuela,” he said, “as long as this whole persecution and these sanctions aren’t there.”

In response, Bloomberg reporter Erik Schatzker asked, “When negotiations start, if they do, will you look for an all-or-nothing agreement, or will you accept a gradual process? How far are you willing to go with this [economic] reopening?”

Washington’s leverage approach reveals that policy toward Venezuela was never really about democracy. Exerting pressure to attain concessions for U.S. corporate interests is hardly tantamount to promotion of democratic ideals.

Carlos Ron, Venezuela’s deputy minister of foreign affairs for North America, tells The Progressive that, despite Washington’s posturing, it “has never had any real concern about Venezuelan democracy and has attempted to undermine and dismiss all election processes since President Chavez.”

Anxious for Biden to lift the sanctions, Maduro’s concessions are tilted in favor of the Popular Will party. In July, Maduro released Popular Will’s Freddy Guevara, accused of fomenting violence, from prison. Not surprisingly, it was Guaidó who named the opposition’s negotiating team for talks, which are being held with the Venezuelan government in Mexico.

White House spokesperson Ned Price has announced that Washington will “ease sanctions” if there is “significant progress” in negotiations between Maduro and the opposition. Similarly, Abrams suggests the possible “relaxation of sanctions or agreement to use some frozen assets for health and related objectives,” depending on the concessions that Maduro is willing to grant.

Just as in the case of the administration’s horse-trading approach for obtaining economic concessions, its piecemeal strategy on the political front favoring leaders on the right makes it hard to make the case that democracy is, or ever has been, Washington’s end game when it comes to Venezuela.

This status belies Guaidó’s unpopularity in Venezuela and the fact that Popular Will is a relatively small party on the radical fringe of the opposition. Indeed, the privileged treatment given Guaidó and his party by Washington has harmed the opposition as a whole, given the fact that other anti-government parties and leaders have greater credibility within Venezuela.

Rivalry that exists between Popular Will and its closest allies going into the November 21 elections is only the tip of the iceberg. As of September 6, there were 70,244 candidates—the majority of whom are anti-government—vying for 3,082 positions. While the four largest parties including Popular Will are united in an electoral alliance, other groupings blame them for their botched attempts at regime change under Washington’s guidance.

Opposition pollster Luis Vicente León predicts an abstention rate of 50 to 60 percent, in spite of the national and international attention that these contests have received. According to León, the problem for the opposition is its extreme fragmentation and the fact that, in some cases, it runs “candidates who are unpresentable, who arrive on the scene as a result of a political agreement.”

U.S. sanctions have wreaked havoc on the Venezuelan economy and people. How could it be otherwise when for a century Venezuela has been totally dependent on the export of oil which is now being blocked by sanctions against any firm anywhere in the world that dares to purchase the product.

On the political front, U.S. policy toward Venezuela has also had a devastating effect: it exacerbates polarization at the expense of a middle ground of opposition moderates as well as Maduro critics on the left. The moderates, as opposed to Popular Will, are more in tune with the concerns of Venezuelans; they oppose the sanctions and favor focusing on solutions to concrete economic problems rather than regime change.

The big dilemma for the opposition will be getting out the vote in November. The predicted 50 percent abstention rate in November reflects the widespread repudiation of the entire political class among voters. In effect, half the country blames the government for the nation’s pressing economic problems, as well as blaming the opposition for having fallen for Washington’s regime-change agenda.

In the last three years, the main parties of the opposition took credit for the high abstention rate in Venezuelan elections, claiming that those who did not vote were a “silent majority” who sympathized with their cause. Now that these same parties have opted for electoral participation, the expected high abstention rate for November’s election is a clear indication of their overestimated popular support.

If this is indeed the case, the Venezuelan right’s failure to obtain a sizeable majority among eligible voters will demonstrate the folly of Washington’s continued recognition of Juan Guaidó as Venezuela’s true president.