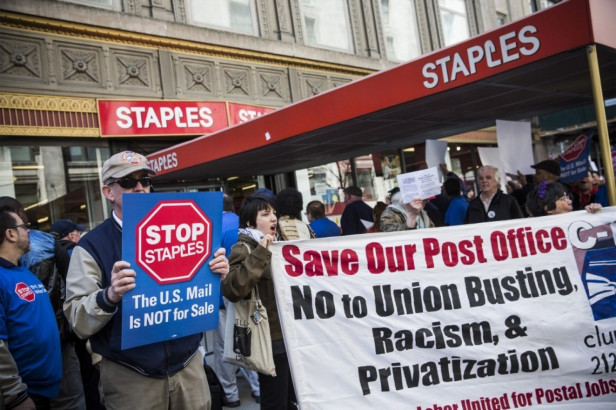 When the U.S. Postal Service (USPS) and Staples birthed a retail partnership in 2013, USPS said “it’s time to celebrate.”

But now, that program has been sentenced to death and it is postal labor leaders who are rejoicing. They cheer the demise of a program that had been the target of a vigorous campaign by postal unions that don’t want the post office privatized.

USPS will discontinue retail services at Staples stores by the first week in March, according to the American Postal Workers Union (APWU), which led the fight.

The union cast the decision as “a big win for the public as well as the 200,000 members of APWU and the union’s allies.” The union waged a national “Stop Staples” campaign and said it is immediately ending its boycott of the company.

The move resulted from a National Labor Relations Board (NLRB) order issued on Wednesday. The board adopted an administrative law judge’s ruling from November.  It “requires the Postal Service to discontinue its retail relationship with Staples,” said Darlene Casey, a Postal Service spokeswoman. “The Postal Service intends to comply with that order.” USPS could have appealed, but decided not to fight.

APWU initiated the NLRB complaint against the Postal Service for improperly subcontracting work to Staples that could have been done by postal employees. But while the NLRB order was the direct link to the program’s downfall, APWU President Mark Dimondstein said that legal tactic was just one part of a larger strategy that included demonstrations, educating customers and attending company stockholder meetings.

Postal officials had described the “Retail Partner Expansion Program” with Staples, which began under former Postmaster General Patrick R. Donahoe, as a project “designed around a few simple ideas — service, convenience and providing options to customers.”

Union officials had no problem with that in theory, but they don’t like non-postal workers doing postal work. APWU argued the Staples plan “would diminish the USPS brand by having mail processed in unsecured locations by workers who had little or no training” in postal operations.

“We’re absolutely for broader access” to postal services, Dimondstein said in an interview. The union was willing to participate in a program providing postal services at commercial retail outlets, as long as it was postal employees providing the service. But APWU was against having untrained, lower paid store clerks “protecting the sanctity of the mail.”

“These kind of misguided privatization schemes threaten the existence of the Postal Service,” he said.

Carrie McElwee, Staples’ public relations director, said the USPS program was in more than 500 of its locations, “which is not even half of our 1,267 U.S. stores. We don’t have details available on the number of customers.” But they “will continue to have access to shipping services through our relationship with UPS,” she said.

The program began in a few pilot cities with mini-post offices in stores where, a 2013 USPS press release said “customers will find a familiar looking counter resembling a mini post office containing the most popular postal products and services.” The next year, APWU held demonstrations, declaring “the U.S. mail is not for sale,” outside of Staples stores.

“This is a big win,” Dimondstein said. “Staples is out of the mail business which they should never have gotten into.  Our members take great pride in their training and their responsibilities; they swear an oath; they perform a public service. The quality of service at a Staples store isn’t comparable.  The public should have confidence in the mail. Important letters, packages and business correspondences shouldn’t be handled like a ream of blank paper.”

“This is also a win for those who care about the neighborhood post office,” his statement continued, “and for all those in our society who think that workers should earn a fair living wage with decent health care and a pension, rather than the Staples model of minimum wage, part-time hours and no benefits.”

The Staples boycott was joined by a number of other unions “perhaps most importantly, the nation’s two largest teachers’ unions, the National Education Association and the American Federation of Teachers,” according to APWU. “A significant portion of Staples revenues is generated by the sale of school supplies.”

McElwee would not say if the boycott had any impact on sales.

“The public Postal Service is a national treasure that was treated like a cheap trinket by the former Postmaster General…” Dimondstein said. “This was bad for the consumer, bad for the USPS brand and an insult to our dedicated members.”