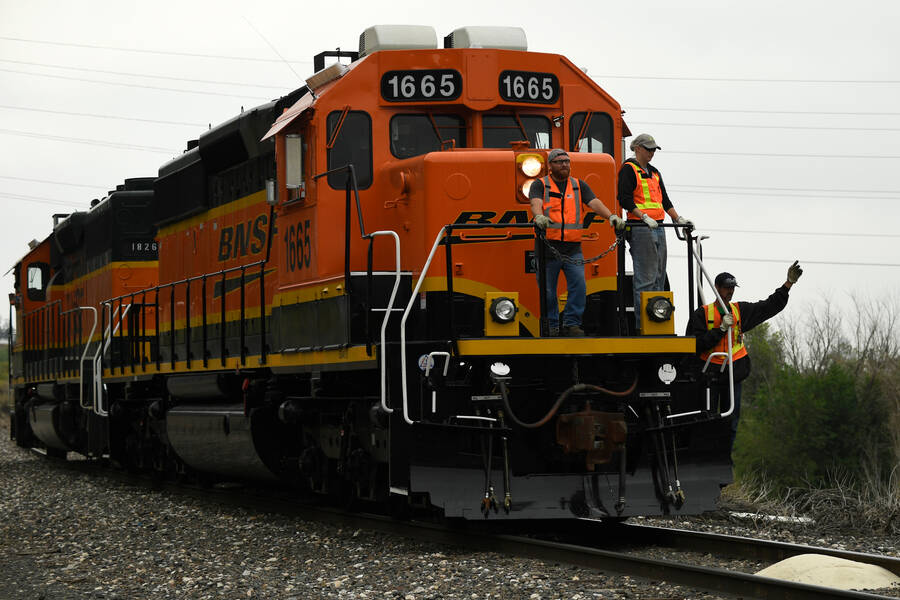 US Railroad Workers Inch Closer To A Possible National Strike

Above Photo: Joe Amon / The Denver Post Via Getty Images.

After Biden Appointed An Emergency Board To Help Resolve The Labor Dispute.

Rail Workers Warn: “We Have The Ability To Stop The Trains From Moving.”

After waiting over two years to secure a new union contract, and still reeling from the impacts of Wall Street-ordered cost-cutting measures, 115,000 beleaguered workers who operate the nation’s freight railroads are inching closer towards a possible strike, which could come as soon as September.

In an effort to drive down operating expenses and reward their wealthy shareholders, in recent years railroad companies have implemented “precision scheduled railroading,” or PSR — a version of just-in-time, lean production that centers on reducing the workforce and closing facilities.

“For years, they cut and cut and cut. It didn’t matter which department or terminal, it was indiscriminate,” said Michael Paul Lindsey, an Idaho-based locomotive engineer with Union Pacific.

Over the past six years, the major Class I railroads like BNSF, Union Pacific, CSX and Norfolk Southern have slashed their collective workforce by 29 percent (around 45,000 workers), leaving the industry woefully understaffed and putting extra strain on workers already accustomed to long, irregular hours.

Lindsey said the severe staffing shortages have resulted in “constant chaos and crisis,” with workers being called at all hours, day and night, expected to take on assignments they were not initially scheduled for.

Cost-cutting has also meant freight trains are running with more cars and more cargo than existing infrastructure is equipped to handle, or else misrouting rail cars just to get them moving. This cost-cutting, along with a labor shortage, have been major contributors to the supply-chain crisis.

Meanwhile, the railroad companies remain highly profitable, with owners raking in $183 billion in stock buybacks and dividends since 2010.

Since January 2020, two coalitions of 12 rail unions — dubbed the “United Rail Unions” — have been in negotiations with the major railroad companies, represented by the National Carriers’ Conference Committee. The unions include the Teamsters-affiliated Brotherhood of Locomotive Engineers and Trainmen (BLET) and the Sheet Metal, Air, Rail and Transportation Workers-Transportation Division (SMART-TD).

With bargaining kept behind closed doors, few specifics of the negotiations have been made public until recently. But in addition to raises and healthcare, workers say one of the major points of contention is staffing. While publicly acknowledging that the labor shortage constitutes a crisis and promising to hire and retain more employees, the railroads have demanded that freight train crews be reduced from two workers to only one.

“For the rail carriers to say ‘we agree it’s a staffing crisis’ when they and they alone have the ability to alleviate that staffing crisis, but instead choose to exacerbate it, it’s disingenuous,” said Ron Kaminkow, a locomotive engineer who previously worked for Norfolk Southern and now works for Amtrak in Nevada.

Kaminkow is a leader with Railroad Workers United (RWU), an inter-union, cross-craft solidarity caucus that brings together rank-and-file rail workers across North America. As the current round of contract bargaining reached the two-year mark in January, RWU’s steering committee adopted a resolution urging rail workers and their unions to prepare for a possible strike.

Divided into a dozen separate craft unions and subject to the complex bargaining process of the 1926 Railway Labor Act, it has become extremely rare for U.S. railroad workers to go on strike. The last such work stoppage occurred in 1991 and was brought to a swift end by an order of Congress in less than 24 hours.

“I really, really think that this may actually lead to a legitimate strike,” Lindsey, who is a member of the BLET, told In These Times. “The reason why is the railroad has chosen this as their hill to die on: they want one-man crews. They’ve made it clear they are not bowing down.”

Earlier this month, BLET members voted to authorize a strike with over 99 percent approval. Meanwhile, SMART-TD’s general chairpersons have taken the First Step towards authorizing a work stoppage.

“There is no fact-based argument that the rail carriers cannot afford the union’s proposals nor do they even make such a claim. Rather, consumed by corporate greed that would make the robber barons of old blush, they just simply don’t want to share their record profits with their employees,” explained Dennis R. Pierce, national president of the BLET.

“The truth is the three biggest railroads at the negotiating table don’t want to part with any of their record profits, nor do they wish to reward the workers who have busted their asses for the last three years without a raise, to get them those record profits,” said Jeremy Ferguson, president of SMART-TD.

In a recent statement, Association of American Railroads president and CEO Ian Jefferies said: “On average, railroaders earn $135,000 annually in total pay and benefits, which is higher than the average compensation of industries that employ 94 percent of the U.S. workforce. Railroads remain committed to reaching an agreement that provides their employees well-deserved compensation increases that keep them among the best paid in the nation.”

Lindsey said such messaging is intentionally misleading, and accused the rail companies of “trying to turn the average American against each other.”

“They’ll tell people: ‘these guys make $130,000 a year and they’re whining and complaining because they’re just a bunch of spoiled union employees.’ They don’t mention that we work on-call, 365 days a year, 70 to 90 hours a week on-duty, not including off-duty time at a hotel away from home,” said Lindsey.

The average salary for a rail conductor is $67,660 and $73,490 for an engineer, according to the Bureau of Labor Statistics.

The unions and railroads entered into mediation earlier this year when it became clear an agreement would not be achieved through direct bargaining. The mediated negotiations reached an impasse in June.

In accordance with the Railway Labor Act’s cumbersome process, the next step was a mandatory 30-day “cooling-off” period, at the end of which either party could have entered into “self-help” (meaning a strike or lockout) unless President Joe Biden appointed a Presidential Emergency Board (PEB) to examine the dispute and produce recommendations on a settlement within another 30-days.

This month, at the end of the cooling-off period, Biden did indeed step in and appoint a PEB—consisting of three legal experts who have helped resolve labor disputes in the past — delaying the possibility of a strike.

Biden’s move came as no surprise, especially since the union leadership, railroad management, and shippers all openly wanted him to step in.

“Anybody who thought Biden wouldn’t appoint a PEB was foolish,” Kaminkow told In These Times. “There’s too much at stake politically. He also knows that we will kick the railroads’ ass because there would be rock solid support for this strike and the economy would quickly grind to a halt.”

In the United Kingdom last month, rail workers with the National Union of Rail, Maritime and Transport Workers (RMT) had widespread public support when they staged a three-day strike over similar issues.

The PEB’s recommendations are expected by mid-August, after which there will be yet another 30-day cooling-off period during which the parties can either accept or reject those recommendations. If an agreement still has not been reached by then, which would be mid-September, the Railway Labor Act allows for the unions to go on strike.

Nevertheless, Congress could quickly stop the strike by intervening in any number of ways, including ordering further cooling-off periods, mandating arbitration or implementing the PEB’s recommendations.

“The parties can negotiate around the PEB recommendations that will encourage an agreement. That is what the unions want: they want a contract that their members will ratify. So, I don’t think a strike is imminent,” Regan said in a recent interview.

Kaminkow said he has not seen the rail unions carrying out a robust contract campaign or doing the kinds of organizing and mobilizing necessary to prepare for a work stoppage.

“You would never know that we are potentially on the verge of a national rail strike which would encompass pretty much every rail terminal in the United States,” he said. “It’s unfortunate because the rank and file is so fired up and itching for a fight.”

Lindsey noted that the BLET is “not very transparent at the national level,” though he added that his local union representatives are helpful. “Sadly, I haven’t really gotten much of any good quality information out of them on the national level. They’ve been pretty quiet,” he said.

“We’re in the best position we have ever been in to wage a confrontation with the big rail carriers,” Kaminkow said. “To squander this and have everybody simply go to work and go home and watch the news and see if there’s anything on there about the railroad is really missing a golden opportunity to mobilize and motivate the rank and file.”

Still, rank and file union members are speaking out.

In April, Lindsey penned a letter to the Surface Transportation Board — the federal agency that regulates freight rail — explaining why so many workers are quitting the industry and detailing the increasingly grueling schedules. The letter was published in the trade magazine Railway Age and has resonated with railroad workers across the country, inspiring them to speak out through letters of their own or more creative means, including a TikTok page that now has gained over 22,000 followers.

At the insistence of members, the BLET recently launched a public outreach campaign. In April, the union — alongside SMART-TD — held a protest outside the shareholders meeting of Berkshire Hathaway, which owns BNSF Railway.

“I love the railroad industry. It’s my life’s passion,” said Lindsey. “I’ve always wanted the industry to strive for something better, which in America it just is not. It doesn’t matter whether its freight rail or passenger rail, in a lot of ways we are so far behind where we could be.”

“Whether or not we actually go on strike, we need to utilize everything at our disposal to impress upon the rail carriers that we are ready, willing, able, mobilized, educated and vehement in our determination,” Kaminkow said. “Even if we do not strike, or if we do strike and are ordered back to work in a matter of hours, just knowing that we have that power, that we have the ability to stop the trains from moving — it shows us that we’re the ones that really run the railroad, not them.”