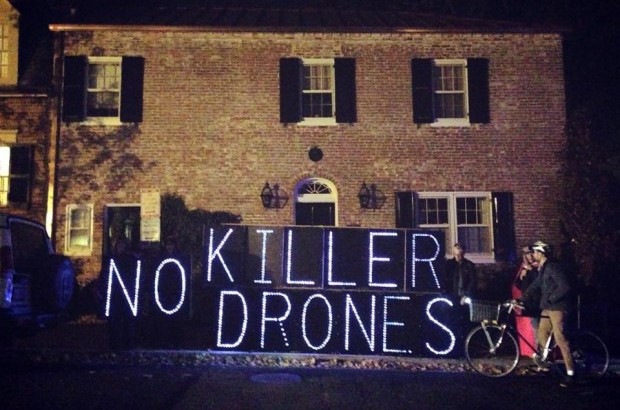 Above Photo: by Jenna Pope

NEW YORK – In response to a court order in a lawsuit filed by the American Civil Liberties Union, the Obama administration has released a redacted version of the White House document that sets out the government’s policy framework for drone strikes “outside the United States and areas of actual hostilities.”

The Presidential Policy Guidance, once known as “the Playbook,” was issued by President Obama in May 2013 following promises of more transparency and stricter controls for the drone program. But while the administration released a short “fact sheet” describing the document, it did not release the PPG itself, or any part of it.

In February, U.S. District Judge Colleen McMahon, who is presiding over a Freedom of Information Act lawsuit filed last year by the ACLU, expressed skepticism that the document could be withheld in its entirety and ordered the government to submit the PPG for the court’s review. Rather than continue to defend its withholding of the entire document, the government told the court that it would prepare a redacted version of the PPG for public release. Justice Department lawyers turned the PPG and several other documents over to the ACLU on Friday evening.

“We welcome the release of these documents, and particularly the release of the Presidential Policy Guidance that has supplied the policy framework for the drone campaign since May 2013,” said ACLU Deputy Legal Director Jameel Jaffer. “The PPG provides crucial information about policies that have resulted in the deaths of thousands of people, including hundreds of non-combatants, and about the bureaucracy that the Obama administration has constructed to oversee and implement those policies. The PPG should have been released three years ago, but its release now will inform an ongoing debate about the lawfulness and wisdom of the government’s counterterrorism policies. The release of the PPG and related documents is also a timely reminder of the breadth of the powers that will soon be in the hands of another president.”

The document released today provides many new details about the policy standards that govern drone strikes. It also provides a window into the administration’s “nominations” process for targeting individuals with lethal force or for capture, and it describes the government’s procedures for conducting “after action reports” to assess the consequences of its lethal and capture operations. But questions remain about where the PPG applies, whether the president has waived its requirements in particular instances, and how the PPG’s relatively stringent standards can be reconciled with the accounts of eye witnesses, journalists, and human rights researches who have documented large numbers of bystander casualties.

Together with the PPG, the government also released four Defense Department documents, two of which it had previously released to the ACLU with more redactions:

The documents released today come in one of three ACLU FOIA lawsuits seeking records on targeted killing. In the other cases, two appellate courts have held that some of the secrecy surrounding the drone campaign is unlawful. In 2014, the Second Circuit Court of Appeals in New York ordered the release of a July 2010 memo from the Justice Department’s Office of Legal Counsel authorizing the killing of a U.S. citizen, Anwar al-Aulaqi. That case is again before the Second Circuit. In 2013, the D.C. Circuit Court of Appeals found that the CIA could not lawfully refuse to confirm or deny that it had an “intelligence interest” in the drone program. That case was dismissed in April 2016.

DOD Report on Associated Forces is at: https://www.aclu.org/report-associated-forces-2014

DOD Report on Process of Determining Targets of Lethal or Capture Operations is at:https://www.aclu.org/dod-report-process-determining-targets-lethal-or-capture-operations

More information and all case documents are at: https://www.aclu.org/cases/aclu-v-doj-foia-case-records-relating-targeted-killing-law-policy-and-casualties

This press release is at: https://www.aclu.org/news/us-releases-drone-strike-playbook-response-aclu-lawsuit