Above Photo: From Noaa.gov

July 10, 2019 Coastal communities across the U.S. continued to see increased high tide flooding last year, forcing their residents and visitors to deal with flooded shorelines, streets and basements — a trend that is expected to continue this year. The elevated water levels affected coastal economies, tourism and crucial infrastructure like septic systems and stormwater systems, according to a new NOAA report.

The report, 2018 State of High Tide Flooding and 2019 Outlook, documents changes in high tide flooding patterns at 98 NOAA tidal gauges along the U.S. coast that are likely to continue in the coming years.

High tide flooding, often referred to as “nuisance” or “sunny day” flooding, is increasingly common due to years of relative sea level increases. It no longer takes a strong storm or a hurricane to cause flooding in many coastal areas. 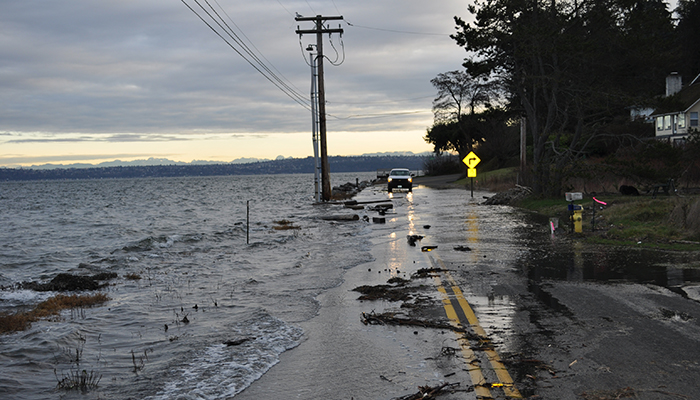 According to the report, nationally, five days of high tide flooding occurred within coastal communities, tying the record set in 2015. Flood days broke records in the Northeast, with a median of 10 days, and the Eastern Gulf of Mexico at five days, due to a combination of active nor’easter and hurricane seasons combined with sea level rise.

NOAA has identified more than 40 locations whose annual rates of high tide flooding are rapidly increasing. Annual rates at 25 other locations are also trending upwards but more gradually. These increases suggest a much wetter future for many coastal areas.

“Once communities realize they are susceptible to high tide flooding, they need to begin to address the impacts, which can become chronic rather quickly,” said William Sweet, Ph.D., an oceanographer for NOAA’s Center for Operational Oceanographic Products and Services and lead author of the report. “Communities find themselves not knowing what to expect next year and the decades to come, which makes planning difficult. Our high tide projections can play a vital role in helping them plan mitigation and other remedies.”

Sweet and his co-authors project that in 2019, the national high tide flood frequency is expected to double from the year 2000 across U.S. coastlines, with some regions seeing an even larger increase:

El Nino conditions that are predicted to persist through 2019 are a factor which contribute to the increase, along with continued sea level rise.

NOAA maintains ocean observing infrastructure, including more than 200 permanent water level stations on the U.S. coasts and Great Lakes, and is the nation’s authoritative source for historic and real-time data, forecasts, predictions, and scientific analyses that protect life, the economy and the environment on the coast.

For a storymap based on this report, visit:
https://tidesandcurrents.noaa.gov/HighTideFlooding_AnnualOutlook.html