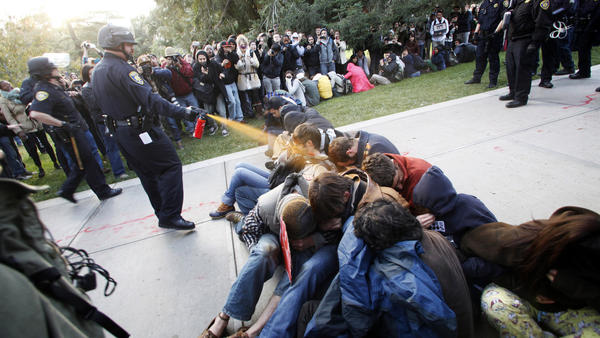 Due To ‘Serious Questions’

Citing “serious questions” about whether UC Davis Chancellor Linda P.B. Katehi violated policies on employment of her family members and the use of contracts to remove negative information from the Internet, UC President Janet Napolitano placed Katehi on leave Wednesday night pending the outcome of “a rigorous and transparent investigation.”

“Information has recently come to light that raises serious questions about whether Chancellor Katehi may have violated several University of California policies, including questions about the campus’s employment and compensation of some of the chancellor’s immediate family members, the veracity of the chancellor’s accounts of her involvement in contracts related to managing both the campus’s and her personal reputation on social media, and the potential improper use of student fees,” Napolitano’s office said in a statement issued Wednesday night. “The serious and troubling nature of these questions, as well as the initial evidence, requires a rigorous and transparent investigation.”

Napolitano said she would appoint an independent investigator to compile a report before the start of the next academic year and that UC Davis Provost Ralph Hexter would fill the chancellor’s post on an acting basis.

“I am deeply disappointed to take this action,” Napolitano said. “But Davis is a strong campus, nationally and internationally renowned in many academic disciplines. I’m confident of the campus’s continued ability to thrive and serve California students and the Davis community.”

In a two-page letter to Katehi, Napolitano wrote that she would be placed on leave for at least 90 days as a probe is conducted into the employment of her daughter-in-law and salary increases for her that have boosted her pay by $50,000 over two and a half years.

Napolitano also wrote that she had concerns about whether Katehi made “material misstatements” about her role in UC Davis spending $175,000 on an attempt to scrub the Internet of negative stories about the school – and Katehi herself – resulting from the 2011 pepper spraying of students.

Katehi has said publicly she knew nothing about the efforts or the contract language, but Napolitano wrote that her statements to the media and to Napolitano contradict evidence that Katehi had “multiple interactions with one of the vendors and efforts to set up meetings with the other.”

“This smacks of scapegoating and a rush to judgment driven purely by political optics, not the best interests of the university or the UC system as a whole,” Guzman wrote. “The Chancellor welcomes an independent, objective investigation and a full release of all relevant documents and public records.

“Make no mistake: we intend to vigorously defend Linda’s professional reputation and her standing as Chancellor of the university she loves.”

The stunning move by Napolitano came after a daylong standoff between Katehi, who issued a midday statement saying she planned to stay in her job, and Napolitano’s office, which would not confirm whether Katehi had been told to resign.

Katehi remained out of sight Wednesday and canceled two appearances that had been scheduled as part of a public relations effort she began last week to repair the damage from a series of controversies over the last two months.

Students continued their efforts to force her resignation, staging yet another demonstration on campus against her, and UC officials would say nothing about her status other than to confirm she remains in her job.

Katehi gave no sign that she was considering quitting.

“This email is to let you know that I am 100 percent committed to serving as Chancellor of UC Davis,” she wrote to faculty in the midday email. “I sincerely appreciate the strong outpouring of support I continue to receive from the campus community and I very much look forward to continuing to lead the campus to greater levels of success and excellence in the future.”

Katehi has been under fire for a series of controversies involving her acceptance of private corporate board seats and the university’s decision to spend at least $175,000 to clean up its online image after the 2011 pepper spraying of students.

One email from Sacramento-based IDMLOCO dated March 7 suggested a way of “inserting some positive Linda Katehi press into the conversation once the time is right.”

Other documents showed campus officials received regular reports on how Katehi’s reputation was being affected by media reports.

“Over the weekend, the conversation volume spiked to the highest point since the negative stories about Chancellor Katehi began,” a March 16 email from IDMLOCO stated. “The conversation spike was surrounding the Mrak Hall 5th floor sit-in that began on Friday, where students protested for the chancellor’s resignation.

“Resignation has become the primary theme in the social conversation over the weekend,” the email stated, noting that “currently, the sentiment is 48 percent negative, 15 percent positive and 37 percent neutral.”

Another firm, Nevins & Associates of Baltimore, was hired earlier and paid more than $90,000 to repair the image of the university and the chancellor after the pepper-spray incident.

In an Oct. 16, 2012, email from company founder David Nevins to Katehi chief of staff Karl Engelbach, Nevins spelled out a plan to “highlight the accomplishments of UC Davis and Chancellor Katehi.”

“This plan will separate both the university and Chancellor Katehi from the events that occurred last November and it will strengthen the university’s brand against reoccurring backlash,” Nevins wrote, signing the email, “David.”

The documents are among hundreds released late Wednesday in response to requests The Bee filed in early March, and the university said more would be forthcoming.

Katehi had been in the middle of a public relations campaign to offer apologies for her missteps and vow to move the university forward, but those efforts abruptly halted Tuesday when she canceled an interview scheduled for Wednesday on Capital Public Radio’s Insight program.

A public forum that had been set for Thursday for Katehi to answer questions on campus was also canceled.

Katehi was not seen in her office Tuesday, and the elevators in Mrak Hall did not allow access to the fifth floor, where her office is located. Stairwell doors to that floor also were locked.