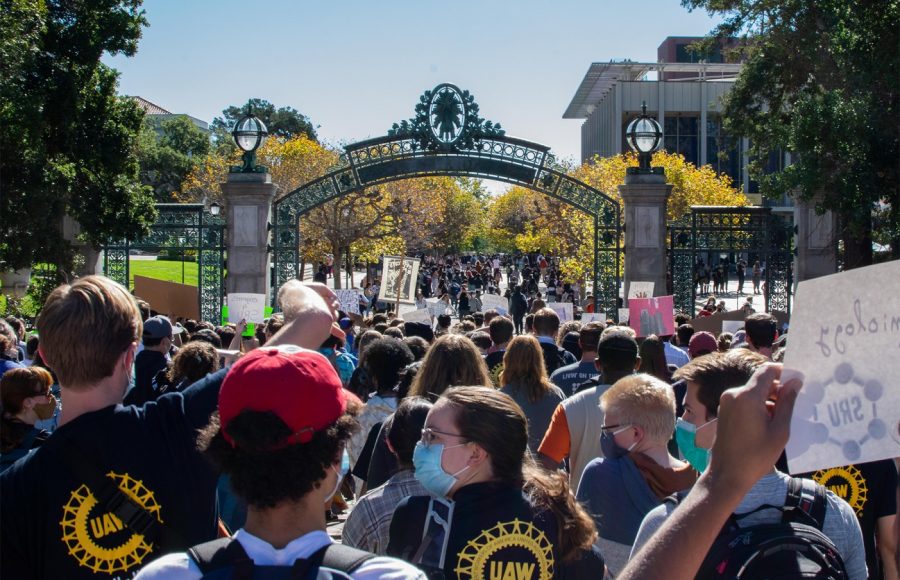 The decision came after nearly 11,000 student researchers across the state voted Nov. 19 to authorize a strike. Out of the members who voted, 97.5% voted in favor of a strike, according to a press release from United Auto Workers, the parent union that SRU is joining.

“This is the single biggest new union filing in any industry, definitely this year if not this decade,” said UC Berkeley student researcher Tanzil Chowdhury. “Seventeen thousand new workers just joined the labor movement, which is historic.”

In the coming months, SRU will negotiate with the university to establish a contract, according to campus student researcher Tarini Hardiker. She said student researchers are being asked to fill out a bargaining survey in order to compile a set of demands that represents the majority view of the union’s members.

Hardiker said she expects SRU to negotiate for key issues including increased and timely pay, improvements to workplace protections from discrimination, resources for student-parents and international students and a concrete path for recourse if the terms of the contract are violated.

“We look forward to beginning good-faith negotiations on a multi-year collective bargaining agreement in the months ahead,” said university spokesperson Ryan King in an email. “UC believes our graduate student researchers make important contributions to the University.”

In order to unionize, student researchers organized through collaboration with local and state legislators and submitting signed union cards, according to Hardiker.

King noted that while the university agreed that most graduate student researchers should be represented by the bargaining unit, it was unclear whether some researchers fit the definition of student employee. The recognition agreement now defines who is a graduate student employee, and the university and UAW agreed to resolve conflicts about the definition in the future, according to King.

“The sheer amount of work and organization that went into this has been very rewarding and fulfilling but also challenging,” Hardiker said. “I was ecstatic. I was too excited to sit, too excited to stand. I was just jumping around for a bit.”

Hardiker said she is looking forward to beginning next year as a union worker with a contract and knowing that graduate student instructors and lab workers in the university will have the option to unionize.

SRU will join 14 other bargaining units among the entire UC system, represented by eight unions, according to King.

“We once again were willing to band together and wield the threat of a strike,” Chowdhury said. “We know and the university knows that this university is nothing without its student researchers. This is something that we actually fought for and won.”