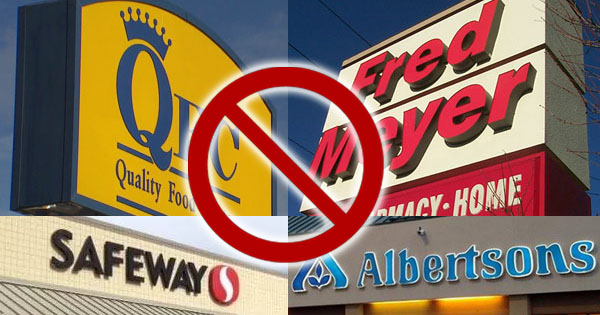 Unions Say Proposed Merger Would Be ‘Devastating For Workers And Consumers.

Call On Anti-Trust Regulators To Block It.

(In Washington state, Kroger operates as Fred Meyer and QFC, and Albertsons also operates as Safeway.)

Today it was reported that grocery store giant Kroger could announce a deal this week to buy rival grocery store company Albertsons, resulting in a potential merger that would significantly harm local grocery store industries, essential grocery store workers, and customers across the western US from Southern California to the Canadian border to Colorado.

“The proposed merger of these two grocery giants is devastating for workers and consumers alike and must be stopped. Just as our UFCW workers stood together to negotiate landmark new contracts with both Kroger and Albertsons/Safeway within the last year across the western US, we will stand united to fight for access to nutritious food, a safe shopping experiences, and investments in good jobs in our communities. Essential UFCW grocery store workers emerged stronger from the COVID-19 pandemic, winning improved protections against the virus, store violence and other threats. Standing together, we know our voices are stronger than the corporations’ anti-worker rhetoric,” said Faye Guenther, President of UFCW 3000.

This proposed merger of two of the largest grocery companies in the nation will no doubt create a monopoly in the grocery industry for many communities, with one company owning a $47 billion market share.

UFCW’s members have been a leading national voice on enforcing federal and state antitrust laws as well as forwarding the values of protecting a fair marketplace that prevents corporations from using monopoly power to exploit customers and workers. We are asking the appropriate administrative and elected officials to step in and stop this merger and protect workers and consumers.