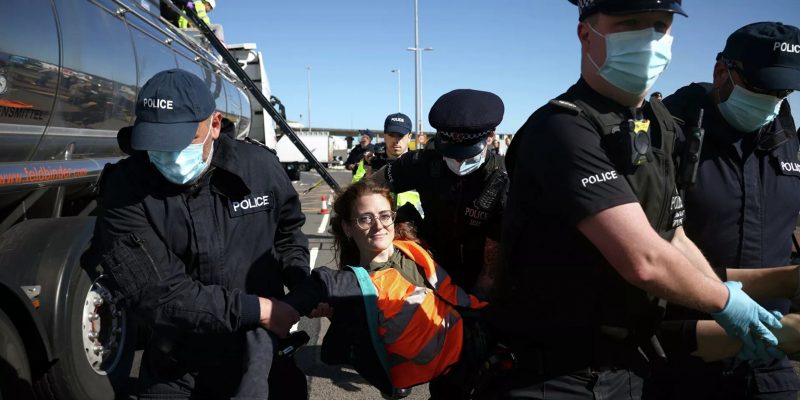 London  – Insulate Britain campaigners, an environmental group calling on the UK government to implement a better national home insulation program, blocked on Monday the M25 highway encircling London for the sixth time, despite a court order warning them of jail terms if they carried on disrupting traffic on UK’s busiest road.

“You can throw as many injunctions at us as you like, but we are going nowhere. You can raid our savings and confiscate our property. You can deny us our liberty and put us behind bars. But that is only shooting the messenger. The truth is that this country is going to hell unless you take emergency action to stop putting carbon into the air,” Insulate Britain spokesperson Liam Norton said in a statement.

Climate Change protesters have been blocking off the M25 again this morning. Insulate Britain have been at Junction 14 for Heathrow #HeartNews pic.twitter.com/avMQecWF9a

BREAKING: Insulate Britain activists have defied a court injunction and blocked the M25 for a sixth time, at J14 at Heathrow Airport.@InsulateLove pic.twitter.com/jeZ3RZ2TEu

According to Insulate Britain, 52 people that have been involved in previous protests were taking part in Monday’s action in breach of the court ruling obtained by the government to allow transport authorities to press charges against them.

On Friday, the government won another interim injunction to prevent protesters from occupying the A20 and strategic roads linked to the Port of Dover, in southeast England, after the environmental group blocked access to the ferry terminal for several hours.

Insulate Britain, which wants the government to insulate and retrofit homes across the UK to cut climate emissions, has claimed that 8,500 deaths in an average UK winter are as a result of cold homes, and that thousands of families “have to choose between heating and eating.”