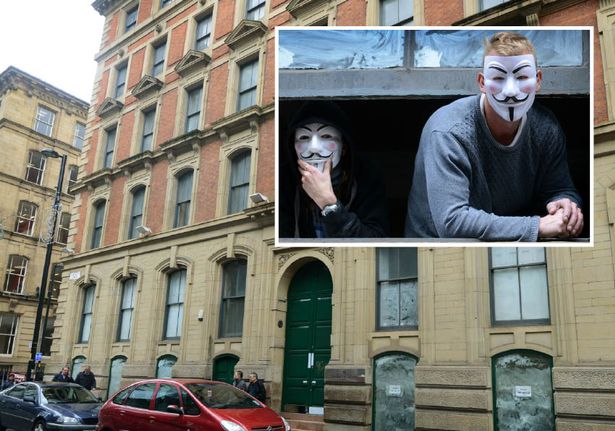 Homeless activists have promised to set up a ‘community hub’ for rough sleepers after occupying an empty building in Manchester city centre.

The homeless rights campaigners have vowed to remain in the vacant office block on Charlotte Street for ‘months’ after taking it over last night.

They say they are occupying the building to set up a hub where homeless people can go to get food, shelter and help to find accommodation and work.

Claiming the legal right to occupy the building under squatter’s rights, they say they have been forced to act as the council are not doing enough for the city’s homeless.

They also claim that members of the fire service have been to the building to assess that it is safe for them to stay in.

Wesley Hall, one of the activists who was also behind the Piccadilly Gardens recent protest rave, told the M.E.N. today: “We got in last night but there’s been squatters here for some time.

“At the moment we’re clearing and cleaning the building to get it ready to act as a hub for Manchester’s homeless. We will be providing them with somewhere where they can get food, a safe place to sleep and hopefully we can work to find people long-term accommodation and jobs.

“As a non-residential property we have the legal right to squat here and we have served papers to the police and council telling them that.

“No one is going to damage the building and we’re not doing any building work, playing loud music. We will not tolerate any drugs or criminal behaviour.

“Obviously this is not a long-term solution but we will be here for at least a month or two.”

Wesley also says that the council have failed to deliver a strategy to help homeless people that it said it would have completed by October.

It says many activists aren’t themselves homeless – and are making it more difficult for the council to deal with homelessness.

A Manchester City Council spokesman said: “We are aware that a small group of protesters have occupied a private building in the city centre. We have been in contact with the building’s owners and with the fire service, who are ensuring that people inside the building do not pose a risk to themselves or to any neighbouring buildings.

A GMP spokesman said they were aware of the occupation and were monitoring the situation.