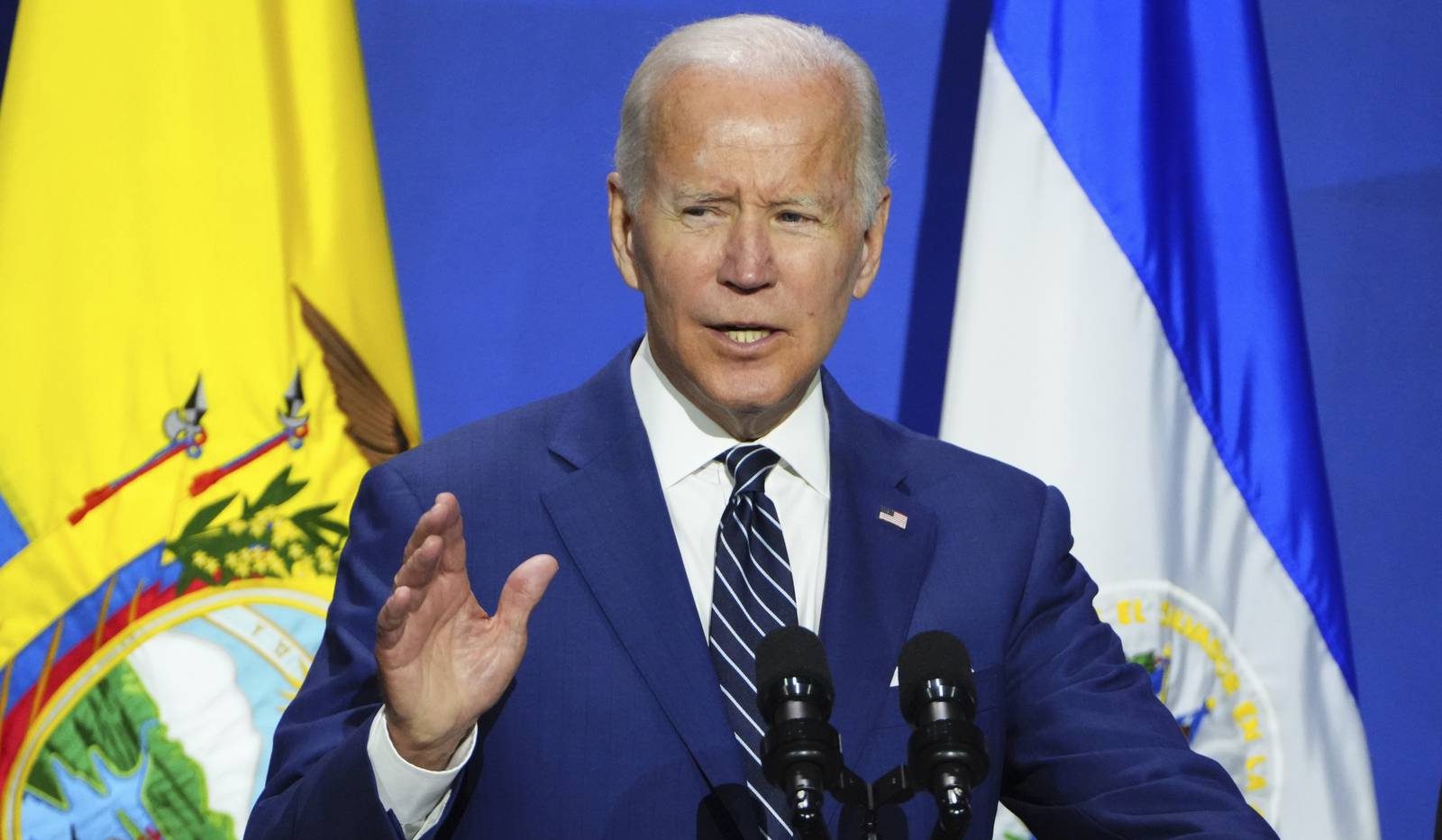 Ukraine Bits: No Ammo, More Casualties, And Passing The Buck

Above photo: Ukrainian President Volodymyr Zelensky “didn’t want to hear it” when US intelligence gathered information that Russia was preparing to invade, President Joe Biden has said. Sean Kilpatrick/The Canadian Press via AP.

The real state of the war in Ukraine, which I had described some two months ago, has now reached the main stream media. The Zelensky regime in Ukraine is using it to beg the ‘west’ for more guns and ammunition.

From the last link:

[T]he odds against the Ukrainians are starting to look overwhelming, said Danylyuk, the government adviser.“The Russians are using long-range artillery against us, often without any response, because we don’t have the means,” he said. “They can attack from dozens of kilometers away and we can’t fire back. We know all the coordinates for all their important targets, but we don’t have the means to attack.”

Ukraine has now almost completely run out of ammunition for the Soviet-era weapons systems that were the mainstay of its arsenal, and the Eastern European countries that maintained the same systems have run out of surplus supplies to donate, Danylyuk said. Ukraine urgently needs to shift to longer-range and more sophisticated Western systems, but those have only recently been committed, and in insufficient quantities to match Russia’s immense firepower, he said.

Russia is firing as many as 50,000 artillery rounds a day into Ukrainian positions, and the Ukrainians can only hit back with around 5,000 to 6,000 rounds a day, he said. The United States has committed to deliver 220,000 rounds of ammunition — enough to match Russian firepower for around four days.

The Independent claims to have seen an intelligence report that showed even worse numbers:

Ukrainian troops are suffering massive losses as they are outgunned 20 to one in artillery and 40 to one in ammunition by Russian forces, according to new intelligence painting a bleak picture of the conflict on the frontline.

A report by Ukrainian and Western intelligence officials also reveals that the Ukrainians are facing huge difficulties responding to Russians shelling with their artillery restricted to a range of 25 kilometres, while the enemy can strike from 12 times that distance.

For the first time since the war began, there is now concern over desertion. The report, seen by The Independent, says the worsening situation in the Donbas, with up to a hundred soldiers being killed a day, is having “a seriously demoralising effect on Ukrainian forces as well as a very real material effect; cases of desertion are growing every week”.

This was easily foreseeable. As I wrote in mid April:

Without fuel the Ukrainian army can not move and without constant supply, especially of large amounts of artillery munitions, it can not counter Russian artillery which will be in heavy use against it.

This pictures of a former Ukrainian position show the devastating result of such a situation. 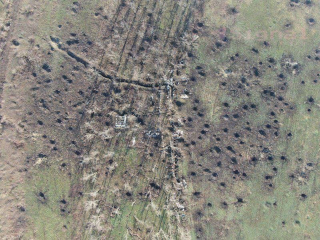 Nearly all of the Ukrainian ammunition and fuel supplies have been bombed and destroyed. What is trickling in through its western borders has difficulties to reach the eastern front and is anyway not enough to supply an actively fighting and maneuvering army.

To match Russia’s 50,000 rounds per day, with each round weighing 50 kilograms, some 2,500 metric tons of ammunition would have to be moved per day from Ukraine’s western border to the east. After reaching some railhead in the east they would have to be loaded on some 350 trucks to be distributed while being under fire from long ranging Russian weapons. This would have to happen each and every day.

The U.S. has large depots of ammunition but even those would be emptied within a few month if no large scale production of new rounds would be happening. Munition production is usually done only on a small but steady scale of a few hundred rounds per week. The west would have to scale up production to allow for the supply Ukraine would need to match Russia.

According to the Russian Ministry of Defense Ukraine’s artillery has lost 506 multiple launch rocket systems and 1,859 field artillery and mortars since the beginning of the war. The daily reported number of pieces hit have changed over time from 50+ per day to now single digits.

The total numbers in the Russia report are too high (as they usually are in similar ‘western’ reports). They amount to more than what the Ukraine had at the start of the war. But we can safely guess that more than 90% of Ukraine’s guns and missile systems have been destroyed. Meanwhile the ‘west’ has promised the Ukraine some 200 gun and some 50 missile systems. Half of those are former soviet types. The other half are newer and need ‘western’ ammunition. They seem to arrive only in trickles.

The U.S. has sent some 100 M-777 lightweight howitzers. Only a few have been seen at the front in the east and some were already destroyed there. Others are used to fire on non-military targets in Donetsk city. We can guess where the rest is. The M-777 is lightweight (4.2 metric tons) because it is largely made from titanium which has a ten times higher scrap value than steel. Some entrepreneurs in Ukraine’s west seem to have found that recycling the guns (or selling them elsewhere) is of more value than sending them to the east where they would surely be destroyed within a few days.

Ten days ago the Ukrainian comedian and president Zelensky had admitted that some 60 to 100 Ukrainian soldiers are getting killed per day. That number was highly qualified and an advisor to Zelensky has now doubled it:

A senior Ukrainian presidential aide has told the BBC that between 100 and 200 Ukrainian troops are being killed on the front line every day.

The real numbers are certainly higher than anything the Zelensky regime will ever admit. In a World War I like artillery dominated conflict (but without gas attacks) the number of wounded to dead is historically some 4 to 1 with one of the wounded additionally dying later from his wounds. This historic ‘sanitation deaths’ rate of wounded later dying from their wounds has since been halved by the use of antibiotics. But in Ukraine it may well be higher than usual in modern wars as its medical infrastructure is in a quite bad shape and as many medical personnel have fled the country.

So lets assume that the real numbers are some 300 dead per day plus 1,200 wounded. An eighth of the wounded, 150 men, will later die from their wounds. This casualty rate has been the same each and every day since early April when Zelensky rejected further negotiations and the war entered its attrition phase. It means that over the last two months the Ukrainian army lost more than 18,000 men with an additional 70,000 wounded. Some of whom will also have died by now while others will have fully recovered. The Ukrainian army started out with some 200,000 soldiers. Later some 30 to 100,000 men of the territorial defense forces were called up and send to the frontline. There were reports that some of these untrained units have had casualty rates of 65%.

No army can use all of its men on the front line. There are always a lot of logistic and support troop needed.

The tooth to tail ratio (T3R) in a military can be between 1 to 10 up to 1 to 2.5. The Ukrainian frontline will probably be held by some 20% of the Ukrainian army (200,000 minus dead and wounded plus territorial forces and a 1 to 4 T3R). That makes some 40,000 men over a current frontline length of some 1,000 kilometer. Those are 40 men per kilometer or 64 per mile. That is a quite thin force. It will not take many more weeks until that line breaks decisively.

Zelensky could shorten the contact line by half and double its defense power if he were willing to allow a retreat to the Dnieper line. But he has so far rejected any request for retreat. That seals the fate of his army.

I have written earlier about the effects of artillery fire on the morale of an army:

Morale can not replace firepower. Morale gets destroyed when soldiers come under concentrated artillery fire. Russia has plenty of the later.

The Independent report quoted above speaks of ever growing desertion numbers. They are still only a trickle but will become a flood as soon as the frontline breaks down. I now expect that to happen at the end of this month.

While the soldiers die by the hundreds per day Ukrainian officials continue with their propaganda gimmicks (machine translation):

Ukrainians on social media were outraged by an event organized by the Kyiv School of Economics and its president Tymofiy Milovanov in the United States.Participants are invited to “immerse” themselves in the atmosphere of war, in particular, to visit the filtration area and dinner in the style of a bomb shelter.

Milovanov himself announced the event, which will take place on June 25 in New York at the Harvard Club.

“This event will change you. Your priorities in life will change. You will understand and accept the responsibility of the whole world as your own, to win this war and stop Russia.

There will be a filtration zone, a bomb-style dinner, and an immersion in the experience of war and war crimes,” he said.

A ‘filtration zone’ is where prisoners of war will be interviewed and sorted before they are moved to prison camps. The Ukraine army has used such zones to torture prisoners.

Two days ago I noted that the blame game for the loss of the war has begun. Zelensky will be the one to whom the buck will be passed to. President Biden has now joined in this:

President Joe Biden, speaking to donors at a Democratic fundraiser here, said Ukrainian President Volodymyr Zelenskyy “didn’t want to hear it” when U.S. intelligence gathered information that Russia was preparing to invade.The remarks came as Biden was talking about his work to rally and solidify support for Ukraine as the war continues into its fourth month.

“Nothing like this has happened since World War II. I know a lot of people thought I was maybe exaggerating. But I knew we had data to sustain he” — meaning Russian President Vladimir Putin — “was going to go in, off the border.”

“There was no doubt,” Biden said. “And Zelenskyy didn’t want to hear it.”

Although Zelenskyy has inspired people with his leadership during the war, his preparation for the invasion — or lack thereof — has remained a controversial issue.

“Zelensky did not listen to us and he didn’t inform us how bad the war was going,” will become the standard line as soon as the Ukrainian army is on the run.