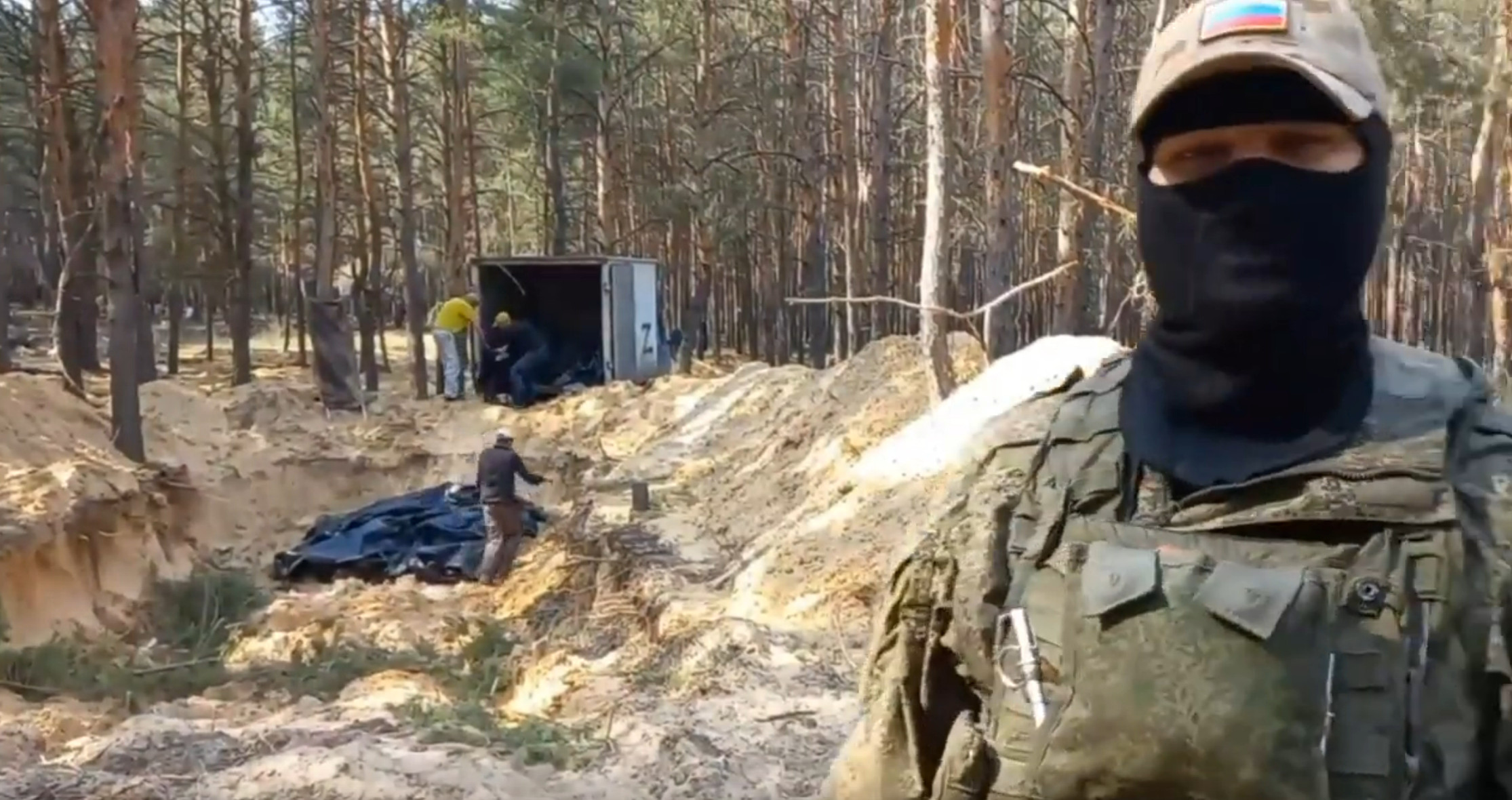 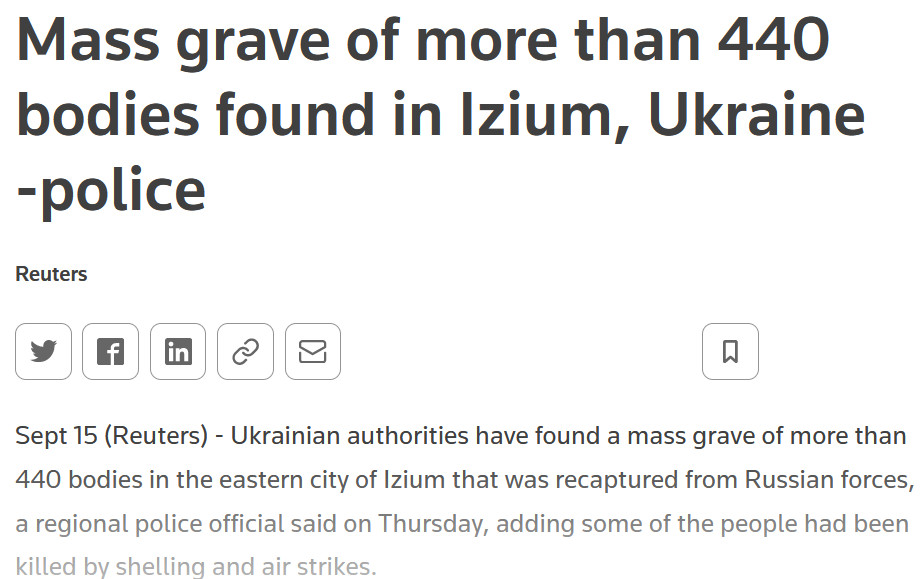 Many media, who republish the Reuters feed, repeated that headline:

Kyiv: Ukrainian authorities have found a mass grave of more than 440 bodies in the eastern city of Izium that was recaptured from Russian forces, a regional police official said on Thursday, adding some of the people had been killed by shelling and air strikes.Serhiy Bolvinov, the chief police investigator for Kharkiv region, told Sky News that forensic investigations would be carried out on every body.

“I can say it is one of the largest burial sites in a big town in liberated (areas)… 440 bodies were buried in one place,” Bolvinov said.

Notice the wording. It is a ‘large burial site’ with ‘440 bodies in one place’. That does not have to mean a mass grave with 440 bodies but could also describe a graveyard with a total of 440 people buried there.

And indeed an AP video team visited the site and their video shows quite a different scenario (h/t Tore). In a wooded area there are a large numbers, maybe one hundred or two, of single graves with orthodox and other crosses. There is also one grave that has a cross which says that 17 soldiers were buried there. 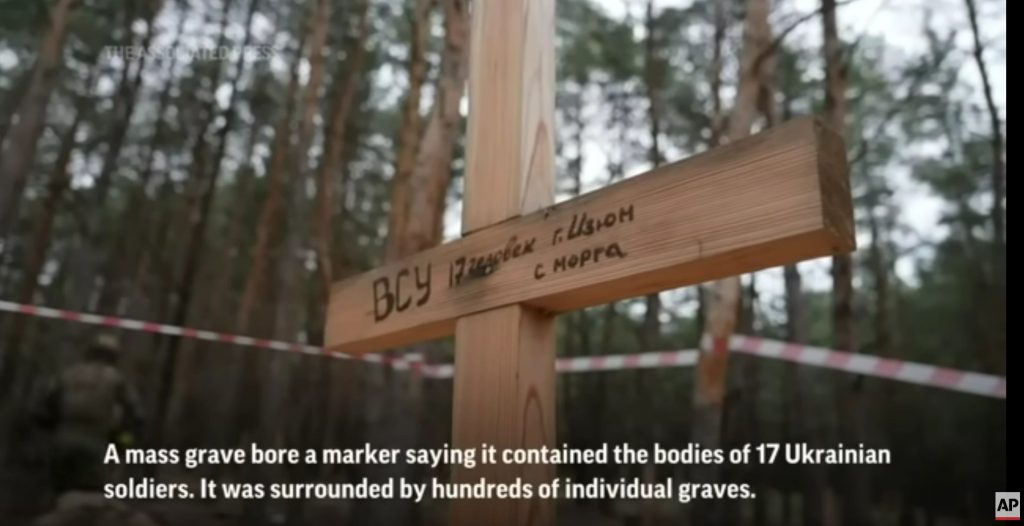 The video he refers to is likely this one (h/t Elena Evdokimova) which was published on May 8. It seems to show the same graveyard with that one mass grave. One sees civilians with red cross armlets collecting and burying bodies of dead soldiers. I count a total of 17 dead bodies but there may be one or two more. One Russia soldier is around and explains what is happening. The title in Russian translates to:

Ukraine refuses to take away the bodies of dead soldiers. Russian military bury them in mass graves 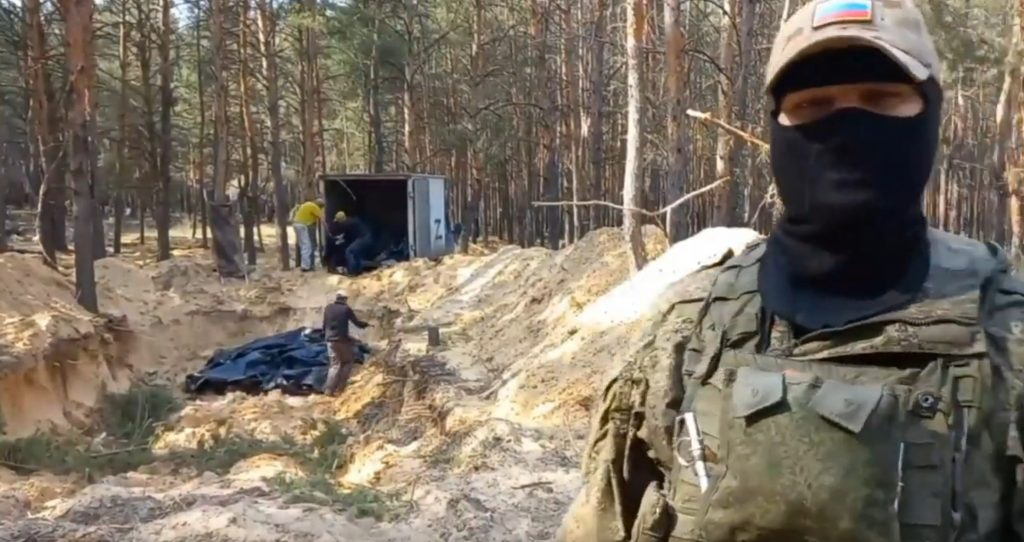 There is also a link to a Russian news site called Giport or Hyport which says (machine translated):

Ukraine refuses to take the bodies of the dead soldiers of the Armed Forces of Ukraine, and the Russian military is forced to bury them in mass graves

Ukraine again refuses to take away the bodies of its dead soldiers, who have to be buried in mass graves. The Russian side several times offered the enemy to take the bodies for burial by organizing a corridor for medical workers, but did not receive a response from the Ukrainian command.Some time ago, the bodies of dead soldiers of the Armed Forces of Ukraine were collected by Russian soldiers on their own and transported to the morgue under mortar shelling from Ukraine. As a result, Ukraine did not take them from the morgue either. Today, Russian servicemen had to bury the dead soldiers in mass graves.

According to one of the soldiers involved in the burial, the bodies of the killed soldiers of the Armed Forces of Ukraine were taken from the front line a week ago. He said that negotiations with the current government of Ukraine were unsuccessful. The Ukrainian side simply refused to take the bodies, so the Russian Armed Forces buried the dead on their own in one of the city cemeteries.

If the current Ukrainian authorities took the bodies of their fighters, their relatives could say goodbye to them in a human way. And now they were buried in plastic bags in mass graves. But this is better than becoming food for the beast, as it would happen if it were not for the Russian military. At least the relatives will at least have a chance to find the dead by going through the procedure of taking DNA.

This is not the first such story. Back in March, we wrote that Ukraine refuses to make contact and take the bodies of dead servicemen from the territories of the LPR and DPR. As a result, all of them were also buried in mass graves. Some had nameplates, other soldiers remained unidentified.

The Reuters headline was 100% false. That may have been because the editor misinterpreted what the Ukrainian police investigator said. Or it intentionally exaggerated the case to increase the propaganda value of that news item. I suspect the latter to be the case.

There is otherwise nothing unusual with that graveyard. During a war people on both sides die. Civilians suffer as much as soldiers while fighting around them is going on. The city had been heavily defended by the Ukrainians and it took the Russian military the whole of March to take it. A lot of the buried casualties were likely killed by artillery fire. There is no way to tell from which side that fire had came.

That the graveyard is in the woods and not in some open place also makes sense. With camera drones around and being in reach of hostile artillery one would not want to be caught while shuffling graves in open fields. The trees give at least some protection from being seen from above.

The letters left behind by demoralized Russian soldiers as they fled

The 10 handwritten letters, dated Aug. 30, were left behind in a two-story residential house where Russians were squatting and later found by Ukrainian soldiers who provided the letters to The Washington Post for review. They paint a portrait of dejected troops desperate for rest and concerned about their health and morale after months of fighting.
…
The similar style in which the 10 letters were written suggests the troops, weary and disheartened, banded together to draft them. The letters caught the attention of Ukrainian soldiers when they first arrived in Izyum, which the Russians abandoned hastily in retreat, and some were shared on social media.The authenticity of the letters has not been confirmed by independent forensic experts …

One can tell right away that the story makes little sense. The Russian security forces that were in Izium after the initial fighting were from the Rosguardia (Rosgvardiya), the National Guard of Russia which is more like a border police force with some additional tasks. There was little fighting in Izium after the end of March. The guards station there were regularly supplied. In that context they had no reason to feel like “dejected troops desperate for rest and concerned about their health and morale”.

The Rosguardia were evacuated without losses by Russian military forces before the Ukrainians surrounded and recaptured the city.

That the ten letters were written in ‘similar style’ makes it likely that they were written by the same team of Ukrainian intelligence that uses the Washington Post and other media to spread their lies to the public. They intend to portray the Russian military as an exhausted and morally broken force. Neither seems to be the case.

While I wrote the above Reuters published a new piece that changes its earlier reporting but does not correct it:

Around 200 wooden crosses seen at site near Ukraine’s Izium

It in fact repeats the earlier false claims that the AP report had debunked:

IZIUM, Ukraine (Reuters) – Around 200 wooden crosses were found on Friday at a site near Izium in northeastern Ukraine, Reuters witnesses said, possibly marking a second mass grave in an area recaptured in recent days by Ukrainian forces.Men in white overalls have begun exhuming bodies at the site, located on the edge of a cemetry in the northwest of Izium, the witnesses said. Some 20 white body bags were visible.

Ukrainian authorities earlier reported the discovery of a mass grave containing around 440 bodies in the city of Izium, a frontline Russian stronghold until Ukraine’s counter-offensive across the Kharkiv region during the past week.

It is not the ‘fog of war’ that clouds such new reporting. It is the propaganda that was ordered up to incite the ‘western’ population against Russia and its citizens and soldiers.

Without further backup and can not, and should not, believe any news item coming from the Ukraine and other wars.