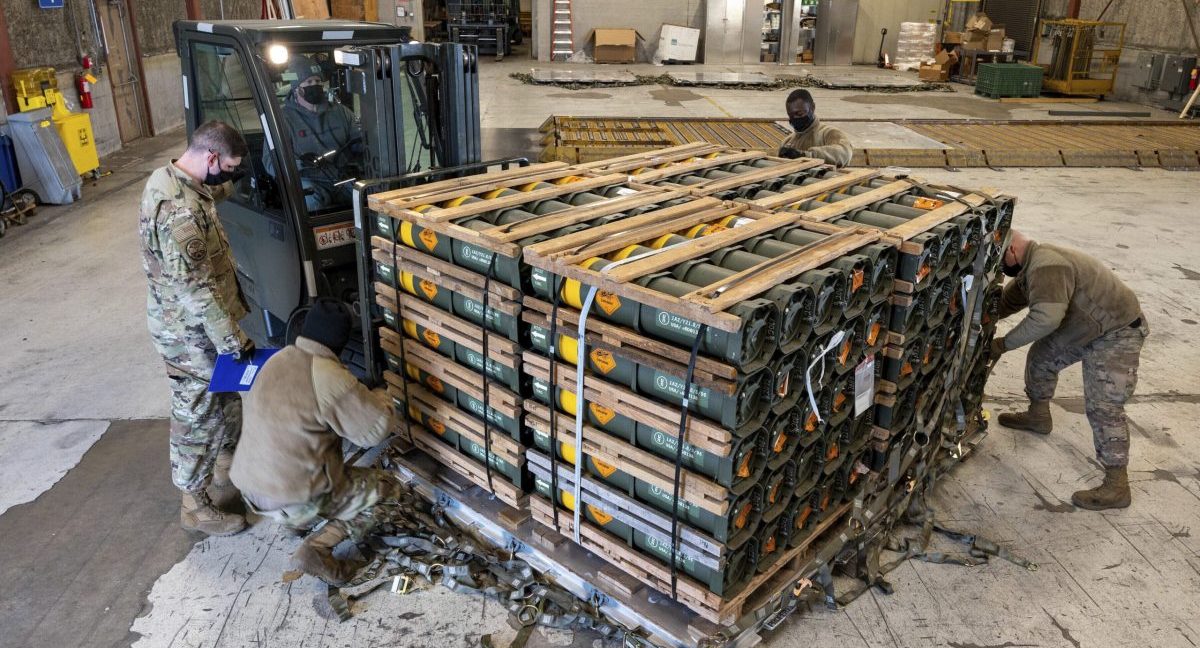 Above photo: Airmen and civilians from the 436th Aerial Port Squadron palletize ammunition, weapons and other equipment bound for Ukraine during a foreign military sales mission at Dover Air Force Base, Del., on Jan. 21, 2022. Mauricio Campino/U.S. Air Force via AP.

The Russian side is making some progress in the war in Ukraine.

While the differences on the map look small the repositioning of forces that had threatened Kiev is finished and the Russian military is now seriously degrading and grinding down the Ukrainian forces in Donbas.

According to the daily reports of Russia’s Ministry of Defense the Ukraine is losing several hundred soldiers and some 30 armored vehicles per day, most of them to artillery. A flood of gruel pictures posted on Telegram by both sides confirm this. Several Ukrainian attempts to counterattack Russian forces have failed.

‘Western’ propagandists are noting that their side is losing.

Anders Åslund @anders_aslund 14:02 UTC · Apr 28, 2022
The War: Ukraine has experienced setback in the past few days. A senior Ukrainian official announced yesterday that Russian troops had taken part of the Kharkiv region. Yesterday, Russia announced that it has captured the entire Kherson region. No Ukrainian advances.
Not good.

The typical U.S. reaction to losing is to double down.

This can be done financially:

Most of above sums will go the U.S. arms industry to deliver weapons for which the Ukraine has little use or which never will reach the frontline. The rest will be pilfered by Ukrainian oligarchs.

That financial doubling down will not be very effective.

There is also the possibility of doubling down by widening the war. This could be in Bosnia where attacks on the Serbian population could drag the Russian ally Serbia into another war. An additional war could also be created in Transnistria (marked as a lengthy strip on the left of the above maps). This could involve not only forces from the Ukraine but also from Moldova, Romania and Poland. In the early 1990s a small war between Moldova and the Russian population in Transnistria ended in 1992 with a ceasefire and Russian peacekeeper troops on the ground.

In a piece about Biden’s new pledge of money to Ukraine the NYT notes:

The Ukrainian military said it was moving more troops to the border with Transnistria, a small breakaway region in Moldova, on Ukraine’s southwest flank, hundreds of miles from the fighting on the eastern front.

Should those troops do something Russia does not like it will likely use its air and missile capabilities to destroy their fighting power. President Putin certainly did not mean Transnistria when he recently spoke to Russian lawmakers and threatened retaliation:

Let me emphasise once again: if anyone intends to intervene from the outside and create a strategic threat to Russia that is unacceptable to us, they should know that our retaliatory strikes will be lightning-fast. We have the tools we need for this, the likes of which no one else can claim at this point. We will not just brag; we will use them if necessary. And I want everyone to know this; we have made all the decisions on this matter.

That threat was likely a response to rumors that the U.S. and UK are planning to deliver longer range missiles to Ukraine to be use against targets on Russian grounds. That would be another form of doubling down but also a way more dangerous one.

Ukraine is a victim here but not a victim of Russia but of much bigger plans in the U.S. which did its best to instigate this war (recommended).

As Michael Hudson explains (vid), the economic consequences of this war will be catastrophic for many countries and people. But the neocons who are running the war do not care about those. They have a plan to profit from it. They want to stay the unipolar power of the globe. To them it is a game and their main motives include an ingrained hatred towards Russia.