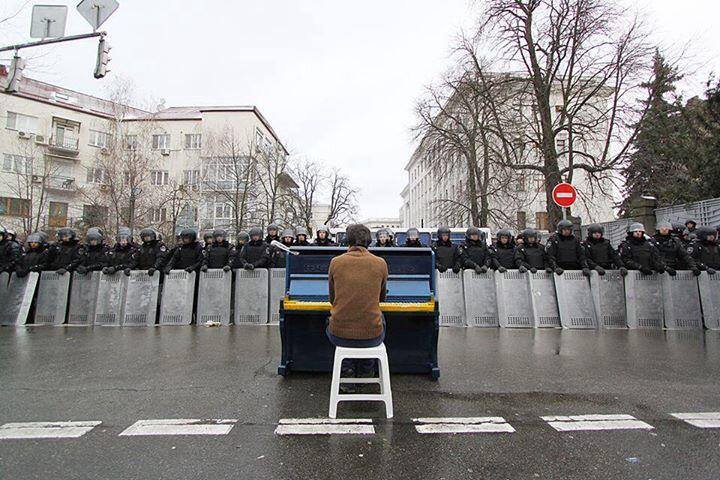 Ukraine: From EU Deal To Revolution, The First Three Days.

Events in Kyiv are evolving VERY quickly. Last week, mass protests in Ukraine represented an attempt to pressure President Yanukovych to sign the Association Agreement with the EU. After Saturday’s early morning attack by riot police on protestors camped in Independence Square, a paradigm shift occurred: this is not about Europe anymore. People on Ukraine’s streets are no longer calling for EU integration – or if they are, this is now a peripheral demand. Ukrainians now simply want a change of government. The word “revolution” – chanted by demonstrators – seems to sound increasingly believable.

I note this because Ukrainians living abroad are gathering today (Sunday December 1) in many world capitals to demonstrate their support for Ukraine’s eurointegration. I suspect many EU leaders also believe this issue is still salient to Ukraine – indeed this was the message from two Polish speakers (including former PM Yaroslav Kachinsky) on Independence Square today. However, to the people on the streets of Kyiv, European integration is an issue that a NEW government will have to turn to – eventually. Right now, they (we) are demonstrating because they have lost all faith in their current government – a government that dared to savagely beat defenseless students in the dead of night. If international protests are to be relevant to Ukraine’s realities, they need to be synchronized with the mood in Kyiv (and Lviv and other cities), and here the demand is simple: President Yanukovych must go!

Today, a very large scale demonstration took place in the center of Kyiv (participant estimates range from 350 thousand to 1 million people). Many thousands travelled to the capital from Ukraine’s regions; many former government and army officials have joined the protest movement. As my wife and I walked to the demonstration this morning it was very clear that Kyiv residents were not going about their normal weekend business – the streets were practically empty because most Kyiv residents had joined the protests in the city center. The last time the Ukrainian capital hosted this many demonstrators was 2004, and before that in 1991.

But one peaceful demonstration, no matter how large, will not be enough to topple the Yanukovych regime, and it would seem that many realize this fact. Immediately after today’s peaceful demonstration on Independence Square began to disperse, a group of violent radicals attempted to raid the Presidential Administration building on Bankova St. where a street fight erupted with riot police. According to opposition leaders, the radicals’ attack was instigated by operatives (“provokatory”) from the regime itself in an attempt to generate a pretext for a proclamation of martial law in Ukraine’s capital. That theory may have merit, but the fact that a street fight with police occurred at all indicates that opposition leaders do not fully control the situation in the areas around Kyiv’s administrative buildings. If one were to describe the situation in a single word, it would be “chaotic”: mobile phone service in the city center is sporadic; no clear chain of command seems to exist yet between the newly formed command center on Independence Square and the various pockets of protesters around the city center; people are angry and radicalized, and are eager to act, but without clear instructions as to what to do….MORE HERE

Video of clashes between Riot Police and Protesters earlier in #Kyiv #Ukraine when tear gas and stun grenades used against crowds of people in streets:

I realize that some may find my reference to Ukraine’s current President as a thug to be tendentious (to say the least), but it’s time for the world to understand who in fact we are dealing with. The word “thug” seems to be the most accurate description of Yanukovych. His actions are not strategic; he is not a person of compromise; he is exceptionally dangerous if backed into a corner; he understands strength, force and money; he plays diplomatic games, but in fact is authoritarian and demands absolute loyalty from those around him; although publicly religious, he feels no remorse (or personal responsibility) for the pain and suffering inflicted on defenseless students and journalists during the past weekend by the riot police squads for whom he is commander-in-chief.

Tonight, 24 hours after almost half a million people gathered on the streets of Kyiv to protest against police brutality against students camped out in a peaceful protest on Independence Square, and 18 hours after those protests turned violent and bloody when riot police not only dispersed crowds, but also hunted down defenseless journalists, and beat them senseless, President Yanukovych finally broadcast a televised interview to the nation.  Incidentally, because of the current upheavals in the center of Kyiv, the interview was held in the President’s residence in Mezhyhiriya (approx. 40 km from Kyiv).

So what did he say?

With respect to the EU-Ukraine Association Agreement, Yanukovych presented a detailed account of events that led him to refuse to sign the deal, and repeated his argument that Ukraine’s economy is not yet ready to be integrated into a common European market without a massive infusion of funding. The President also stated explicitly that in parallel with ongoing negotiations with Brussels, he has ordered a renewal of negotiations on a “strategic partnership agreement” with Moscow which should result in a significant decrease in gas prices. In fact the question of gas prices, trade relations, and other economic issues took up more than 3/4 of the time allotted to the interview (46 minutes total). Yanukovych does not seem to understand that demonstrators on the streets of Kyiv and other cities are completely uninterested in these issues. For them, eurointegration is a question of values, not of money.

When asked about the current situation on the streets of Kyiv (mass protests, police brutality, barricades on Independence Square), the President stated: “In even the most democratic countries, laws are written to defend those who are called upon to enforce them.” He continued by calling for a full investigation of recent events by the Prosecutor’s office, and condemned those protestors who have occupied Kyiv city hall, “using children as a shield”. Although he condemned “provokers” of violence, he did not announce the firing or even suspension of those ministers who are suspected of having ordered the brutal riot police attacks on unarmed citizens. On the other hand, he did not even come close to alluding to a future suspension of civil liberties or a proclamation of a state of emergency – as many had expected of him.

In a nutshell, with respect to the current political situation, Yanukovych’s message was that everything is basically OK in Ukraine. The country is experiencing some economic and political turmoil (and investigations of perpetrators on both sides should follow due judicial process), but in reality, there is nothing really to be alarmed about.

This is a message that sounds strange when compared to Yanukovych’s address to the nation – published on Saturday evening on his website, 24-hours prior to the clashes on the street in front of the Presidential Administration. In that address the President expressed regret over the riot police’s brutal attack on students on early Saturday morning, and though he did not announce firings, he was quite forceful in his demand that the Prosecutor General personally report to him as to who was responsible for ordering the attack. That address came as close to an apology that one could expect from a thug. Today, Yanukovych was back to his normal psychological state: never apologize because it makes you look weak….MORE HERE

Today, Ukraine’s opposition suffered a setback: the confidence motion that they had demanded, did not gain enough votes in Parliament to force the resignation of Prime Minister Azarov’s government. After a series of carefully planned and scripted statements by the leaders of Ukraine’s five parliamentary parties, and a lengthy and emotional speech by Azarov, the motion received only 186 of the required 226 votes.

At first it seemed that the motion would carry. News reports had claimed that Party of Regions deputies were defecting to the opposition in large numbers. Furthermore, Communist Party leader Petro Symonenko (the Party of Region’s coalition partner) began his speech with scathing criticism of the Azarov government, seemingly foreshadowing his faction’s support for the no confidence motion. But after 3 minutes, Symonenko suddenly turned his attention to the three opposition factions, stating outright that the wording of the bill that they had tabled which identified the government’s sudden about-face on EU integration as the reason for Parliament’s loss of confidence, was unacceptable to the Communists. Ukraine’s Communists have opposed the government’s pro-EU policy for years, and therefore could not accept the opposition’s formulation. Symonenko held up his own bill, signed by all 33 Communist Party Parliamentarians, which identified different reasons for firing Azarov, and asked the opposition to support his version. Batkivshchyna faction leader Arseniy Yatseniuk immediately stated that the opposition would support the Communists’ motion (swallowing its distaste).

However, speaker Rybak called a vote on the original motion which the Communists did not support. When that vote failed, Rybak congratulated Azarov, and explained to those watching the proceedings that the Communists’ bill had not been previously registered on the Parliamentary docket, and according to the Rada’s procedure, it could not be introduced for a vote without first being printed and distributed to all deputies. The “optics” of this situation seem to suit both sides: the Communists can now argue to their supporters that although they did not actually vote for the resignation of the unpopular Azarov government, they actually proposed their own solution to the stand-off, but were denied by circumstances. On the other hand, the opposition can now blame both the Communists and Party of Regions (both equally unpopular in opposition constituencies) for their failure, and claim that they tried all options to have Azarov fired. “Optics” secured, the opposition politely blocked the Parliamentary roster, and Speaker Rybak quickly closed the proceedings. Meanwhile, according to Ukraine’s Constitution, a confidence vote can only be called once in a Parliamentary session, so Azarov’s government has de facto gained immunity until February when the legislature will re-open for its spring session. According to procedure, the government may now be only fired by the President.

In any public event, and revolutions are no exception, the substance of what is said, or what occurs, is often less important than how it is presented and how it is viewed by one’s constituency. Campaign managers and press attaches call this “the optics” and “spin” – and these need to be managed very carefully given their influence on the public’s perception of an official or event.

On Independence Square the optics of a well-organized machine have certainly been secured, and are probably real. Temperatures have dropped well below freezing, but ample supplies of food, clothing and firewood have been stocked, and musicians regularly keep the protesters entertained and moving. A website has been set up for people wanting to donate to the cause of Euromaidan and for visitors seeking help: http://maidansupport.com Accommodation and transport for those coming from the regions has been secured, and an impressive logistical machine seems to be in place. The perimeter of the camp is well secured by barricades and several TV channels have set up mobile broadcasting centers…..MORE HERE