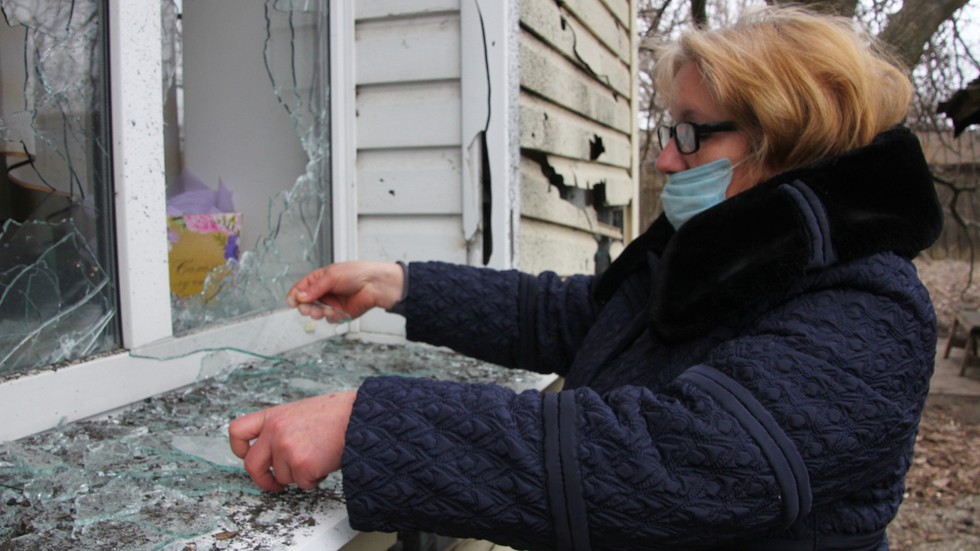 Ukraine Intensifies Shelling Of Donbass As Western Media Are Silent

While much of the world is focused on Covid-related issues, Ukraine’s seven-year war on the people of Donbass continues. In recent weeks, Kiev’s shelling of civilians has intensified, met by the predictable Western media silence.

Ostensibly, following the Minsk agreements, there was a ceasefire. In reality, Donbass residents in villages bordering peace lines are incessantly subject to Ukrainian shelling.

Ukraine uses heavy weapons in violation of the agreement, including 82mm and 120mm mortar shells, routinely shelling at night when Organization for Security and Cooperation in Europe (OSCE) observers are not patrolling the area.

But Ukrainian forces also shell during the day, and have done so a lot more of late, including allegedly with phosphorus, and shelling further behind the front lines.

Most people could be forgiven for not being aware of events in Ukraine’s breakaway Republics of Donetsk and Lugansk (DPR/LPR) in the Donbass region, with corporate media either not touching the matter or doing so with glasses tinted heavily by the Ukrainian government.

There are in fact journalists and news sites that regularly give updates, but they aren’t as widely known as they should be.

From my own September 2019 reporting from frontline villages of the DPR, I maintain contact with reporters and residents who update on the situation there.

One of these was the mayor of Gorlovka, a city northeast of Donetsk, who on his Telegram channel on February 19 detailed the nearby villages of Zaitsevo and Mine 6/7 being under heavy weapons fire (by Ukraine). On February 20, he wrote of Mine 6/7 and another village being heavily shelled since early morning, with locals saying more than one hundred hits occurred.

The same day, Alexey Karpushev, a resident of the northern city of Gorlovka, wrote, “From about five in the morning until now, there is heavy shelling of the city from the Air Force artillery.”

According to Karpushev – who is a former first secretary of Gorlovka’s committee of the Communist Party of Ukraine – in recent weeks, the number of attacks from the Ukrainian army “increased significantly.” He mentioned that a 22 year old civilian was recently seriously injured in the attacks.

I asked why the increased shelling now.

“Ukraine’s aggression intensified just when Biden came to power in the United States.” It is quite likely that President Volodymyr Zelensky feels more confident with the return of the  warmongers to the White House. Not long after Biden took power America resumed illegally bombing Syria.

In villages northwest and north of Gorlovka, passing many boarded up and destroyed homes (including one still smouldering from the shell-induced fire that gutted it), I met residents who stayed in spite of the nightly shelling and damage to their homes, because they had no other option.

One of these was a 74-year-old woman, whose home was falling apart after having been shelled on multiple occasions. “I’m afraid at night; that’s when they start shelling heavily. My husband is dead. I have nowhere to go.”

In another village I met a man who was about to walk down the lane that I had been cautioned to avoid due to the risk of being shot by Ukrainian snipers. His house was in a district largely unpopulated now because getting there meant being in the line of fire, but like others I met, he had nowhere else to go.

He consented to speak, but off camera, saying Ukraine had shelled his home directly after he did a video interview. He also said he had once been shot in the leg by a sniper and many other times had to drop to the ground when snipers started firing.

Last year I travelled to the Donetsk People's Republic, to interview civilians on frontlines and under fire from Ukrainian forces.https://t.co/52P2UP41tz

Another man in the area wasn’t worried about speaking on camera, although his house had also been damaged by Ukrainian attacks.

“Why do you support Nazis if you remember WW2? Why do you now support the Nazis? Openly Nazis… Why is Europe silent? Everyone comes here and agrees with me, but nothing changes. OSCE shouts, but when they are under fire, they are silent, they don’t say that Ukraine attacks them.”

In Zaitsevo, another frontline village, the head of administration, Irina Dikun, told me of the hell they had been living for the past six years, saying the ceasefires never reached her village.

“Here, we are not living, we’re surviving. Those who could leave, have left. Those who remain are mostly elderly.”

Ambulances couldn’t reach homes close to the front line where Ukraine was shelling, so she learned to drive and took First Aid training in order to help injured residents. In addition to detailing Ukraine’s destruction, “street by street,” of the village, she emphasized that what Western media claims about Russia invading the breakaway republics was false.

“There is no Russian invasion here. Just normal, peaceful people who wanted to live another way. In the beginning, we didn’t want to make a Republic; we just wanted to be autonomous. But we were not listened to. Ukraine moved its armed forces against the people and used their artillery against us.”

I also spoke with numerous DPR soldiers, asking them, among many things, why they had picked up weapons.

“Because of the killing of people in Odessa. That’s what made us join the military, to defend our area,” one soldier said.

Another man said he had initially joined protests against the coup in Kiev, that he “didn’t support the Nazi regime,” and eventually took up arms to defend the DPR.

In those frontline areas, 500 metres from Ukrainian forces, I wore body armour and a helmet. As I listened to various elderly people speak of the near-nightly shelling and heavy machine gun fire they were subject to, it struck me how these brave souls had nothing to protect them, no global body to prevent Ukraine from maiming and killing them, damaging or destroying their homes, year after year.

Meanwhile Ukraine has Western nations whitewashing its crimes and sending it weapons.

On February 11, Ukraine reported that President Zelensky and a gaggle of Western ambassadors visited a front line on the Ukraine-controlled side, with Zelensky waffling on about the importance of his cohorts in disinformation seeing “with their own eyes” what is happening in Donbass.

Yeah, no. They didn’t see anything beyond the sterile visit they were allotted. They certainly would not have heard the anguished accounts I did on the other side of that front line.

They wouldn’t know of the many people, many of whom are elderly, living in shells of homes, or the basement of a school, deprived of electricity, water, cooking gas, reliant on aid for their survival. Nor that Ukraine has reportedly blocked UN and Red Cross aid from entering the DPR, including recently.

On February 24 and 25, Ukrainian forces shelled Yelenovka, south of Donetsk, a point through which humanitarian aid from the UN and Red Cross was to enter, preventing the aid delivery.

Preventing the entrance of aid, on top of continually shelling civilian areas, is the furthest from Ukraine “fulfilling its obligations to establish a ceasefire regime,” as President Zelensky claimed to Western ambassadors.

While Russian officials warn of the dire fate of 4 million people under Ukrainian shelling, Western officials either remain silent or fabricate more accusations against Russia and against Donbass’ defenders.

#Polyanskiy: 4 million people in the East of Ukraine are living in very precarious conditions under Ukrainian shellings, and facing total ignorance during the negotiations in Minsk. Their existence is almost denied by #Ukraine which calls them occupants on their own lands. pic.twitter.com/KEi9QKAttE

Western media have predictably remained silent on Ukraine’s crimes, painting defenders of Donbass as “pro-Russian separatists” with no context as to what people in Donbass actually want. From what I heard there, all they want is autonomy from the criminal government in Ukraine, and above all an end to the war.

And while Western officials and media harp on about a supposed “Russian invasion” of the republics, even the chairman of the OSCE Special Monitoring Mission recently emphasized that was untrue.

An aside: one of the soldiers asked me about the reaction of people in the West to Ukraine’s brazen display of Nazi symbols. My reply was that, thanks to Western media, most people don’t know.

Recently, the head of the DPR warned, “We need to be ready for anything” from Ukraine. Indeed, with the pro-war Biden administration, we can surely expect more Western support to Ukraine in further bombing the people of Donbass.