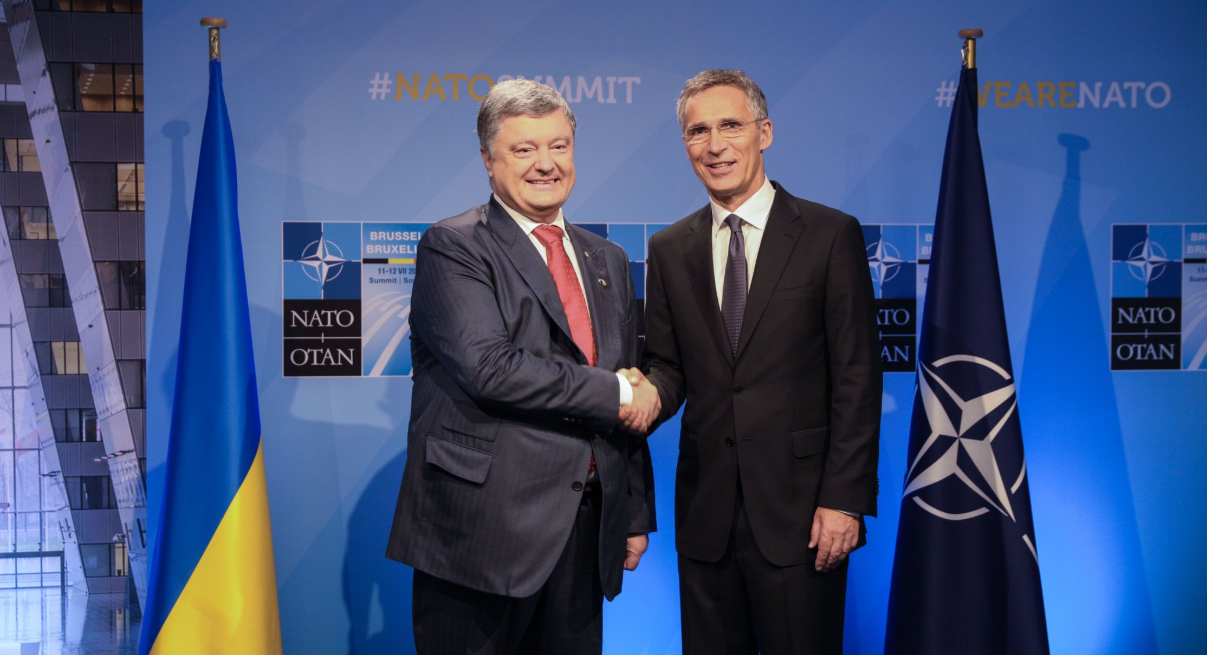 Ukraine: NATO In The Constitution

Above photo: From Twitter – Petro Poroshenko at NATO summit, July 2018.

The day after the signature of NATO’s membership protocol with North Macedonia as its 30th member, Ukraine did something without precedent: it included in its Constitution the engagement to enter officially into NATO and the European Union at the same time.

On 7 February, on a proposition by President Petro Poroshenko – the oligarch who made himself rich by plundering public properties, and who is once again a candidate for the presidency – the Kiev parliament, by 34 votes to 35 with 16 abstentions, approved these amendments to the Constitution.

The inclusion in the Ukrainian Constitution of the engagement to enter officially into NATO bears with it some very serious consequences.

On the interior, it alienates the future of Ukraine from this choice, by excluding any alternative, and outlaws de facto any party or person who might oppose the “strategic decisions of the state”. Already, the Central Electoral Commission has forbidden Petro Simonenko, director of the Ukrainian Communist Party, to participate in the Presidential elections to be held in March.

The merit for having introduced into the Ukrainian Constitution the engagement to enter officially into NATO goes in particular to Parliamentary President Andriy Parubiy. Co-founder in 1991 of the Ukrainian National-Socialist Party, on the model of Adolf Hitler’s National-Socialist Party; head of the neo-Nazi paramilitary formations which were used in 2014 during the putsch of Place Maïdan under US/NATO command, and in the massacre of Odessa; head of the Ukraine National Security and Defense Council, which, with the Azov Battalion and other neo-Nazi units, attacked Ukrainian civilians of Russian nationality in the Eastern part of the country and used his squadrons for acts of ferocious abuse, the plunder of political headquarters and other auto-da-fés in a truly Nazi style.

On the international level, we should keep in mind that Ukraine is already linked to NATO, of which it is a partner: for example, the Azov Battalion, whose Nazi character is represented by the emblem copied from that of the SS unit Das Reich, has been transformed into a special operations regiment, equipped with armoured vehicles and trained by US instructors from the 173rd Airborne Division, transferred to Ukraine from Vicence, and seconded by other NATO members.

Since Russia has been accused by NATO of having illegally annexed Crimea, and of launching military operations against Kiev, should Ukraine officially join NATO, the 30 other members of the Alliance, on the basis of article 5, would be obliged to “assist the party or parties under attack by adopting immediately, individually and in agreement with the other parties, any action that it should deem necessary, including the use of armed force”.

In other words, they would have to go to war with Russia.

These dangerous implications of the modification of the Ukrainian Constitution – behind which are most certainly strategies by the USA and NATO – have been met with political and media silence. Including that of the Italian parliament, which, in 2017 established an agreement with the Ukrainian parliament, supported by Laura Boldrini and Andriy Parubiy. Thus cooperation has been reinforced between the Italian Republic, born of resistance against fascism and Nazism, and a régime which has created in Ukraine a situation similar to that which brought about the arrival of fascism in the 1920’s and Nazism in the 1930’s.