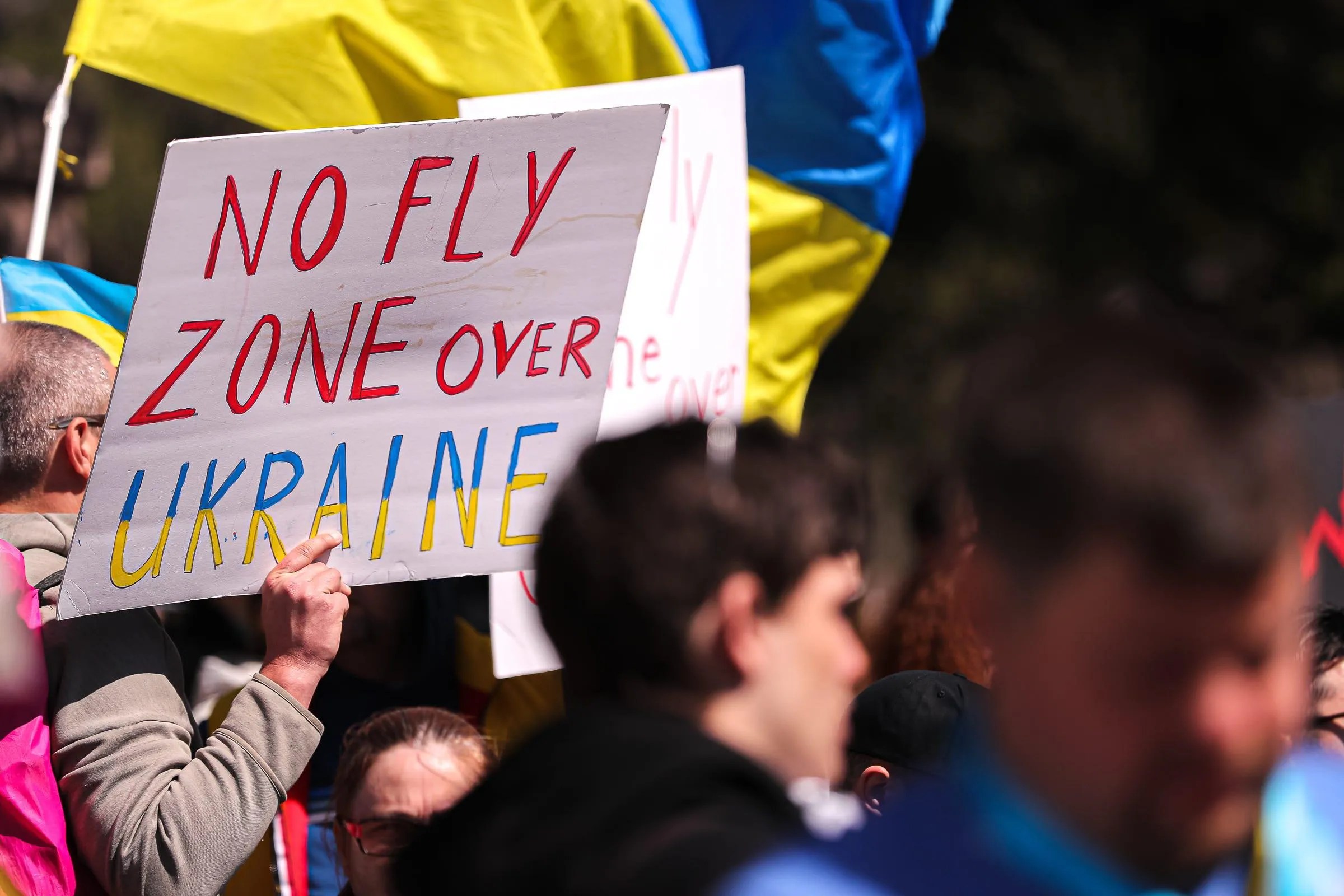 Ukraine No-Fly Zone ‘Could Lead To End Of Human Civilization’

Canadians calling for a no-fly zone over Ukraine have lost the plot.

Unless their real aim is nuclear war.

Recently, former Conservative cabinet minister Chris Alexander, New Brunswick education minister Dominic Cardy and former Chief of the Defense Staff Rick Hillier have raised the idea of creating a “no-fly zone” (NFZ) over Ukraine. “We’re calling on all governments of the world to support creating a no fly zone over Ukraine”, declared Michael Shwec, president of the Ukrainian Canadian Congress, at a rally in Montréal. Ukrainian President Volodymyr Zelensky and US Congressman Adam Kinzinger have also called for NATO to adopt a NFZ.

A NFZ over Ukraine means war with Russia. It would force the US or NATO to shoot down Russian planes.

A war between Russia and NATO would be horrendous. Both the US and Russia have thousands of nuclear weapons. Highlighting the dangers, Paul Street wrote on Counterpunch that “any elected official calling for a No-Fly Zone over Ukraine should be forced to rescind that call or resign for advocating a policy that could lead to the end of human civilization.”

Fortunately, Canada’s defense minister Anita Anand and White House Press Secretary Jen Psaki have rejected the idea of an NFZ. “It would essentially mean the US military would be shooting down planes, Russian planes,” said Psaki. “That is definitely escalatory, that would potentially put us in a place where we are in a military conflict with Russia. That is not something the president wants to do.”

Even when the target is not a nuclear power, Canadian-backed NFZs have created death, destruction and escalation.

After killing thousands of Iraqis in 1991 the US, UK, France and Canada imposed a NFZ over Northern and Southern Iraq. Over the next 12 years US and British warplanes regularly bombed Iraqi military and civilian installations to enforce the NFZs.

On different occasions Canada sent naval vessels and air-to-air refueling aircraft to assist US airstrikes. Canadian air crew on exchange with their US counterparts also helped patrol the NFZs.

After a September 1996 US strike to further destroy Iraq’s “air-defense network” Prime Minister Jean Chretien said the action was “necessary to avert a larger human tragedy in northern Iraq.” Five years later Chretien responded to another bombing by stating, “if the Iraqis are breaking the agreement or what is the zone of no-flying, and they don’t respect that, the Americans and the British have the duty to make sure it is respected.”

12-years after enforcing the NFZs the US/UK launched a full-scale invasion of Iraq. Hundreds of thousands were killed.

In March 2011 Washington, Paris and some other NATO countries convinced the United Nations Security Council to endorse a plan to implement a NFZ over Libya (China, Germany, Russia, Brazil and Turkey abstained on the vote).Begun under the pretext of saving civilians from Muammar Gaddafi’s terror, the real aim was regime change. The UN “no-fly zone” immediately became a license to bomb Libyan tanks, government installations and other targets in coordination with rebel attacks. With a Canadian general leading the mission, NATO also bombed Gaddafi’s compound and the houses of people close to him. The military alliance defined “effective protection” of civilians as per the UN resolution, noted Professor of North African and Middle Eastern history Hugh Roberts, as “requiring the elimination of the threat, which was Gaddafi himself for as long as he was in power (subsequently revised to ‘for as long as he is in Libya’ before finally becoming ‘for as long as he is alive’).” Thousands, probably tens of thousands, died directly or indirectly from that conflict. Libya has yet to recover and the conflict spilled south into the Sahel region of Africa.

While they may sound benign, NFZs have generally elicited violence. Russia’s invasion of Ukraine is a terrible violation of international law that is likely to have deleterious consequences for years to come. But, escalating the conflict through a no-fly zone will only make it worse. It could lead to a cataclysmic nuclear war.