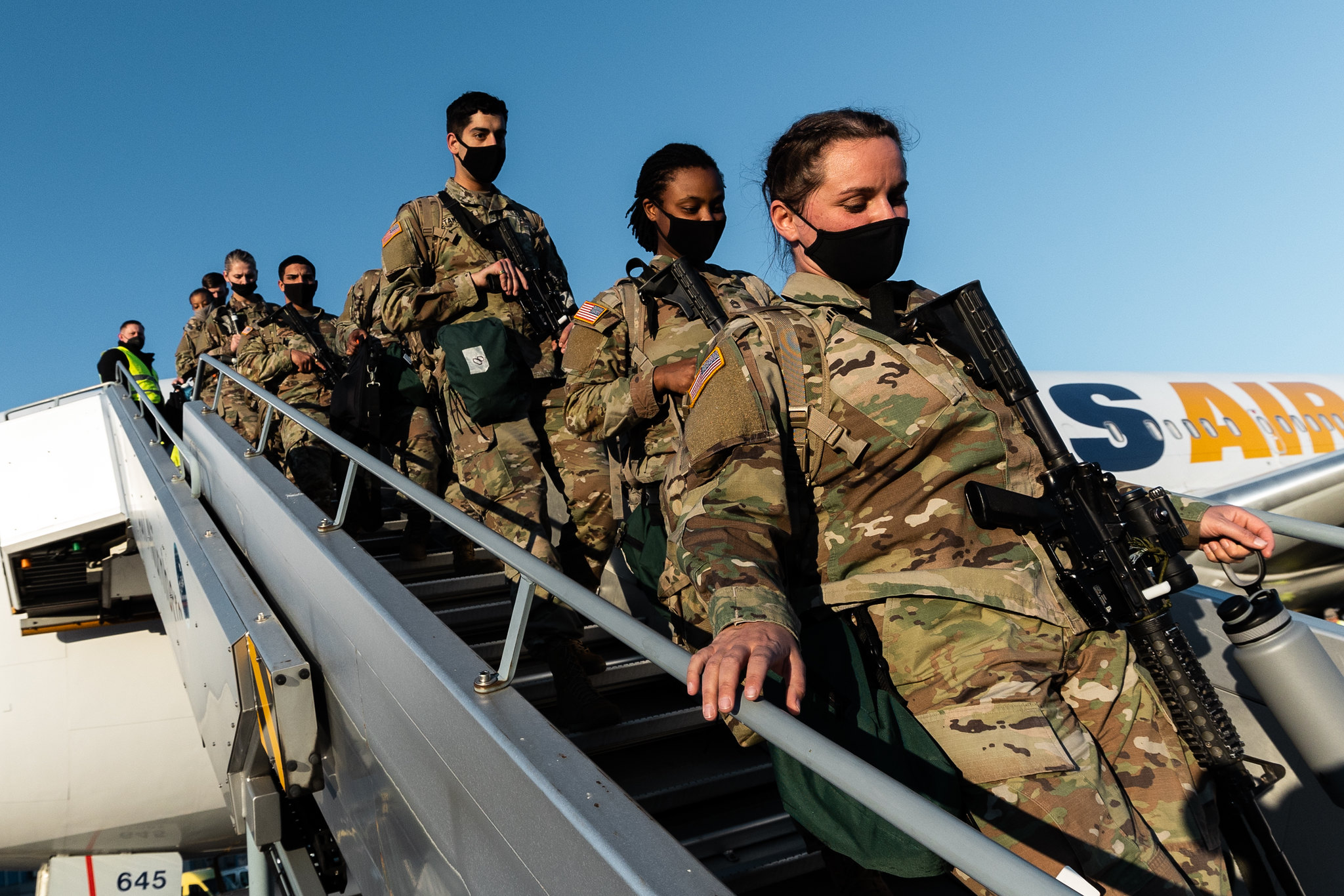 Above Photo: U.S. troops arrive at Nuremberg International Airport on Feb. 28 to join the NATO Response Force. which was activated for the first time in history in a collective defence context. NATO.

After a New York Times reporter grossly distorted what Putin and Zelensky have said and done about nuclear weapons, Steven Starr corrects the record.

And deplores Western media, in general, for misinforming and leading the entire world in a dangerous direction.

The New York Times recently published an article by David Sanger entitled “Putin spins a conspiracy theory that Ukraine is on a path to produce nuclear weapons.”  Unfortunately, it is Sanger who puts so much spin in his reporting that he leaves his readers with a grossly distorted version of the what the presidents of Russia and Ukraine have said and done.

Ukrainian Volodymyr  Zelensky’s recent statements at the Munich conference centered around the 1994 Budapest Memorandum, which welcomed Ukraine’s accession to the Nuclear Non-Proliferation Treaty (NPT) in conjunction with Ukraine’s decision to return to Russia the nuclear weapons left on its territory by the Soviet Union.

This is what Zelensky said, with emphasis added:

“I want to believe that the North Atlantic Treaty and Article 5 will be more effective than the Budapest Memorandum.

Ukraine has received security guarantees for abandoning the world’s third nuclear capability [i.e. Ukraine relinquished the Soviet nuclear weapons that had been placed in Ukraine during the Cold War]. We don’t have that weapon. … Therefore, we have something. The right to demand a shift from a policy of appeasement to ensuring security and peace guarantees.

I am initiating consultations in the framework of the Budapest Memorandum. The Minister of Foreign Affairs was commissioned to convene them. If they do not happen again or their results do not guarantee security for our country, Ukraine will have every right to believe that the Budapest Memorandum is not working and all the package decisions of 1994 are in doubt.”

Sanger’s Times article implies that it was a “conspiracy theory” that Zelensky was calling for Ukraine to acquire nuclear weapons. Sanger was not ignorant of the meaning of the Budapest Memorandum, rather he chose to deliberately ignore it and misrepresented the facts.

President Vladimir Putin, along with the majority of Russians, could not ignore such a threat for a number of historical reasons that The New York Times and ideologues such as Sanger have also chosen to ignore. It is important to list some of those facts, since most Americans are unaware of them, as they have not been reported in the Western mainstream media. Leaving parts of the story out turns Putin into just a madman bent on conquest without any reason to intervene.

First, both the provinces of Donetsk and Lugansk in the Donbass region voted for independence from Ukraine in 2014 in resistance to a U.S.-backed coup that overthrew the elected president Viktor Yanukovych in February of that year. The independence vote came just eight days after neo-Nazis burned dozens of ethnic Russians alive in Odessa.  To crush their bid for independence, the new U.S.-installed Ukrainian government then launched an “anti-terrorist” war against the provinces, with the assistance of the neo-Nazi Azov Battalion, which had taken part in the coup. It is a war that is still going on eight years later, a war that Russia has just entered.

During these eight years, the Ukrainian Armed Forces and Azov have used artillery, snipers and assassination teams to systematically butcher more than 5,000 people (another 8,000 were wounded) — mostly civilians — in the Donetsk Peoples Republic, according to the leader of the DPR, who provided these figures in a press conference recently. In the Luhansk People’s Republic, an additional 2,000 civilians were killed and 3,365 injured. The total number of people killed and wounded in Donbass since 2014 is more than 18,000.

This has received at most superficial coverage by The New York Times; it has not been covered by Western corporate media because it does not fit the official Washington narrative that Ukraine is pursuing an “anti-terrorist operation” in its unrelenting attacks on the people of Donbass.  For eight years the war instead has been portrayed as a Russian “invasion,” well before Russia’s current intervention.

Likewise, The New York Times, in its overall coverage*,* chose not to report that the Ukrainian forces had deployed half of its army, about 125,000 troops, to its border with Donbass by the beginning of 2022.

The importance of neo-Nazi Right Sektor politicians in the Ukraine government and neo-Nazi militias (such as the Azov Battalion) to the Ukrainian Armed Forces, also goes unreported in the mainstream corporate media.  The Azov battalion flies Nazi flags; they have been trained by teams of U.S. military advisers and praised on Facebook these days. In 2014, Azov was incorporated in the Ukrainian National Guard under the direction of the Interior Ministry.

The Nazis killed something on the order of 27 million Soviets/Russians during World War II (the U.S. lost 404,000). Russia has not forgotten and is extremely sensitive to any threats and violence coming from neo-Nazis. Americans generally do not understand what this means to Russians as the United States has never been invaded.

So, when the leader of Ukraine essentially threatens to obtain nuclear weapons, this is most certainly considered to be an existential threat to Russia. That is why Putin focused on this during his speech preceding the Russian invasion of Ukraine. Sanger and The New York Times must discount a Ukrainian nuclear threat; they can get away with doing so because they have systematically omitted news pertaining to this for many years.

Sanger makes a very misleading statement when he writes, “Today Ukraine does not even have the basic infrastructure to produce nuclear fuel.”

Ukraine is not interested in making nuclear fuel — which Ukraine already purchases from the U.S. Ukraine has plenty of plutonium, which is commonly used to make nuclear weapons today; eight years ago Ukraine held more than 50 tons of plutonium in its spent fuel assemblies stored at its many nuclear power plants (probably considerably more today, as the reactors have continued to run and produce spent fuel). Once plutonium is reprocessed/separated from spent nuclear fuel, it becomes weapons usable. Putin noted that Ukraine already has missiles that could carry nuclear warheads, and they certainly have scientists capable of developing reprocessing facilities and building nuclear weapons.

In his Feb. 21 televised address, Putin said Ukraine still has the infrastructure leftover from Soviet days to build a bomb. He said:

“As we know, it has already been stated today that Ukraine intends to create its own nuclear weapons, and this is not just bragging.

Ukraine has the nuclear technologies created back in the Soviet times and delivery vehicles for such weapons, including aircraft, as well as the Soviet-designed Tochka-U precision tactical missiles with a range of over 100 kilometers.

But they can do more; it is only a matter of time. They have had the groundwork for this since the Soviet era.

In other words, acquiring tactical nuclear weapons will be much easier for Ukraine than for some other states I am not going to mention here, which are conducting such research, especially if Kiev receives foreign technological support. We cannot rule this out either.

If Ukraine acquires weapons of mass destruction, the situation in the world and in Europe will drastically change, especially for us, for Russia. We cannot but react to this real danger, all the more so since let me repeat, Ukraine’s Western patrons may help it acquire these weapons to create yet another threat to our country.”

In his Times piece, Sanger states, “American officials have said repeatedly that they have no plans to place nuclear weapons in Ukraine.”

But the U.S. and NATO have refused to sign legally binding treaties with Russia to this effect. In reality, the U.S. has been making Ukraine a de facto member of NATO, while training and supplying its military forces and conducting joint exercises on Ukrainian territory. Why wouldn’t the U.S. place nuclear weapons in Ukraine — they have already done so at military bases within the borders of five other European members of NATO.  This in fact violates the spirit of the NPT, another issue that Sanger avoids when he notes that Russia has demanded that the U.S. remove nuclear weapons from the European NATO-member states.

For years the U.S. proclaimed that the Ballistic Missile Defense (BMD) facilities it was placing in Romania and Poland, on the Russian border, were to protect against an “Iranian threat,” even though Iran had no nuclear weapons or missiles that could reach the U.S. But the dual-use Mark 41 launching systems used in the Aegis Ashore BMD facilities can be used to launch Tomahawk cruise missiles, and will be fitted with SM-6 missiles that, if armed with nuclear warheads, could hit Moscow in five-to-six minutes. Putin explicitly warned journalists about this danger in 2016; Russia included the removal of the U.S. BMD facilities in Romania and Poland in its draft treaties presented to the U.S. and NATO last December.

I wonder if Sanger has ever considered what the U.S. response would be if Russia placed missile launching facilities on the Canadian or Mexican border? Would the U.S. consider that a threat, would it demand that Russia remove them or else the U.S. would use military means to do so?

Sanger states that today Russia takes a “starkly different from the tone Moscow was taking 30 years ago, when Russian nuclear scientists were being voluntarily retrained to use their skills for peaceful purposes.”

Russians would reply that 30 years ago NATO had not moved to Russian borders and was not flooding Ukraine with hundreds of tons of weapons and the U.S. had not yet overthrown the government in Kiev to install an anti-Russian regime.

While the Times is still considered the U.S. “paper of record,” during the last few decades it has devolved into the primary mouthpiece for the official narratives coming from Washington.

There is a real danger to the nation when a free press is replaced with corporate media that stifles and censors dissent. Rather than a free press, we now have a Ministry of Propaganda that acts as an echo chamber for the latest diktats from the White House. The systematic creation of false narratives by corporate media, designed to serve the purposes of the federal government, have so misinformed the American public about world events that we find the nation ready to go to war with Russia.

This is suicidal course for not only the U.S. and the EU, but for civilization as a whole, because this would likely end in a nuclear war that will destroy all nations and peoples.