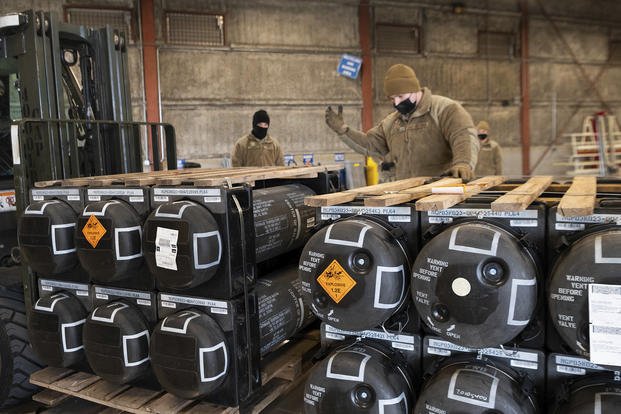 Ukraine: Why The War Started And Failed Attempts On Snake Island

Above photo: In this image provided by the U.S. Air Force, airmen and civilians from the 436th Aerial Port Squadron palletize ammunition, weapons and other equipment bound for Ukraine during a foreign military sales mission at Dover Air Force Base, Delaware, on Jan. 21, 2022. Mauricio Campino/U.S. Air Force / AP.

It is Victory Day. As Ernest Hemingway said:

Anyone who loves freedom owes such a debt to the Red Army that it can never be repaid.

The most important part of Vladimir Putin’s speech to the Victory Parade on the Red Square is the narrative that explains how the current war in Ukraine began. Putin is correct in seeing this as a NATO proxy war against Russia:

[D]espite all controversies in international relations, Russia has always advocated the establishment of an equal and indivisible security system which is critically needed for the entire international community.

Last December we proposed signing a treaty on security guarantees. Russia urged the West to hold an honest dialogue in search for meaningful and compromising solutions, and to take account of each other’s interests. All in vain. NATO countries did not want to heed us, which means they had totally different plans. And we saw it.

Another punitive operation in Donbass, an invasion of our historic lands, including Crimea, was openly in the making. Kiev declared that it could attain nuclear weapons. The NATO bloc launched an active military build-up on the territories adjacent to us.

Thus, an absolutely unacceptable threat to us was steadily being created right on our borders. There was every indication that a clash with neo-Nazis and Banderites backed by the United States and their minions was unavoidable.

Let me repeat, we saw the military infrastructure being built up, hundreds of foreign advisors starting work, and regular supplies of cutting-edge weaponry being delivered from NATO countries. The threat grew every day.

Russia launched a pre-emptive strike at the aggression. It was a forced, timely and the only correct decision. A decision by a sovereign, strong and independent country.

The use of ‘pre-emptive strike’ is somewhat misleading. In fact the Ukraine started the war on Wednesday, February 16 2022, when its forces near the Donbas republics began preparatory artillery strikes for an all out ground attack on the Donbas republics.

The OSCE mission reports showed that the great majority of impact explosions of the artillery were on the separatist side of the ceasefire line.

Those two issues, an imminent ground attack on Donbas and the Ukraine threatening to strive for nuclear weapons, drove the Russian decision on February 21 to recognize the Donbas republics as independent states. (The legal precedence for doing such is the ‘western’ recognition of Kosovo as an independent state.)

Common defense agreements between the independent states and the Russian Federation were signed. Three days later, during which the Ukrainian attacks on the Donbas republics continued, Russian troops entered the Ukraine under Article 51 of the U.S. charter.

Over the last days there were some interesting developments of the ground.

The city is on a hill about 260 meters above sea level. This is about 100+ meters higher than the areas north, south and west of it. Artillery stationed on the hill will have a very good view and can reach deep into Ukrainian held grounds. It will be able to interdict resupplies on nearby roads to the Ukrainian front troops.

The Ukrainian army process of withdrawing to ever ‘more favorable and fortified positions’ will probably end in Lviv.

However after previous Ukrainian air attacks Russian troops had already left the island and the Russian airforce had laid an ambush for the attack forces. The Russian Defense Ministry briefings mentioned Ukrainian losses around Snake (Zmeinyi) Island and related operations several times.

The following have been shot down in the air near Zmeinyi Island: 1 Ukrainian Su-24 bomber, 1 Su-27 fighter jet, 3 Mi-8 helicopters with paratroopers and 2 Bayraktar-TB2 UAV. The Ukrainian amphibious assault boat Stanislav has also been destroyed.

A Ukrainian naval corvette of project 1241 has also been destroyed near Odessa.

A total of 4 Ukrainian aircraft, 4 helicopters, including 3 with paratroopers on board, 3 Bayraktar-TB2 UAV and 1 Ukrainian Navy amphibious assault boat have been destroyed in the area during the day.

(Bounce platform is a mistranslation for a helicopter supply pad that is not a full airport.

The operation was quite costly for the Ukrainian side. Besides the 60+ paratroopers who were killed during the assault one of the helicopter also had the deputy commander of the Ukrainian navy on board. Today it was announced that Col. Ihor Bedzai was killed in action when his helicopter came under Russian airforce fire.

More than 4 helicopters, 4 jets and 6 Bayraktar drones were lost for zero gain. The U.S. is in the process of giving the Ukraine a total of 16 Mi-17 transport helicopters that were originally supposed to go to Afghanistan. At the current Ukrainian rate of losses such supplies, just like others, will not last for long.

Under the current circumstances Snake Island is of little military value. It seems that the sole point of the Ukrainian operation to retake it was to create a propaganda item for today’s Victory Parade. It now is one but for the Russian side.

The last briefing (09.05.2022 (19:15) by the Russian Defense Ministry (published after the above post) again mentions Snake Island:

According to the updated information, 6 Mi-8 and Mi-24 helicopters have been destroyed during the night near Artsiz in Odessa Region near the Chervonoglinskoe military airfield by Onyks high-precision missiles from the Bastion coastal missile system.

Over the past two days, the Kiev regime has made several desperate attempts to land air and sea assaults on Zmeiny Island, which is important for controlling the northwestern part of the Black Sea.

The Ukrainian provocation was thwarted as a result of the competent actions of a Russian Armed Forces unit on the island. The enemy suffered heavy losses.

4 Ukrainian airplanes, including 3 Su-24 and 1 Su-27, 3 Mi-8 helicopters with paratroopers on board, and 1 Mi-24 helicopter have been shot down in the air while repelling the attacks near Zmeiny Island.

Also, 3 armoured Ukrainian amphibious assault boats carrying Ukrainian naval personnel were destroyed during an attempted landing on the night of May 8.

As a result of Zelensky’s thoughtless provocation, more than 50 Ukrainian saboteurs have been killed at sea and on the coast during the landing and attempts to consolidate on the island.

24 bodies of dead Ukrainian servicemen were left on the shore of Zmeiny Island.