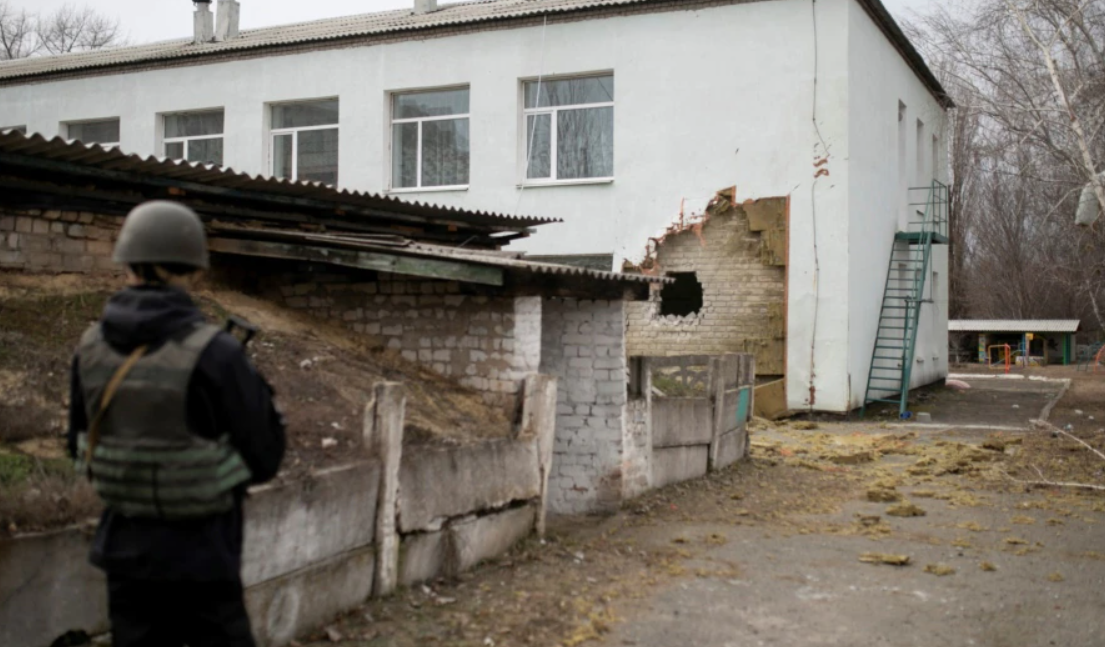 Above photo: A damaged building housing a kindergarten after it was shelled, in the town of Stanytsia Luhanska, Luhansk region, Ukraine, Feb. 17, 2022. AFP.

Pending French mediation, Putin-Biden talks, German distancing, Italian fears, Spanish uncertainties and opposition from the former Eastern bloc, as well as the regularly discredited deadlines of the improbable Russian invasions, the war always announced but never started has had its first outcome.

In a decision that unsettled the Western chancelleries, Vladimir Putin signed the diplomatic protocol recognizing the independent republics of Lugansk and Donetsk. The recognition was immediately followed by the signing of a cooperation and mutual assistance agreement, which will imply a Russian military presence in defense of the two republics and, at the same time, a clear warning to Kiev and its self-interested supporters.

Thus ends the dirty war, the only one that was really being waged despite the fact that the international media system was hiding it: that is, the Ukrainian shooting practices on the civilian population of Donbass, which for years have turned 4 million citizens into hostages of Kiev, with inhabitants becoming displaced, schools becoming targets, territory becoming cemetery. Until yesterday, this was the result of the recent offensive of the Ukrainian army in the Donbass, which tells better than a thousand lies what really happens on the border between Russia and Ukraine and who are the ones who really work tirelessly for the war.

Putin’s move opens an unprecedented political, diplomatic and military scenario. Political, because it initiates the Russian political counteroffensive, which has as its fundamental lever the security of its population and its borders. The recognition of the independent republics of the Donbass region now deprives Ukraine of a part of its territory, certainly; but it is a territory that had become independent since 2014, just like Crimea. Nothing strange, in fact: a people that feel Russian by historical, religious, political, linguistic and cultural belonging, has no desire to be incorporated into the model of the Third Reich dressed as McDonalds that governs Kiev thanks to a coup d’état.

Militarily and diplomatically it represents a double success for Moscow: it creates a buffer zone between Russia and Ukraine and further covers the border with Kiev and openly challenges Ukraine and the United States to continue the war against independent Donbass. It sets aside Ukrainian security as the only issue to be addressed in the geopolitical issue and puts the issue of Russian security back at the center of a possible political-diplomatic negotiation with the Western masters of Ukraine. Moreover, it leaves the future steps to be taken to diplomatic negotiations, suggesting that a possible Ukrainian military response against the Donbass could lead to a counter-offensive on a local scale that would also involve the ports of Mariupol and Odessa, strategic for Kiev.

NATO’s response seems for the moment much more prudent than the threats made until yesterday. Politically, one would have to be very brazen not to accept the recognition of the two independent republics, given that in 1992 the entire West, under pressure from Germany, Austria, the Vatican and the United States, immediately recognized the Croatian and Bosnian secession from Yugoslavia and armed, financed and supported them politically and militarily against Serbia. It even went so far as to ethically and legally abhor the recognition of secession on ethnic grounds. It did the same thing years later with Kosovo, which seceded from Albania. It is not clear why in this case the principle of legitimate secession should not apply.

On the military level, as Ukraine is not (yet) a NATO country, the Russian counter-offensive does not allow invoking Article 5 of the Atlantic Pact. The EU, as usual, has no policy and is waiting to hear from the United States about what to do. With the exception of Borrell, (a modest mixture of Francoism and narcissism that the EU has chosen to represent itself internationally, thus gaining more scorn than it already deserved) the European comments that matter are geared to take advantage of Putin’s move, hoping that it will end with the acceptance of the state of affairs and the imposition of sanctions aimed only at the two independent republics. These sanctions have no real effect and only serve to save the already worn-out face of a NATO unable to unite even on the feasibility of Kiev’s accession to the Alliance, let alone respond to Moscow.

The idea that, above all, France, Germany and Italy are cultivating, in fact – and which is giving Washington serious headaches – is that beyond the generic declarations of unity, the most important part of the EU wants to restart a global negotiation between the West and Russia. A negotiation partly different from the one imagined until yesterday, because Putin’s movement has already set a clear line in the negotiations: we are able to operate in any scenario, be it peace or war; if the thought of threatening Moscow by targeting it with missile batteries becomes reality, it will be guaranteed by all means that they cannot be deployed.

What is needed, therefore, is a table that puts regional security policies back on the agenda, in the knowledge that a refusal to consider Russia’s security needs will only cause Moscow to proceed autonomously to defend them. This would put on the ground the issues that Europe wants to avoid at all costs, i.e. military. Putin, moreover, has already demonstrated throughout his presidential career, from Chechnya to Donbass to Georgia and Belarus, Kazakhstan and above all Syria, that he is not willing to be surrounded by NATO, nor to be threatened militarily. That in matters of national security it does not accept threats and does not hesitate to act quickly and effectively to defend Russian national interests.

The Russian political counteroffensive belies the heavy succession of shameful forecasts, completed with dates for imaginary Russian invasions, which have created a new and deep crack in the credibility of the United States and its British butlers who, after the weapons of mass destruction in Iraq, the Taliban responsible for the Twin Towers and the Syrian chemical weapons, are rightly entering the circle of ridicule.

Therefore, economic and financial sanctions to curb Russia’s growth is an indispensable objective. Laying further siege to Russia could provoke a reaction from Russia, leading to new international sanctions against Moscow. The result would be fantastic for the United States: it would weaken the trade relationship between Russia and Europe and, above all, block the implementation of the North Stream 2 gas pipeline.

Sanctions: who is threatening whom?

It is said that the Western sanctions that would follow an eventual “invasion” would be extremely harsh for Russia (which already suffers unfairly). There is no doubt that, in the short term, they would disrupt foreign investment and force Moscow first to retaliate and then to differentiate its import and export market. But while sanctions would be a big deal for the U.S., they would also be very damaging for the EU: for example, blocking the pipeline from coming on line would mean the EU giving up gas supplies at a limited price.

The EU imports about 40% of its gas needs from Russia), so a blockage of supplies would not so much be a threat to Moscow as to Brussels, because it would make the enforcement of Western sanctions against the Kremlin self-punishing. Moscow has already authorized the construction of a new pipeline through Mongolia that will carry Russian gas to China, which needs energy to sustain its growth.

For Europe, however, the scenario would be complicated. In the event of a further reduction in available gas, the price would rise to unacceptable levels for EU countries, which would be forced to proceed randomly and not with a common policy, given the different options. It is no coincidence that Draghi has already indicated that Italy will not adhere to sanctions affecting the energy sector. Even Germany, which has Russian gas as its main source of energy supply, would be forced to resort to coal, which would blow up all environmental constraints and would not provide a short-term solution to the problem.

Also on the financial level, although Moscow would find it difficult, structural problems would arise for Europe, given the exposure of several countries to Moscow (the EU’s fifth largest trading partner), amounting to 56 billion euros, which would obviously no longer be repayable. These debts would no longer be recoverable, and the repercussions for banks would be extremely serious. In return, since the U.S. exposure is minimal, the U.S. would have no problem in the short to medium term in disrupting financial flows with Russia.

In addition, there is the threat of Moscow withdrawing from the SWIFT financial transmission system (which links 11,000 banks in 200 countries). The decision would hurt Moscow, of course, but not to the point of paralyzing it, as it was prepared since 2014 for this scenario. Similarly, the inclusion of Russian banks on the “blacklist” would not have particularly serious effects for Moscow either.

Excluding Moscow from SWIFT would be the most classic boomerang, as it would provoke a series of chain reactions from countries hostile to the US that would risk turning the international economy into a clash of blocks. The first and most important consequence would be the acceleration of the “independent financial infrastructure” project decided by Moscow and Beijing and, given the weight and emergence of economies not aligned with Washington and Brussels, now intercontinental leaders of debt and certainly not of expansionary policies, the risk of a systemic implosion in the short term seems well founded.

The inescapable question is: is the West really ready for a reset that will also punish its interests harshly? To give even more strength and strategic perspective to the alliance between Beijing and Moscow? And all this for Ukraine and its Nazi government?