Ukraine-Russia: Who Is The Real Aggressor

Tensions between Russia and Ukraine have risen sharply following the Nov. 25 seizure of three Ukrainian naval vessels and the detention of 24 Ukrainian sailors by the Russian navy. The incident took place as the vessels were attempting to pass from the Black Sea through the narrow Kerch Strait into the Sea of Azov, a shallow body of water bounded by Ukraine to the northwest and Russia to the southeast. After the incident, Russia blocked some additional naval traffic through the strait.

Ukraine is calling the Russian actions a violation of international law, while Russia says the Ukrainian ships attempted an unauthorized passage through Russian territorial waters.

Ukrainian President Petro Poroshenko has called on NATO to send warships into the Sea of Azov. He also has declared martial law in areas of Ukraine bordering Russia, claiming a possible Russian invasion.

For its part, Russia is charging that Poroshenko provoked the incident in order to build up nationalist support ahead of the presidential elections scheduled for March 31. Most polls show his approval ratings barely reaching double digits. It’s also possible that Poroshenko was willing to put his own country at risk in order to ingratiate himself with his anti-Russian Western patrons.

As of Dec. 3, there is no indication that NATO will intervene, but virtually all establishment observers are describing the situation as very dangerous.

U.S. Assistant Secretary for European and Eurasian Affairs Victoria Nuland and Ambassador to Ukraine Geoffrey Pyatt, offering cookies and (behind the scenes) political advice to Ukraine’s Maidan activists and their leaders. By Andrew Kravchenko, Associated Press.

BACKGROUND TO THE PRESENT CRISIS

It’s impossible to understand anything about present Russian-Ukrainian relations without going back at least to late 2013, when mass demonstrations broke out against then-Ukrainian president Viktor Yanukovych.

Ukraine was trying to decide if it wanted closer economic relations with Russia, its traditional major trading partner, or with the wealthier European Union. The country’s parliament, or Rada, was pro-EU, while Yanukovych favored Russia. At the time – as now – many of the country’s politicians were corrupt, including Yanukovych, so there already was popular resentment against him. When he decided to oppose the Rada over trade agreements, mass protests took place in Maidan Nezalezhnosti (Independence Square) in the capital city of Kiev.

But what began as peaceful, even celebratory gatherings were quickly taken over by right-wing paramilitary organizations modeled after WWII-era Ukrainian militias allied with the Nazi occupiers. Violence followed and Yanukovych fled the country. He was replaced by acting president Oleksandr Turchynov, and then the pro-U.S., pro-EU, pro-NATO Poroshenko.

The movement that came to be known as Maidan was an illegal, unconstitutional, violent coup – and it was backed to the hilt by the U.S. government and many countries in the European Union.

Then-Assistant Secretary of State for European and Eurasian Affairs Victoria Nuland, who personally cheered on the Maidan protesters, later bragged that the U.S. had spent $5 billion preparing Ukraine “to achieve its European aspirations.” In other words, the U.S. had spent $5 billion intervening in the internal affairs of Ukraine to help steer it away from Russia and toward an alliance with the West. 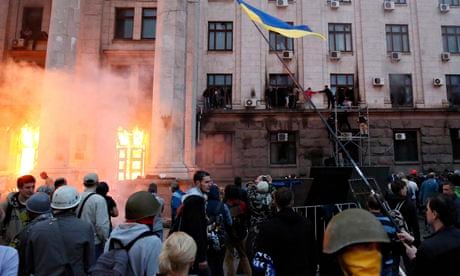 In May 2014, people wait to be rescued from the trade union building in Odessa, after it was set on fire by pro-Ukrainian attack. Photograph: Reuters.

AFTERMATH OF THE COUP

The coup split the country along the lines of ethnicity and politics and had devastating consequences for Ukraine, a fragile nation that has only been an independent country since 1991. Before that it was part of the Soviet Union, and before that it was a contested region dominated by a series of other forces, including Vikings, Mongols, Lithuanians, Russians, Poles and Austrians.

Today 17.3 percent of the population is made up of ethnic Russians, who live mainly in the eastern part of the country, which borders Russia. Many more speak Russian as their primary language. And they tend to identify with the Soviet victory over the Nazi occupation of Ukraine.

During Soviet times, both Russian and Ukrainian were official state languages. One of the first acts of the new coup government was to declare that the only official language would be Ukrainian. It also quickly went about banning symbols of the Soviet era, replacing them with memorials to Nazi collaborators.

Shortly after the coup, fears of domination by an anti-Russian, pro-fascist central government led the people of Crimea to hold a referendum in which the majority voted to reunite with Russia. (Crimea had been part of Soviet Russia until 1954, when it was administratively transferred to Soviet Ukraine.) Russia agreed and annexed the region. This was the “invasion” denounced by Kiev and the West.

Meanwhile, fighting broke out in the heavily industrialized and largely ethnic Russian region of Donbass, with local leftists declaring independence from Ukraine. This sparked a fierce Ukrainian opposition and fighting that to date has cost some 10,000 lives.

And in the historically Russian-oriented city of Odessa, a movement emerged that demanded a federal system in which local governors would be locally elected, not appointed by the central government, as they are now. On May 2, 2014, dozens of activists promoting this view were massacred at the House of Trade Unions by a fascist-led mob. See Odessa Solidarity Campaign.

All this would make the national situation difficult enough, but these crises took place within the international context of rising tensions between the U.S.-led West and Russia. 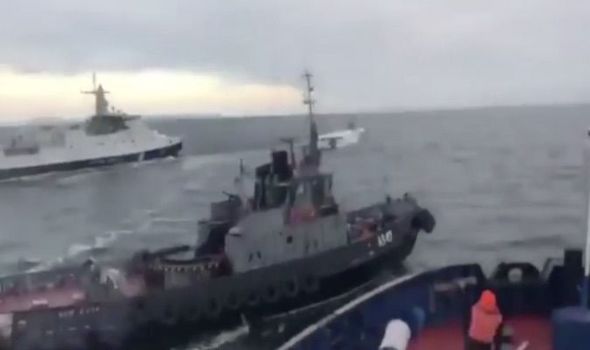 Russian warship rams into a Ukrainian vessel after it ventured illegally into Russian territory. Image from YouTube.

WHO IS THE REAL AGGRESSOR?

Since the collapse of the Soviet Union, the U.S.-led North Atlantic Treaty Organization, or NATO, has been recruiting the former Soviet republics into its anti-Russian alliance. Ukraine is not yet a NATO member, but it operates as such in all but name. The U.S. and other Western countries train and supply its soldiers, help build its bases and conduct regular, massive land, sea and air military exercises with Ukraine, which has a 1,200-mile land border with Russia and with which it shares the Black Sea and the Sea of Azov.

Politically, Russia is blamed for every evil under the sun, while being projected as a mighty military power whose aggressive intentions must be stopped. The truth is that, while Russia has rough parity with the West in terms of nuclear weapons, its total military spending is just 11 percent that of the U.S. and 7 percent that of the combined 29 NATO countries. It is the U.S. and NATO militaries that are operating right up to Russia’s borders, not the other way around. And, increasingly, Ukraine is becoming the central battleground for this emerging U.S./NATO – Russia crisis.

However the present crisis is resolved, we must remember that working and oppressed people in the West have nothing to gain from this dangerous situation, and everything to lose if war against Russia were actually to break out. The antiwar movement and its allies must speak out forcefully against U.S. and NATO aggression. We must demand that the massive amounts of tax dollars being spent on war and war preparations instead be used for the good of the people here at home and reparations for the crimes Washington and NATO have committed abroad.

Stop the Aggression against Russia!

Money for Jobs & Education, not for Wars & Occupation!

Stop the Wars at Home & Abroad!