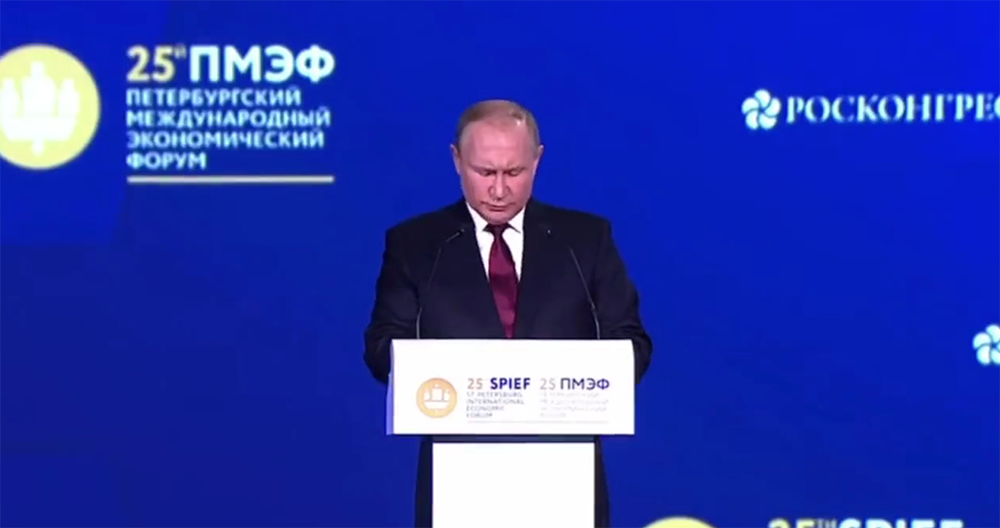 Ukraine – The US Is Moving Towards Escalation

Above Photo: Screenshot of Putin speech at Petersburg economic forum.

The catastrophic economic consequences of the ‘western’ proxy war with Russia are setting in. As a result the high inflation, caused by supply side constrains due to sanctions and far too much spending, will ruin the middle classes of many countries.

To those who did not wear blinders and who knew of the real economies of the ‘west’ and Russia this was very predictable and predicted:

The U.S. is pushing its European ‘allies’ to commit economic suicide by sanctioning everything Russia. The U.S. should be more careful. It is one of the biggest buyers of Russian oil and its aircraft industry depends on titanium from Russia. Russia surely knows who is trying to hurt it the most and it surely knows how, and has the means to, hurt back.

The hurt has not at all reached its peak. This winter will be very difficult for Europe. Poor countries are even worse off. Many will experience hunger crises and riots.

Today the Russian president Vladimir Putin held a speech at the Petersburg economic forum. The transcript isn’t out yet but here are excerpts from a Twitter thread:

The Eurasianist @Russ_Warrior – 12:58 UTC · Jun 17, 2022⚡President Putin at #SPIEF2022: “The United States, having declared victory in the Cold War, declared themselves the messengers of God on earth, who have no obligations, but only interests. They seem not to notice that new powerful centers have formed on the planet”

Putin at #SPIEF2022: “The changes in the world are fundamental, pivotal and inexorable. And it is a mistake to believe that you can sit out at the time of rapid changes, wait out that supposedly everything will return to normal, everything will be as before. It won’t!“

“The EU has totally lost its political sovereignty, its elites are dancing to someone else’s tune, causing harm to their own population”

“This problem has not arisen today, not in the last 3-4 months, and it is not #Russia’s fault. We would be pleased to be so omnipotent. The situation has been getting worse for years, due to activities of those who planned to break trade flows,” President Putin stressed

❗”Everyone who wants to continue to work/cooperate with Russia is being threatened by the United States” – President #Putin “However, this shows if real leaders are at the helm of a country or not”, the president stressed.

“Russia is entering the coming era as a powerful sovereign country and only strong sovereign states can have their say in the emerging world order, or are doomed to remain or become a colony,” President Putin concluded his speech at #SPIEF2022

Every word of that is true. Maybe Putin reads Moon of Alabama as I have made many of those points again and again.

It will not only be the current elite of Europe that will be replaced. The U.S. will see similar changes. Biden and the Democrats are toast:

The survey of 1,541 U.S. adults, which was conducted from June 10-13, found that if another presidential election were held today, more registered voters say they would cast ballots for Donald Trump (44%) than for Biden (42%) …Since Biden took office, no previous Yahoo News/YouGov poll has shown him trailing Trump (though Biden’s most recent leads have been within the margin of error, like this one is for Trump). One year ago, Biden led Trump by 9 percentage points. In 2020, Biden won the White House by more than 7 million votes.

Yet Biden’s job approval rating has been atrophying for much of the last year, and the new survey shows that it has never been weaker. A full 56% of Americans now disapprove of the president’s performance — the highest share to date — while just 39% approve. Three weeks ago, those numbers were 53% and 42%, respectively.

On average, Biden’s job approval scores are now a few points worse than Trump’s were at the parallel stage of his presidency.

Among all Americans, Trump (43%) now has a higher personal favorability rating than Biden (40%) as well. Meanwhile, nearly two-thirds of independents (64%) have an unfavorable opinion of Biden, and just 28% say they would vote for him over Trump.

A compromise in Ukraine with significant territorial concessions to Russia – the only conceivable way to end the war – would humiliate Washington.A negotiated solution to the Ukraine war, though, is not impossible. Washington could continue to portray itself as the defender of Ukraine’s sovereignty while encouraging European leaders to do the dirty work and force Ukraine into negotiations with Moscow.

A possible hint in this direction came on June 14 from the US Undersecretary of Defense for Policy Colin H. Kahl, who declared: “We’re not going to tell the Ukrainians how to negotiate, what to negotiate and when to negotiate. They’re going to set those terms for themselves.”
…
The United States won’t tell Ukraine what to do, Undersecretary Kahl declared. But that doesn’t prevent other governments from making Zelensky an offer he can’t refuse. Zelensky adviser Oleksiy Arestovych told Germany’s Bild-Zeitung on June 16 that German Chancellor Scholz, French President Macron and Italian President Draghi might deliver such a demand to Zelensky during their current visit to Kyiv.

I hope that they did so. But today, without any announcement, the British prime minister Boris Johnson, undoubtedly on order of Biden, appeared in Kiev to lobby for more war just like he did at the end of March when he told Ukraine’s president Zelensky to ditch the negotiations with Russia.

That is why I fear that Michael Brenner is right and that Biden will escalate the war by attacking somewhere else:

Necessity is the mother of invention — or so it is said. However, grasping what is “necessary” can be a very slippery business. An actual recasting of how one views a problematic situation normally is a last resort. Experience and history tell us that, as do behavioral experiments.
…
So, you are stuck with the albatross of a truncated, bankrupt Ukraine hung around your neck. There is nothing that you can do to cancel these givens — except a direct, perhaps suicidal test of force with Russia. Or, perhaps, a retaliatory challenge elsewhere. The latter is not readily available — for geographic reasons and because the West already has expended its arsenal of economic and political weaponry.Over the past year, the U.S. attempted to foment Maiden style regime changes in Belarus and Kazakhstan. Both were foiled. The latter was with the connivance of Turkey, which deployed a contingent of bashi bazouks from the stock of Syrian jihadis it keeps on call in Idlib (to be deployed as President Recep Erdogan did more successfully in Libya and Azerbaijan).

There remains one conceivable sensitive target: Syria. There, the Israelis have become increasingly audacious in goading the Russians by airstrikes against Syrian infrastructure as well as military facilities.

Now, we see signs that Moscow’s tolerance is wearing thin, suggesting that further provocations could spark retaliation which Washington then could exploit to ratchet up tensions. To what avail? Not obvious — unless the ultras in the Biden administration are looking for the kind of direct confrontation that they’ve avoided in Ukraine, until now.

The implication is that the denial option and the incremental adjustment option are foreclosed. Serious rethinking is in order — logically speaking.

The most worrisome scenario sees the frustration and anger and anxiety building in Washington to the point where it encourages a reckless impulse to demonstrate American prowess. That could take the form of an attack on Iran in the company of Israel and Saudi Arabia — the region’s new odd couple.

Another, even grimmer prospect would be a contrived test of wills with China. Already we see growing evidence of that in the bellicose rhetoric of American leaders from U.S. President Joe Biden on down.

The Pentagon is not ready for a war on China. Iran is too strong and would respond to an attack by launching its huge missile arsenal on Israel and U.S. allies in the Gulf. This leaves Syria. It is unlikely by chance that the Wall Street Journal reported yesterday that the U.S. is coordinating Israeli airstrikes in that country:

WASHINGTON—Israel secretly coordinates with the U.S. on many of the airstrikes it carries out in Syria as the allies face a battlefield crowded with militant groups, Iranian-backed militias and foreign militaries, according to current and former U.S. officials.

I expect those airstrikes, like last week’s attack on the airport of Damascus, to intensify with the hope to divert Russian attention from Ukraine.

Russia is of course 100% prepared for that but U.S. miscalculations that led to this are many and I do not expect that tendency to change anytime soon.

In his latest talk about The causes and consequences of the Ukraine war (vid) John Mearsheimer also speaks of why he thinks that an escalation is likely, and what the potential results might be. Without the Q&A it is only one hour long and well worth your time.