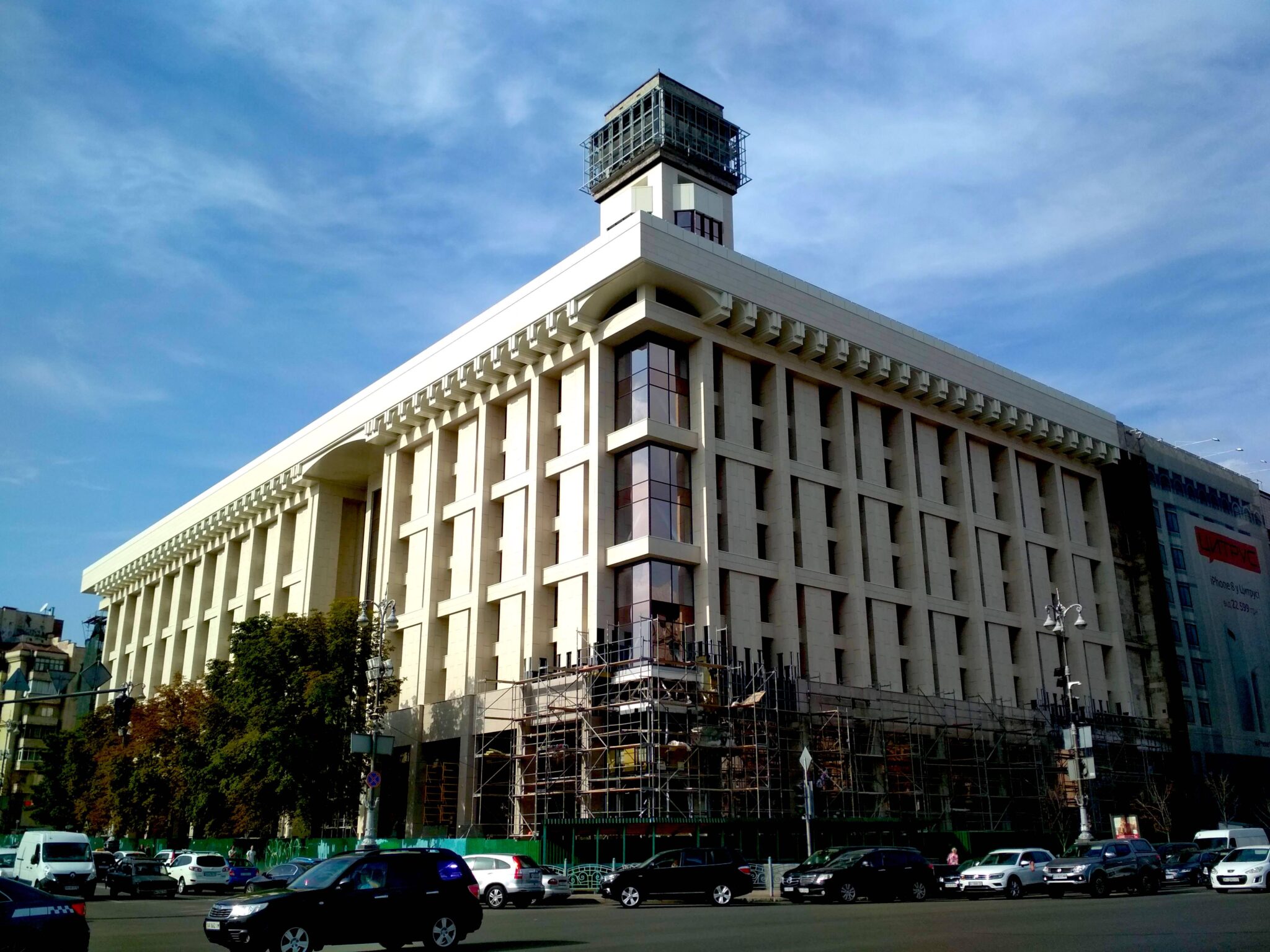 Note: This is a classic example of ‘shock doctrine’ – using a crisis to force through neoliberal policies.

In two laws passed on Monday and Tuesday, MPs voted to legalise “zero-hours contracts” and made moves towards removing up to 70 percent of the country’s workforce from protections guaranteed by national labour law.

The latter measure means the national labour code no longer applies to employees of small- and medium-sized enterprises; instead, it is proposed that each worker strikes an individual labour agreement with their employer. It also removes the legal authority of trade unions to veto workplace dismissals.

Draft law 5371 had previously been criticised by the International Labor Organization, as well as Ukrainian and European trade unions, on the basis that it could “infringe international labour standards.”

Ukraine’s ruling Servant of the People party argued that the “extreme over-regulation of employment contradicts the principles of market self-regulation [and] modern personnel management.”

Red tape in Ukraine’s HR laws, it suggested, “creates bureaucratic barriers both for the self-realisation of employees and for raising the competitiveness of employers.”

The Federation of Trade Unions of Ukraine will now ask President Volodymyr Zelensky to veto draft law 5371 when it goes to him for signature — but will not make the same request over the proposed law on zero-hours contracts, Ukrainian MP Vadym Ivchenko told openDemocracy.

According to the U.N.’s latest numbers, Russia’s invasion has led to at least 7 million people becoming displaced inside Ukraine itself, which has been compounded by a severe economic crisis hitting families and individuals hard. At the same time, the World Bank has predicted that Ukraine’s economy will contract by 45 percent this year.

With these factors in mind, Lomonosova argued that Ukrainians have little choice or bargaining power when it comes to employers — the number of available vacancies is vastly disproportionate to the number of people now looking for work in the country. “People right now have no bargaining power, and trade unions cannot protect them,” she said.

Speaking to openDemocracy, Lomonosova expressed a fear that, as a result of the displacement, “many people will find themselves in the situation of Ukrainian migrant workers” in their own country — meaning, for instance, people will have little choice but to accept poor conditions and to be ever more dependent on their employers.

“These are draft laws that business is waiting for, draft laws that will protect the interests of all entrepreneurs. And workers, too, by the way,” wrote MP Danylo Hetmantsev on Telegram on 9 July.

“A worker should be able to regulate his relationship with an employer himself. Without the state,” noted Hetmantsev, who is head of the Ukrainian parliament’s finance committee.

“This is what happens in a state if it’s free, European and market-oriented. Otherwise, the country will be travelling with one leg on an express train to the EU, and with another inside a Soviet-era train going in the other direction.”

Ukrainian labour lawyer George Sandul previously told openDemocracy that MPs had used Russia’s invasion of the country as a “window of opportunity” in which to try to push through drastic changes to labour legislation.

Lomonosova, of Cedos, agreed with Sandul, arguing that deregulation and the stripping back of social guarantees was a long-term policy of the Ukrainian government even before the war and was likely part of an effort to attract foreign investors.

She pointed to the fact that both of the laws passed this week date to an early attempt by the Zelensky administration and the ruling party to deregulate labour legislation in 2020-21. This attempt was beaten back as a result of a protest campaign by Ukrainian trade unions, a prospect now hard to imagine due to the war and martial law, Lomonsova said.

As she put it, the Ukrainian government and ruling party are also now increasingly talking about the fact that the state “cannot afford welfare, employment benefits or protection of labour rights”  because of the war.

In contrast to the deregulation trend, Lomonsova says that there is clear support among the Ukrainian public for social democracy.

“Year on year, opinion surveys have shown that Ukrainians have strong social democratic attitudes, including in favour of welfare,” Lomonosova said. “They expect the government to protect their labour rights and offer a complete social package. Not even war can change this.”

Under Ukraine’s new zero-hours legislation, employers who choose to use the contract option will be able to call up workers at will, though contracts must define the method and minimum timeframe for informing an employee of work, and the response time of the worker to agree or refuse to work.

The legislation also says people employed on these new contracts must be guaranteed a minimum of 32 hours’ work a month, and that the percentage of employees on zero-hours contracts at company can’t be more than 10 percent.

In its explanation of the law, the Ukrainian government stated that people involved in irregular work are currently employed “without any social or labour guarantees.”

Therefore, it says, zero-hours contracts — a term the government used — will help “legalise the work of freelancers, who mostly work on short-term projects and are not limited to working for a single client.”

Labour lawyer and activist Vitaliy Dudin told openDemocracy that, as a result of the economic crisis caused by the war, Ukrainians are facing ever greater “economic risks” and poverty — and this means that Ukrainian employers “will be able to radically reduce labour costs”.

The new contracts proposed under zero-hours legislation, he suggested, could also lead to two-tier workplaces, where employers offer secure jobs to loyal or non-unionised staff, while others face precarious employment or immediate dismissal for reasons manufactured by the employers.

This could affect workplaces with hundreds of workers, including public sector jobs at risk of austerity policies, such as hospitals, railway depots, post offices and infrastructure maintenance, Dudin said.

“This is a disastrous step towards precarisation,” Dudin said, and one that “calls into question the very right of Ukrainians who have been affected by the war to get a means of living.”

What Happens After the War?

European trade union groups have long criticised the growing trend towards labour liberalisation in Ukraine since Zelensky and his political party, Servant of the People, came to power in 2019.

On July 14, as rumours of a new vote on draft law 5371 spread, three European trade union confederations expressed their concern that the Ukrainian government and ruling party “continue to reject the E.U.’s values of social dialogue and social rights” with its labour liberalisation programme.

“We are strongly concerned about regressive labour reforms continuing after the emergency of war is over,” the unions’ letter said, claiming the reforms “go in the opposite direction to E.U. principles and values”.

Ukrainian parliamentarians have previously criticised draft law 5371 as a potential danger to the country’s integration into the European Union. Ukraine was granted E.U. candidate status in late June.

Both Ukraine’s 2014 Association Agreement with the E.U. and its 2020 Political, Free Trade and Strategic Partnership Agreement with the U.K. contain provisions on ensuring workplace protections — including against attempts to attract international investment.

László Andor, a former E.U. commissioner for employment, social affairs and inclusion between 2010 and 2014, told openDemocracy that he believed this new legislation suggested that Ukraine was going in a “completely different direction” from E.U. norms on decent work.

“This case is a big dose of opportunism,” said Andor, now secretary general of the Foundation for European Progressive Studies, a Brussels think tank. “Ukrainian lawmakers need to understand better what the difference is between a continental European model and these moves towards a very precarious labour market. Ukrainian trade unions are not being listened to sufficiently. This would be elementary in the European Union.“

“There is an enormous amount of national cohesion in Ukraine, which the rest of the world admires,“ Andor continued. “But these moves, in my opinion, can also undermine national unity — something very much needed for resisting a foreign invasion.“

Proponents of the law consider Ukrainian trade unions’ efforts at defeating labour liberalisation an attempt to “preserve their influence“ and that ILO conventions on workplace protections are “out of step“ with the modern labour market and the needs of small and medium-sized businesses.

While ruling party MPs have suggested that draft law 5371 will be passed as a temporary, wartime measure, MP Mykhailo Volynets, a member of the same Batkivshchyna party as Ivchenko, argued in a post on Facebook that “it is clear that no one will be able to undo this situation later.”

“The labour code will no longer apply, collective agreements will be eliminated, and even those mechanisms of employee protection that are in place today will not work. This is a brazen violation of international norms and standards in the field of labour,” he said.