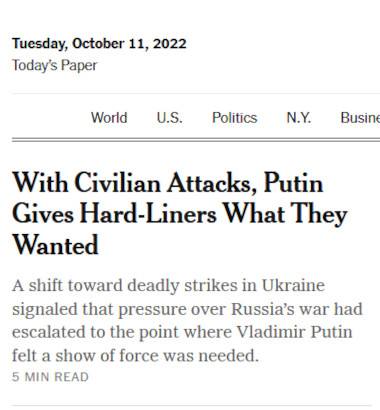 Today Russia’s missile and drone onslaught on Ukrainian infrastructure continues. I yesterday posted 25 headlines which over the last 7 month  predicted that Russia would soon ‘run out of missiles’.

For laughs: The ‘coping’ mechanism after yesterday’s 200+ missile and drones is the very same I had debunked:

Dmitri Alperovitch @DAlperovitch – 14:48 UTC · Oct 10, 2022As horrible as today was for Ukraine today, the sliver of good news here is that Russia likely can’t sustain this rate of missile launches. It’s very telling that they have not had this rate of long range fires since the start of the war.

The NY Times is lying:

With Civilian Attacks, Putin Gives Hard-Liners What They Wanted

‘Civilian attacks’ when, as the NYT itself reports, only 14 persons were killed and less than 100 wounded yesterday during 200+ missile and drone strikes:

The attacks killed at least 14 and wounded scores of others, while countless more in cities across Ukraine were terrified by dozens of incoming missiles explicitly targeting civilian infrastructure.

How many of those were killed by Ukrainian air defense misses is not known. It is sad that people get killed in a war but sometimes unavoidable.

The Ukraine military has killed way more civilians by its artillery strikes on Donetsk city. In 2003 U.S. ‘shock and awe’ in Baghdad killed at least 10,000 people. Israel kills hundreds of civilians during each of its frequent onslaughts on Gaza. Russia is obviously avoiding to kill civilians but still gets accused of doing it.

—
Who is really killing Ukrainian civilians?

Max Blumenthal @MaxBlumenthal – 6:23 UTC · Oct 10, 2022“We haven’t any time to put them in jail. They disappeared… somewhere”
A local official jokes of massacring pro-Russian citizens of Ukraine in towns vacated by Russian forces
The human rights industry is basically forbidden from acknowledging this

Quoted Tweet
Анатолий Шарий @anatoliisharii – 18:50 UTC · Oct 9, 2022A district deputy from Ukraine brags to a Zelensky-affiliated channel “journalist” how they killed many Ukrainians they considered to be “enemy agents.” “These people gone missing”. It’s fun for them. Embedded video

Ukrainian is false flagging its murdering of civilian ‘collaborators’:

—
Russia had so far also avoided to hit significant Ukrainian infrastructure. Yesterday its President Vladimir Putin explained why it had to change that. The Dugina murder, sabotage attacks within Russia, NATO destroying Nord Stream 2, and the Kerch bridge attack changed the picture:

The President held a briefing session with permanent members of the Security Council, via videoconference. – Kremlin

…
Thus, the Kiev regime, by its actions, has actually put itself on the same level as international terrorist groups, and with the most odious of those. It is simply no longer possible to leave crimes of this kind without retaliation.This morning, at the proposal of the Defence Ministry and in accordance with the plan of Russia’s General Staff, a massive strike was launched with long-range precision air, sea and land-based weapons against Ukrainian energy, military and communications facilities.

In the event of more attempts to stage terrorist attacks on our territory, Russia’s response will be harsh and commensurate with the threats posed to the Russian Federation. Nobody should have any doubts about that.

Kit Klarenberg @KitKlarenberg – 18:25 UTC · 10 Oct 2022Now, this is pretty big. Advise you read in full. In brief though, “audacious” plans for destroying #KerchBridge drawn up at request of infamous British military spook Chris Donnelly, at precisely the time London was sabotaging peace talks between Russia and Ukraine this April.
EXPOSED: Before Ukraine blew up Kerch Bridge, British spies plotted it – Grayzone

MoA has previously exposed Donnelly and his Institute for Statecraft:

The ‘Integrity Initiative’ – A Military Intelligence Operation, Disguised As Charity, To Create The “Russian Threat”

Don’t Buy the Narrative on Ukraine – American Conservative
The Western party line about a struggling Russia and a resilient Ukraine overlooks hard realities.

—
Whitney is citing the OSCE reports without crediting MoA which covered them before the start of the war:

Some of Us Don’t Think the Russian Invasion Was “Aggression.” Here’s Why. – M. Whitney / UNZ