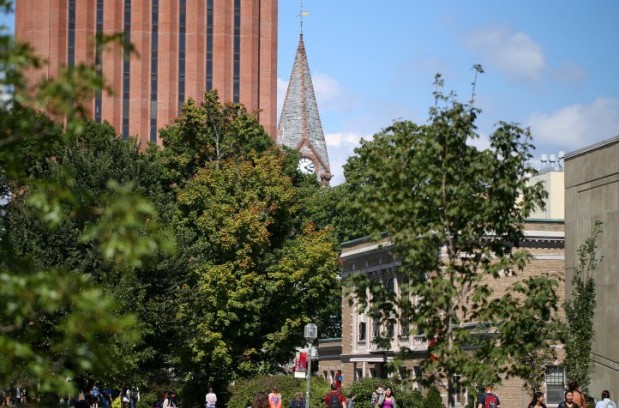 University of Massachusetts officials announced Tuesday that they would back a policy for the university system to divest from fossil fuel companies after students occupied a campus administrative building. Fifteen protesters were later arrested after refusing to vacate the scene.

“Throughout my career, I have stood for environmental progress and reducing the carbon footprint,” UMass President Marty Meehan said in a statement. “Although we find ourselves meeting in a moment of contention, I embrace and I believe that the University leadership broadly shares the goals that the divest-campaign students have been advocating for.”

Still, student protesters weren’t satisfied with the announcement. Protesters continued the sit-in at UMass Amherst’s Whitmore Administration Building hours after the university made its pledge. The protest had already drawn 100 students earlier in the day, according to the student-run UMass Fossil Fuel Divestment Campaign Facebook page. Around 6 p.m., more protesters flocked to the building for a rally while others remained inside.

“100+ students have been kept in Whitmore for 2 hours after the building is closed and the University administration refuses to make a decision OR let pizza into the building to feed their students and faculty!” a protester wrote on the page. “Are you PISSED about the way UMass is treating their students who are compelling the University to stand on the right side of history?”

Felipe Carvalho, a 21-year-old senior studying finance at UMass Amherst who has played a role in the movement, said that the continued protests aren’t meant to undermine the pledges made by university officials, but to push them to act swiftly in the decision process.

“We believe in their power to lead and to make decisions. We appreciate their support,” he told Boston.com. “We know a pledge to advocate can just lead to more dialogue. We believe that we can move them faster and we can move them [to decide] today.”

As student protests continued into the evening following Meehan and Woolridge’s announcement, UMass police stepped in and arrested 15 protesters, charging them with trespassing in the building after issuing multiple orders for students to disperse and warnings that they would be arrested, according to the university statement.

“Despite the pledge of advocacy for divestment from fossil fuels by Meehan and Woolridge, the student protesters chose to continue their occupation of the Whitmore Administration Building after it was closed for business,” the statement said. “Meehan and Wooldridge expressed disappointment in students’ decision not to advance divestment discussion.”

Fifty students had returned to Whitmore by 10:30 Wednesday morning, calling for the university to make a concrete decision on divestment by the end of the day. They haven’t mapped out a specific course of action if the university fails to meet the demand, but Carvalho said students may continue their occupation of the building while also exploring other avenues to play a role in the conversation.