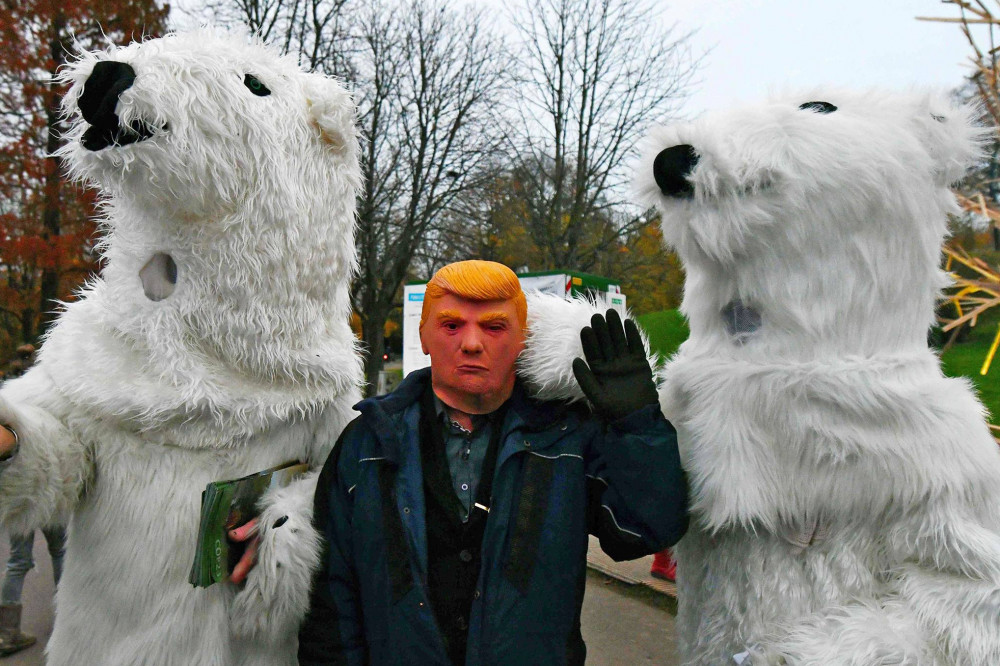 UN Climate Talks Wrap Up With World Leaving Trump Behind

Two weeks of international climate talks in Bonn made only incremental progress toward resolving disputes that have been lingering since the Paris Agreement of 2015. The main achievement may have been cementing a firebreak to prevent the Trump administration from torching the whole process.

The strategy is to assert a broad new leadership among nations big and small, to bolster their resolve with high-profile commitments from American cities and states, to muster corporations and financial institutions in an attempt to kickstart renewable energy and assist poor countries, and to leave Washington isolated on the world stage.

It’s a strategy pinned on the hopes—although diplomats would never put it so bluntly—that either Donald Trump will change his mind or that the United States will change its leader.

“The story of these climate talks was that however much Donald Trump wants to take us backward on climate change, the rest of the world—and the rest of the U.S.—is intent on moving forward,” said Nathaniel Keohane, vice president for global climate at the Environmental Defense Fund.

The United States, once a leader in the process, played only a desultory role at these talks—the first since Trump took office, pledged to abandon the Paris accord, refused to contribute any more money to the process, and renounced the pollution pledges of the Obama administration.

Despite all that, the administration was careful not to break the furniture in Bonn, as it continues to say it wants a seat at the table.

Usually a commanding presence at the UN climate talks, the U.S. sent only a rump delegation this year.

Green groups said on Friday that there were some signs of progress, as well as some disappointments. A number of European countries agreed to accelerate emissions cuts even before the year 2020, when compliance targets begin to take effect—an important step forward, according to Mohamed Adow of the relief group Christian Aid. The vexing question of how to pay for losses and damages from the climate changes already being experienced by many poor nations was kicked down the road again, for the umpteenth time—a disappointing outcome, to say the least, said Raijeli Nicole, the Pacific regional director for Oxfam.

At one event sponsored by the U.S. team, a defiant crowd packed the seats, jeered, and walked out in protest of its theme, which emphasized the role to be played, somehow, by fossil fuels in the energy mix.

That’s not a formula that plays well in this crowd. Indeed, one of the most striking developments on the sidelines of the conference was a spreading campaign to eliminate the use of coal entirely.

In a brief and perfunctory speech on Thursday, an American delegate cited recent U.S. progress in reducing emissions over the past decade but did not commit to any actions to maintain, let alone accelerate the trend, and did not clarify what kind of changes to the treaty might tempt the Trump administration to stay in it.

While the administration “intends to withdraw at the earliest opportunity, we remain open to the possibility of joining at a later date under terms more favorable to the American people,” said Judith G. Garber, an acting assistant secretary of state.

“Irrespective of our views on the Paris Agreement, the United States will continue to be a leader in clean energy and innovation, and we understand the need for transforming energy systems,” she went on. But she hedged that commitment, saying the Trump administration’s “guiding principles are universal access to affordable and reliable energy, and open, competitive markets that promote energy efficiency and energy security.”

Those code words soft-peddled the administration’s America-first, drill-baby-drill energy policy and the strong commitment to maintaining the use of coal and exploiting all available fossil fuels that are the hallmark of every Trump policy: its regulatory rollbacks, its revamping of the tax code, its budget priorities, its opening up of public lands, its refusal to recognize the full costs of carbon pollution, and the rejection of the worldwide scientific consensus by practically the entire Cabinet.

“Until they cease their efforts to leave Paris and actually invest in policies to fight climate impacts—today’s statement will be worth little more than the paper on which it was written,” said Jesse Young, a senior adviser for climate and energy at Oxfam America.

Still Not on Track to Meet Paris Goals

Despite the gains of the past few years in reducing emissions, there are signs that the United States is about to stall out, potentially cancelling out progress made by other leading polluters.

According to the independent group Climate Action Tracker, the improving outlook for emissions by China and India, based on actions already in place, means that the current path would lead to warming of 3.4 degrees Celsius by 2100. That’s a tad better than the group’s projections a year ago, but it’s far from reassuring.

The national pledges made at Paris would bring warming down further, but would still miss the goals of the accord, and any backsliding by the United States just makes matters worse.