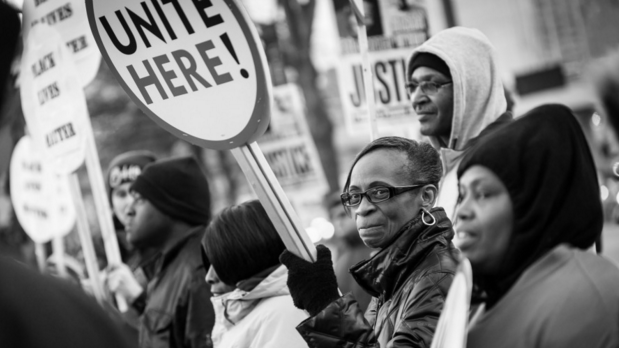 UN Experts Catalog Endless List Of Racial Discrimination In US

ABove Photo: Protesters hold signs during a Black Lives Matter action in Baltimore in 2015.  (Dorret/flickr/cc)

Having just completed an 11-day mission with visits to Washington D.C., Baltimore, Jackson, Miss., Chicago and New York City, the five-member Working Group of Experts on People of African Descent say they are “extremely concerned about the human rights situation of African Americans.”

The statement comes from their preliminary findings after hearing from state and federal officials, as well as individuals and civil society organizations.

“Despite substantial changes since the end of the enforcement of Jim Crow and the fight for civil rights, ideology ensuring the domination of one group over another continues to negatively impact the civil, political, economic, social, cultural, and environmental rights of African Americans today,” said human rights expert and working group head Mireille Fanon Mendes France.

“The persistent gap in almost all the human development indicators, such as life expectancy, income and wealth, level of education, housing, employment and labour, and even food security, among African Americans and the rest of the US population, reflects the level of structural discrimination that creates de facto barriers for people of African descent to fully exercise their human rights,” Mendes France’s statement continues.

Among the numerous problems noted in the findings is “the alarming levels of police brutality and excessive use of lethal force by law enforcement officials committed with impunity,” citing the killings of Eric Garner, Michael Brown, Tamir Rice, Walter Scott, Freddie Gray, and Laquan McDonald, as well as others.

“Contemporary police killings and the trauma it creates are reminiscent of the racial terror lynching of the past. Impunity for state violence has resulted in the current human rights crisis and must be addressed as a matter of urgency,” their statement reads.

Beyond other policing/incarceration racial disparities, including zero tolerance policies in schools that contribute to the school-to-prison pipeline, the group slams “the criminalization of poverty which disproportionately affects African Americans,” and calls out cities like Ferguson, Mo. where jails are often “debtors’ prisons.”

Their list goes on to note discriminatory voter ID laws; states’ rejection of Medicaid expansion, which serves as just one way in which African Americans’ realization of the right to health is thwarted; the existence of “food deserts” in many African American communities; schools’ insufficient covering of the period of enslavement and the “root causes of racial inequality and injustice… [thereby] contribut[ing] to the structural invisibility of African-Americans”; the housing crisis, high rates of homelessness and gentrification; the high unemployment rate of African Americans; and the environmental justice denied African Americans by highly polluting industries often disproportionately being placed in their communities.

The statement did applaud some steps taken to reduce racial inequalities, like the recent banning the use of solitary confinement for juveniles and low-level offenders in U.S. federal jails, the White House Initiative on Educational Excellence for African Americans aimed at “improving educational outcomes for African Americans of all ages,” and the abolition by several states of the death penalty.

For its recommendations, the group reiterates their calls from 2010 after their last visit to the country, including the need to establish a national human rights commission, for Congress to swiftly pass pending criminal justice reform bills including the End Racial Profiling Act, and the need for a national ban on the death penalty. It also states:

There is a profound need to acknowledge that the transatlantic slave trade was a crime against humanity and among the major sources and manifestations of racism, racial discrimination, xenophobia and related intolerance and that Africans and people of African descent were victims of these acts and continue to be victims of their consequences. Past injustices and crimes against African Americans need to be addressed with reparatory justice.

The group will deliver its final report to the United Nations Human Rights Council in September.