Above: Firefighters try to extinguish a fire engulfing warehouse of the World Food Programme in Hodeida, Yemen. (Reuters).

Yemeni pro-government forces have closed in on a rebel-held airport as they pressed ahead with a sweeping offensive on the key Red Sea port city of Hodeidah, despite warnings from aid agencies that the attack could jeopardize vital aid supplies to a country on the brink of famine.

The swift advance was an important early success for the Saudi-led coalition, which launched the operation in Hodeidah three days ago and says it can seize the city quickly enough to avoid interrupting flows of aid to millions facing starvation.

Coalition warplanes bombed Houthi rebel positions on Friday, while rebels said in an official statement that they fired a ballistic missile on fighters’ gathering, but gave no report of causalities.

The advance came after the UN security council rejected a move to demand an immediate end to the fighting around the strategic port.

The 15-strong body failed to agree to a statement calling on forces led by Saudi Arabia and the United Arab Emirates to implement a ceasefire, with the US and UK both voicing opposition to the text introduced by Sweden.

The council instead called for restraint and “urged all sides to uphold their obligations under international humanitarian law” in fighting for the city currently held by rebel Houthi forces.

The International Committee of the Red Cross warned on Friday that “more and more fighters” were arriving in Hodeidah, a city with a population of around 600,000 people. It described the streets of the city as “nearly empty” and that those living in Hodeidah were stocking up on fuel and food, fearing a possible long siege.

The battle has killed at least 139 fighters since it began on Wednesday, medical and military sources told Agence France-Presse.

Salim al-Shamiri, an employee of the Norwegian Refugee Council, escaped the city for the capital, Sana’a, by road with his family at the beginning of the assault but remains in touch with relatives still trapped in Hodeidah.

“I spoke to friends there an hour ago. They said that they could hear jets flying over the city today and the sound of airstrikes outside.

“My family told me that today people are being really cautious with no movement in the streets despite the fact that they should be out for Eid.”

David Miliband, the chief executive of the International Rescue Committee, challenged claims Hodeidah’s port and humanitarian aid could be protected during an attack, saying there was “a great danger of besiegement and long-term urban warfare”.

He told the BBC Radio 4 Today programme that the Saudi-led coalition, backing Yemen’s exiled government against the Houthi rebels, had repeatedly failed to make the progress it had predicted since it entered the war in 2015. “The immiseration of the Yemeni people is quite extraordinary: 22 million in need of humanitarian aid; 8 million at risk of starvation; 50,000 died last year from cholera or cholera-related diseases,” he said.

The impasse at the UN keeps open the option of a direct attack on the port for the Saudi-led coalition, but it is aware this could lead to a massive backlash from western governments and aid agencies.

Lana Nusseibeh, the UAE ambassador to the UN, insisted the military offensive was “a deliberate, carefully prepared and executed operation”.

Saudi Arabia’s UN ambassador, Abdallah al-Mouallimi, added: “Our desire in Hodeidah is not to infuriate the Houthis or to kill as many of them as we possibly can. To the contrary, we have allowed them safe passage to the north of the city if they want to drop their arms and leave.”

He challenged reports calling Hodeida “a lifeline to Yemen for humanitarian aid”, arguing there were nine ports in Yemen and two in Saudi Arabia that could be used to reach those in need.

The security council’s refusal to call for a ceasefire suggests the UK, US and France have accepted the Saudi and UAE claim that jeopardising aid flows is a justifiable risk if Houthi forces can be ousted from the city. 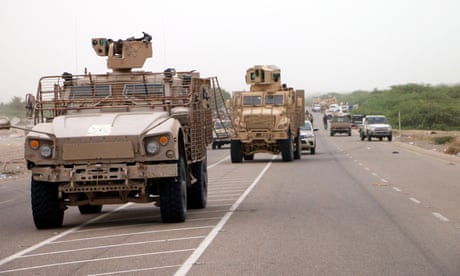 It will fuel claims, led by the former Conservative international development secretary Andrew Mitchell, that Britain is not acting as an honest broker on Yemen at the UN, but siding with Saudi Arabia because of the UK’s strong commercial links with the Gulf states.

The UK ambassador to the UN, Karen Pierce, denied this.

Critics of the Saudi-UAE assault say it has been timed to scupper the initiative of the UN special envoy for Yemen, Martin Griffiths, who was due to publish his peace plan on Monday and had been trying to negotiate a Houthi withdrawal from the port in return for the UN taking charge.

The UAE argues privately that capturing Hodeidah will deprive Houthis of $30m-$40m (£22.5m-£30m) in revenue and force them to negotiate. It also claims the port has been used to smuggle weapons from Iran, including missile parts used to fire into Saudi Arabia.

The UAE said the US had rejected its request for intelligence, minesweeping and airborne reconnaissance assets for the Hodeidah attack, but France had agreed to provide minesweeping support.

The French government stressed such operations would only be carried out after the port had been freed.

Stressing the threat to food supplies, Lise Grande, the UN humanitarian coordinator for Yemen, said: “Dozens of UN staff are in the city helping to deliver food, water and health services. We estimate that 600,000 civilians are in the city – many of whom are dependent on assistance to survive.”

Adama Dieng, the UN special adviser on the prevention of genocide, said: “Starvation of civilians as a method of war is a war crime and was condemned by the security council in resolution 2417 of 24 May 2018.

“It seems that the first test of this resolution is Yemen: Hodeidah is a lifeline for the delivery of aid and the coalition’s airstrikes can kill many more people over time through famine and hunger when damaging such civilian infrastructure.”