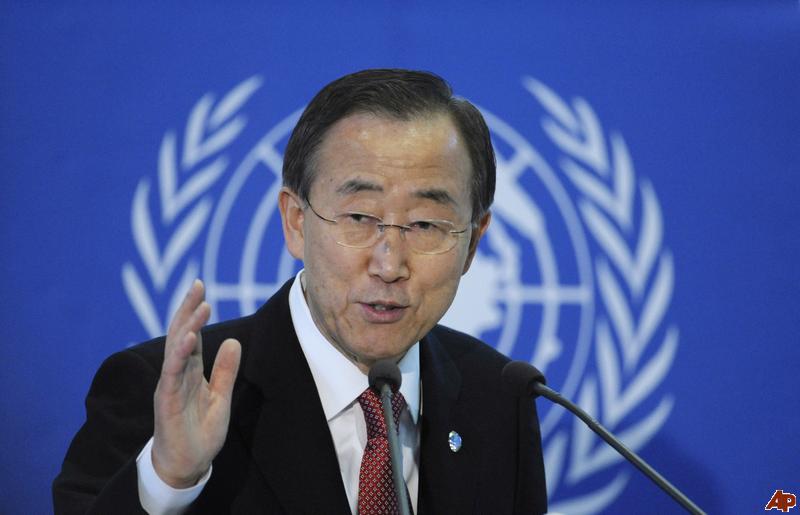 UNITED NATIONS — U.N. Secretary-General Ban Ki-moon on Tuesday warned that any “punitive” action taken against Syria for an alleged chemical weapons attack last month would be illegal without Security Council approval or a sound case for self-defense.

The U.S. and France have blamed Syrian President Bashar Assad’s regime for the alleged Aug. 21 attack and are considering military action in response. Such a strike would almost certainly occur without the approval of the Security Council, where Russia and China have consistently used their veto power to block action against Assad’s regime. The Obama administration argues that a chemical weapons attack cannot go unpunished because of the council’s inaction.

“As I have repeatedly said, the Security Council has primary responsibility for international peace and security,” Ban said at a news conference. “The use of force is lawful only when in exercise of self-defense in accordance with article 51 of the United Nations Charter and or when the Security Council approves such action.

He also warned that a military strike against Syria could unleash more turmoil and bloodshed in a crisis that has already killed more than 100,000 people.

“I take note of the argument for action to prevent a future use of chemical weapons. At the same time, we must consider the impact of any punitive measure on efforts to prevent further bloodshed and facilitate the political resolution of the conflict,” Ban said.

President Barack Obama received key support from leaders in Congress on Tuesday for a potential strike.

Ban did not blame any party for the alleged attack on a Damascus suburb, saying that “If confirmed, any use of chemical weapons by anyone under any circumstances will be a serious violation of international law and an outrageous war crime.”

“Whatever the source, this latest allegation should be as wakeup call for the international community,” Ban said.

He stressed that an ongoing investigation by U.N. chemical weapons experts “is uniquely placed to independently establish the facts in an objective and impartial manner.”

The U.S. government has said it has “high confidence” that there was a gas attack and it was launched by the Syrian government. U.S. officials have also questioned the ability of the U.N. team to properly investigate, saying the inspectors faced too many delays getting on the ground and only have a mandate to determine whether chemical weapons were used in the attack – not who was responsible.

Ban said biological samples collected by the inspectors will arrive in European labs for testing by Wednesday.