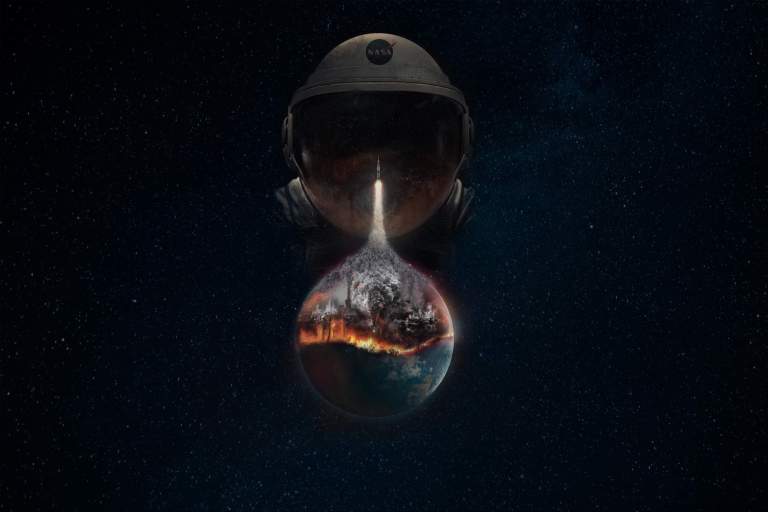 Due to Breaching of Planetary Boundaries.

A Landmark Report By The United Nations Concludes That ‘Global Collapse’ Is Becoming More Likely. But Was It Watered-Down Before Being Published?

When the United Nations published its 2022 ‘Global Assessment Report on Disaster Risk Reduction’ (GAR2022) in May, the world’s attention was on its grim verdict that the world was experiencing an accelerating trend of natural disasters and economic crises. But not a single media outlet picked up the biggest issue: the increasing probability of civilizational collapse.

Buried in the report, which was endorsed by UN Secretary-General António Guterres, is the finding that escalating synergies between disasters, economic vulnerabilities and ecosystem failures are escalating the risk of a “global collapse” scenario.

This stark conclusion appears to be the first time that the UN has issued a flagship global report finding that existing global policies are accelerating toward the collapse of human civilization. Yet somehow this urgent warning has remained unreported until now.

The report does not suggest that this outcome is inevitable or specify how close to this possibility we are. But it does confirm that, without radical change, that’s where the world is heading.

The UN’s Sustainable Development Goals and the Sendai Framework are a set of social, economic, legal, political and institutional measures to reduce “disaster risk and losses” – both involve targets to 2030 which the world is in danger of failing to meet.

That failure, however, is directly linked to the rate at which human activities are interfering with natural systems, in particular, ‘planetary boundaries’.

The planetary boundaries framework was developed by the Stockholm Resilience Centre in 2009 to provide what it calls a “science-based analysis of the risk that human perturbations will destabilize the Earth system at the planetary scale”. This framework identifies a range of nine key ecosystems which, if pushed passed a certain threshold, will dramatically reduce the “safe operating space” for human habitation.

The report notes that at least four of the nine planetary boundaries now seem to be operating outside the safe operating space.

While land system change and climate change are in a zone of “uncertainty with increasing risk” of overstepping the safe operating space, the report says, biochemical flows and ‘novel entities’ (“new engineered chemicals, materials or organisms and natural elements mobilized by human activity such as heavy metals”) have “far exceeded” that space.

However, the situation is likely to be worse than acknowledged in the UN’s report.

Byline Times revealed last summer that, according to Professor Will Steffen of the Stockholm Resilience Centre, two more planetary boundaries – ocean acidification and freshwater use – would probably by then also be “transgressed”, meaning that we are breaching six out of nine planetary boundaries. If we continue to cross boundaries at this rate, it is possible that we cross almost all of them before 2030.

According to the UN ‘s report, “the human material and ecological footprint is accelerating the rate of change. A potential impact when systemic risks become cascading disasters is that systems are at risk of collapse”.

Yet, although the risk of systemic collapse is discussed at different points in the report, the “global collapse” scenario did not receive extensive elaboration. Instead, the report makes reference to a separate ‘contributing paper’ published by the UN’s Office for Disaster Risk Reduction.

That paper, ‘Pandemics, Climate Extremes, Tipping Points and the Global Catastrophic Risk – How these Impact Global Targets’, offers an in-depth scenario analysis of global collapse risks based on how human activities are transgressing planetary boundaries.

The paper is authored by Thomas Cernev, a researcher at the University of Cambridge’s Centre for the Study of Existential Risk. It finds that the continuation of ‘business as usual’ and a failure to invoke drastic policy changes means that human civilization is moving inexorably toward collapse.

“From the scenario analysis… it is evident that in the absence of ambitious policy and near global adoption and successful implementation, the world continually tends towards the global collapse scenario,” it says.

Thomas Cernev’s paper identifies four potential pathways ahead. Yet only one of them, “stable Earth”, involves the achievement of global targets under the UN’s Sustainable Development Goals and Sendai Framework. All the others are heading toward collapse.

“In all of these scenarios except for ‘stable earth’, the achievement of global targets and accompanying frameworks is negatively impacted,” the report states. “Furthermore, in the absence of change, scenarios ‘Earth under uncertainty’ and ‘Earth under threat’ tend towards that of ‘global collapse’.”

The paper explains that, by adopting a systems analysis, it is possible to see how “the crossing of one planetary boundary systematically results in the crossing of others”. They are crucial to providing a ‘safe operating space’ for human societies to develop within a stable earth system, “with the passing of these boundaries subsequently, and most likely resulting in societal destabilization and potential GCR events”.

Global Catastrophic Risk (GCR) events are defined as those leading to more than 10 million fatalities or greater than $10 trillion in damages.

The paper’s worst-case global collapse scenario is described as the result of multiple planetary boundaries being breached, increasing the likelihood of GCR events that set in motion a sequence of economic and political breakdowns, which further drive ecological collapse processes.

In this scenario, “total societal collapse is a possibility”, the paper warns.

“This scenario presents a world where planetary boundaries have been extensively crossed, and if GCR events have not already occurred or are in the process of occurring, then their likelihood of doing so in the future is extreme,” the paper says. “In this scenario, global targets have most likely not been achieved, and the resulting collapse of society in this scenario means that the future achievement of any global targets is unlikely, and total societal collapse is a possibility. Disaster risk reduction has not been successful and disasters are common, with disaster events as well as GCR events such as pandemics increasing.”

It goes on to suggest that, in such a scenario, without policy changes designed to mitigate risks and make the global system more resilient and adaptable, “the crossing of planetary boundaries is likely to exacerbate GCR risk, with large and complex environmental feedback loops leading to further environmental and social collapse” and that “depending on the extent of the crossing of the planetary boundaries and the severity of any GCR events that may have occurred, policy interventions that are not drastic are unlikely to improve society and a reactive policy approach will need to be taken”.

That scenario leads to extremely limited international cooperation, in turn creating a higher risk of global or environmental conflict as the environment degrades, “with potential forced migrations of people from uninhabitable areas that in turn has the potential to heighten GCR by making events such as a pandemic or nuclear war more likely”.

While the global collapse scenario represents the worst-case, it is difficult to avoid the conclusion that we can see signs of it emerging today. Of greater concern is that the two other scenarios explored by the paper still tend toward this worst-case scenario.

In the earth under threat scenario, “planetary boundaries have been crossed past a safe limit, or there is a large degree of uncertainty as to humanity’s position relative to the boundaries with strong suspicion and evidence of some if not all having been crossed”. We appear to be either very close to reaching this point, or have already reached it.

The UN paper adds: “Whilst GCR is low and GCR events are unlikely to occur, the complex feedback loops that operate between the planetary boundaries are likely to increase the likelihood of GCR events occurring in the near future.”

The paper argues that political and global instability will be exacerbated by “a quickly degrading environment” which could further “drive conflict and hinder future progress towards achieving global targets. In this scenario, the world is on a path towards a global collapse scenario, where GCR events are occurring unless considerable preventive and reactive policy interventions that are ambitious are globally adopted and successfully undertaken”.

Even in the Earth under uncertainty scenario, where “planetary boundaries have not been extensively crossed, or there is a high level of uncertainty as to humanity’s position relative to the boundary”, we would still be in a position where “GCR risk is high, with the likelihood of a GCR event being extreme or a GCR event having already occurred or in the process of occurring”.

Despite the potential to achieve some global targets and international cooperation, the paper concludes that only further ambitious policy changes can “ensure that development targets are achieved and the world is not pushed towards a Global Collapse scenario”.

The paper states: “The scenario analysis undertaken illustrates a dangerous tendency for the world to tend towards the Global Collapse scenario,”

Although “reactive” policies are necessary to mitigate existing risks, the paper calls for a focus on “preventive” policies to build greater system resilience and to avoid further crossing planetary boundaries.

In particular, it calls for “the creation of a planetary boundaries goal” in the next version of the SDGs adopted after 2030, along with “the incorporation of GCR into the targets”.

As I had found in 2017 as a researcher at Anglia Ruskin University’s Global Sustainability Institute, the process of global societal collapse is likely to accelerate as a self-reinforcing feedback loop between human system destabilization (HSD) and earth system disruption (ESD).

In this feedback loop, earth system disruptions – in this case, triggered by breaching of planetary boundaries – destabilize social, political and economic institutions. This, in turn, inhibits successful policy responses to ESD, leaving the planet vulnerable to further ESD outbreaks.

The result is a feedback effect in which HSD and ESD occur in an amplifying cycle with the potential to culminate in a dramatic loss of complexity in the human system – what might be defined as a collapse.

The UN Global Assessment Report, and its contributing paper by Thomas Cernev, offer scenarios that are consistent with this process – but it is not clear whether any of these scenarios have actually begun, only that currently the world is tending dangerously toward them.

No precise timescales are identified in the documents and neither the UN nor Cernev have responded to requests for comment from Byline Times.

But there are reasons to suspect that a collapse process has already started, even if it is still possible to rein in.

A senior advisor to the UN Office for Disaster Risk Reduction and contributor to the Global Assessment Report who spoke to Byline Times on condition of anonymity, claims that the GAR2022 was watered-down before public release.

The source said that the world had “passed a point of no return” and “I don’t feel that this is being properly represented in UN or media as of now”.

“The GAR2022 is an eviscerated skeleton of what was included in earlier drafts,” they claimed.

The UN GAR2022 is a landmark document. It is the first time that the United Nations has clearly underscored the impending risk of “total societal collapse” if the human system continues to cross the planetary boundaries critical to maintaining a safe operating space for the earth system.

Yet, despite this urgent warning, not only has it fallen on deaf ears, the UN itself appears to have diluted its own findings. Like the fictional film Don’t Look Up, we are more concerned with celebrity gossip and political scandals, seemingly unable – or unwilling – to confront the most important challenge that now faces us as a species.

Either way, these UN documents show that recognizing the risk of collapse is not about doom-mongering, but about understanding risks so we can make better choices and avoid worst-case outcomes. As the report acknowledges, there is still much that can be done. But the time for action is not after 2030. It’s now.