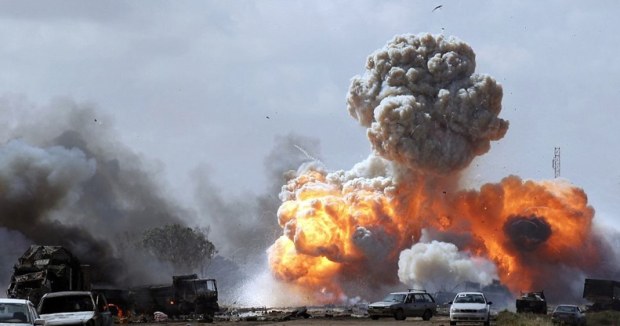 UNAC Statement On Bombing Of Libya

Note: UNAC fails to mention that there are more than two candidates for President. We urge people to educate themselves about all of the presidential candidates, including Jill Stein of the Green Party and Gary Johnson of the Libertarian Party.

(August 7, 2016) The recent bombing of Libya is a continuation of the seven months long campaign of bombing carried out five years ago.  At that time the U.S. and its NATO allies succeeded in destroying that country’s government and assassinating President Gaddafi. Prior to that attack, Libya was the most prosperous country in Africa, with the highest standard of living and health care, education and other social benefits for its people. Today it is a failed state, a wasteland that is bleeding refugees to Europe, Tunisia and other countries seeking to escape the horror that the U.S. and NATO have created. The most recent bombing, ostensibly to combat ISIS, will not bring security to the people of Libya, but will continue the destruction of that country and cause more civilian casualties and refugees.

One of the areas that ISIS in Libya controls is the city of Sirte, a port city surrounded by the country’s main oil fields and from which Libya’s oil is transported. It is likely that the control of Libya’s oil is part of the equation leading to the renewed U.S. bombing.

The development of ISIS itself is the direct result of U.S policy in the entire region. The U.S. has bombed one country after another, leaving failed states that become breeding grounds for groups like al-Qaida and ISIS. With financial support and weapons coming largely from countries allied with the U.S., like Saudi Arabia and Qatar, and with the introduction of foreign fighters and mercenaries, the extremist organizations have been able to take territory and resources, leading to more bombing by the U.S. The United States is continuing a 40-year-old policy of using jihadist groups to destroy secular governments in the region. They are the “boots on the ground” of U.S. imperialism.

This cycle of destruction can only stop by bringing all U.S. forces home and ending bombing and all interventions against Libya and all other countries.

President Obama claims the right to bomb Libya because of the Authorization for Use of Military Force legislation passed by Congress in 2001. Since that time, Presidents Bush and Obama have used that legislation to justify 37 foreign interventions in 14 different countries. It is justification for a never-ending war.  During this period, extremist groups like al-Qaida and ISIS have come into being in country after country where they did not exist before.

This escalation is not only being played out in Libya, but the U.S. has sent more forces into the failed state of Iraq. It has recently admitted to having fighters in Yemen. It has once again extended its deadline for withdrawal from Afghanistan and it continues to bomb Syria. At the same time, both the U.S. and NATO are stationing more troops in Eastern Europe, closer and closer to Russia, bringing the risk of a nuclear war that would threaten the entire planet.

During this election period, we are presented with two pro-war candidates, despite the fact that all polls show a great majority of the U.S. people do not want war. The issues of U.S. wars and the terrible devastation they are causing for millions are barely discussed during this election period. It is no accident that the announced bombing of Libya took place in the midst of election fervor, when most of the public and much of the Left are distracted. The elections are not a means to bring peace.  We must continue to build an independent antiwar movement that makes our voices heard during and after the spectacle of the elections.

END THE ATTACKS ON LIBYA!

NO TO ENDLESS WARS AT HOME & ABROAD!

MONEY FOR PEOPLE, NOT THE PENTAGON!