By Staff, www.PopularResistance.org
May 2, 2017
| Educate!
Unarmed 15 Year Old Killed By Police In Texas2017-05-022017-05-02https://popularresistance-uploads.s3.amazonaws.com/uploads/2017/12/popres-shorter.pngPopularResistance.Orghttps://popularresistance-uploads.s3.amazonaws.com/uploads/2017/05/Jordan-Edwards-family.-Father-Odell-Edwards-wipes-away-tears-as-he-sits-with-his-wife-Charmaine-Edwards-listening-to-their-attorney-Lee-Merritt-talking-about-the-death-of-their-son.-GUY-REYNOLDS-for-AP-150x100.jpg200px200px

Jordan Edwards family. His father, Odell Edwards, wipes away tears as he sits with his wife, Charmaine Edwards, listening to their attorney Lee Merritt talking about the death of their son. (GUY REYNOLDS for AP)

Police Officer is Fired, Video of Incident Not Yet Released, Funeral Saturday, Family Calls for Murder Charges, Asks for No Protests

On Monday, the police department of the Dallas suburb of Balch Springs, Texas, changed its story on the shooting of 15-year-old Jordan Edwards, who was killed by a police officer on Saturday. Edwards was a a freshman at Mesquite High School. The story changed after Chief Jonathan Haber watched body-cam footage of the shooting. The video tape has not been released and police say a decision on its release will be made by the police and prosecutor. 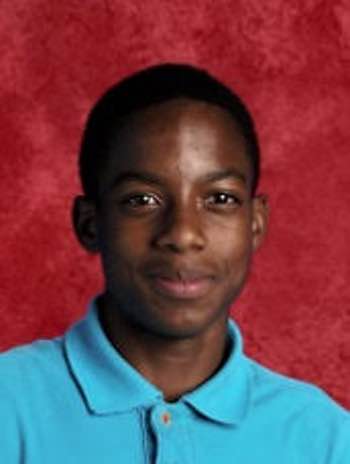 The police released a statement that claimed officers were investigating reports of a shooting and when they went outside they saw a car going in reverse down a street and despite multiple commands it would not stop. The vehicle got on the main road and continued moving forward. Officer Roy Oliver fired his rifle into a car of unarmed teens Saturday night as they drove away, fatally striking Jordan Edwards in the head. Jordan’s brothers were also in the car. Originally, police had said the car was aggressively backing up toward officers.

The family claims that the boys heard shots and decided to leave the party. As they were leaving they heard someone swear three times and then a gun was shot killing Edwards who was sitting in the front passenger seat.

The Dallas County Sheriff’s Department and district attorney are investigating the officer involved in the shooting. The Dallas Morning News reports that the Balch Springs police Tuesday fired Oliver who fatally shot Jordan Edwards. Oliver had been with the department since 2001.

The department said Oliver violated several policies but would not say which ones. “It did not meet our core values,” Haber told the media of his officer’s actions. Officers in the town are discouraged from firing at moving vehicles even when a car is headed towards them, with guidelines saying that cops should “attempt to move out of its path, if possible, instead of discharging a firearm at it or any of its occupants.”

Jordan’s family expressed gratitude that Oliver was fired but said in a statement “there remains a long road ahead” for them and justice.

“Over the past 24 hours Chief Haber has made commendable strides toward justice. However, there remains a long road ahead. We anxiously await this officer’s … arrest for the crime of murder,” the statement said. “The magnitude of his horrible actions cannot be overstated. We fully expect an equivalent response from those responsible for investigating and punishing the crime. We also know that although his actions were the most wicked and consequential, he was not the only officer responsible for dreadful behavior that evening.

“After Jordan’s two brothers, Vidal and Kevon, along with their two friends, were forced to experience this tragedy up close as occupants of the car, they were immediately treated as common criminals by other officers; manhandled, intimidated and arrested [Jordan’s older brother was held overnight], while their brother lay dying in the front seat. The officers who extended this nightmare for those children ought to be properly reprimanded as well. Our family is working hard to deal with both the loss of our beloved Jordan and the lingering trauma it has caused our boys.”

The high school freshman’s family have rallied behind the phrase “Justice for Jordan” since the shooting, where Oliver responded with a second officer.

News outlets report that Edwards was a good student and football player who brought a lot of positive feelings to those around him. He was ery close to his family and fellow students, who have created a memorial around his locker. The family asked the public to refrain from protests and marches in Jordan’s name as they prepare for his funeral, which is scheduled for this Saturday. A YouCaring account has been set up for those who want to financially help the family.