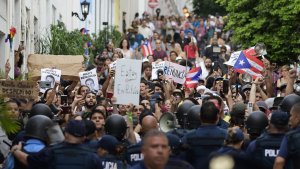 Uncertainty In Puerto Rico After Protests Against Corrupt Governor

Unrest prevails in Puerto Rico following long days of protests against Governor Ricardo Rosello, whose resignation is being demanded by the population.

A third day of mass demonstrations intensified calling for his immediate resignation and extended into Tuesday morning, this time marked by violence after the police tear-gassed protestors.

A group of young people responded by burning waste containers in the streets of the city, while several buildings were painted with messages urging Rosello to leave the post. The governor’s resignation is demanded due to corruption in public funds, which resulted in the arrest of six officials and contractors close to the governor on behalf of United States federal authorities last week. This comes as media sources have leaked 889 pages of an electronic chat in which the governor and his advisors dismissively mock the population and several minority sectors.

In the tense situation, Puerto Rico police chief Henry Escalera said, “we are going to defend democracy no matter how.” This was taken as willingness of the authorities to increase repression against protestors amidst the country’s political and social crisis.

The police have not given a report of the number of wounded and arrested civilians yet, but they reveal that 14 of their agents have been injured by protestors.

San Juan Mayor Carmen Yulin Cruz said Old San Juan was fine in general following the demonstrations carried out in the city, seat of colonial government and focus of the protests. She added there were some messages written on the building of the Department of State, several cars with broken glass and some broken windows in stores situated in front of the main square.

More demonstrations are expected against Rosello given the uncertainty expressed by economic sectors in the country, while he refuses to leave the post until his term expires on January 2021.

Local artists such as vocalist Rene Perez (Residente) and rap singer Bad Bunny are organizing a protest to demand the governor’s resignation on Wednesday.

Monday’s demonstrations were concentrated in front of the Legislative Assembly and in the surroundings of La Fortaleza, the governor’s building. The two protests converged in the old area of the city amidst the largest action against a Puerto Rican governor in the last 60 years.

Shouting “Ricky Resign,” “Ricky Go Away,” and “Ricky, if you don’t quit we’ll take you out,” protests continued increasing until the police started to launch tear gas bombs into the protestors. The violence calmed down at daybreak on Tuesday, while new demonstrations were being announced.