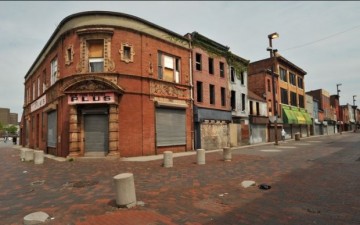 Above: The Old Town Mall in Baltimore, once a thriving commercial district has stood dilapidated for more than 45 years.

Maryland Governor Larry Hogan was very quick to call in the National Guard and police from all over the state in response to the urban revolt in Baltimore; he went to churches to show how much he cared and promised to do something about the inequality between rich and poor, white and black in Baltimore. But his first act now that the revolt has quieted was to cut school funding. Baltimore school’s have been historically underfunded, many community schools have been closed and students struggle to get the opportunities in education that wealthy suburbs get.

Hogan cut $11.6 million that would have gone to Baltimore schools in favor of funding state pensions. To make matters worse the cut in education funding follows the state’s approval of the $30 million construction of a youth jail in Baltimore earlier this week. The proposed youth jail has been strongly opposed by Baltimore residents as they see the government prioritizing jails over education, recreation centers and community needs. Hogan should not be surprised if there are additional urban revolts in Baltimore. His actions almost assure it. But, his actions are not alone, there have been decades of economic injustice in Baltimore and cities across the country. And, they are part a pattern of race-based injustice that has occurred throughout US history.

The #BaltimoreUprising isn’t just about one death. Years of systemic neglect have left people with shorter lives, poor educations, and few employment opportunities.

On April 12, Baltimore police arrested Freddie Gray. His hands were cuffed, his legs were shackled, and he was placed into the back of a police van with no safety restraint or seat belt. When Gray arrived at a nearby city jail his spine was broken. He died from his injuries a week later.

Since Gray’s death thousands of people in Baltimore have filled the streets in protest. Maryland’s governor declared a state of emergency, issued a city-wide curfew, and called in the National Guard. Meanwhile, the #BaltimoreUprising movement has dominated Twitter feeds, front pages, and evening news reports.

Activists point out that this movement is about much more than any single incident. Sandtown-Winchester, Gray’s neighborhood on the west side of Baltimore, is a community whose residents live with police violence and institutional racism every day.

Yes, the suspicious circumstances surrounding Gray’s death triggered these protests. But, the people of #BaltimoreUprising want more than just the police officers involved be held accountable for Gray’s death. They are demanding a change to the system that caused it.

In 1969, as the civil rights movement raged and black leaders were assassinated, BB King, who died this week, explains the history of being black in America in “Why I Sing the Blues” . .