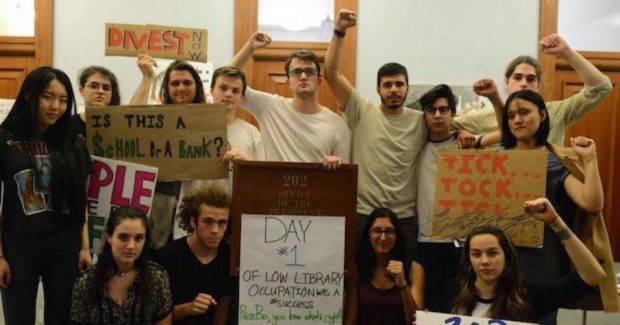 Above Photo: Columbia students spent the night in administrative buildings for the second week of sit-ins. (Photo: Columbia Divest for Climate Justice)

Students at three major American universities are digging in for a series of prolonged sit-ins and risking suspension and arrest to demand that their schools divest from fossil fuels.

NYU’s protest, which launched Monday, saw students with NYU Divest occupying the administrative elevator and lobby of the school’s Bobst Library to demand the Board of Trustees holds a vote on divestment at its next meeting and allows the group to give them a presentation.

All three occupations continued on Tuesday as students spent the night in administrative buildings, even as Columbia officials threatened to suspend the seven remaining protesters occupying Low Library.

“I am sitting in because I see climate justice as a human rights issue,” Nikita Perumal, an organizer with Columbia Divest for Climate Justice (CDCJ), told Salon. “It is immoral that Columbia actively profits from an industry that threatens the well-being of vulnerable communities around the world.”

Other organizers said they would not leave until Columbia’s president Lee Bollinger agrees to recommend to the Board of Trustees that the school divest its $9.2 billion endowment from the top 200 publicly-traded fossil fuel companies.

“Suspension threats are the administration’s way of bullying us out of Low Library,” CDCJ organizer Lucas Zeppetello, who is participating in the sit-in, said Monday. “They seek to drain our morale and demoralize the group. This strategy has failed largely due to the support we have received from on campus groups dedicated to peaceful protest.”

In fact, more than 60 professors, staff, and other faculty members from Columbia and Barnard (the woman’s liberal arts college affiliated with Columbia) published a letter of support for the students on Monday, calling on Bollinger to “directly and immediately” engage with the protesters.

Iliana Salazar-Dodge, another CDCJ organizer, told Salon that the risk of suspension “is minor in comparison to the danger that people are facing when they confront the fossil fuel industry and private interests around the globe.”

“I am willing to take this stand because climate change is affecting so many people, especially communities of color, and it is hypocritical for Columbia to invest in companies that profit off of destruction and death,” she said.

Meanwhile, Democratic presidential candidate Bernie Sanders, also in town this week Tuesday’s New York primary, expressed his support for the action on Twitter, writing, “Let us stand in solidarity with the students at Columbia and NYU for demanding their schools divest from fossil fuels” and adding the hashtag #KeepItInTheGround, which has become a rallying cry of the climate movement.

In Amherst, 34 students calling for divestment were arrested last week on the fifth day of their sit-in. Despite that, they have vowed to resume their protest on Tuesday.

Across the world, students at a handful of Australian universities held similar actions—including one that could be described as “cheeky“—calling on their school administrations to drop investments in fossil fuels.