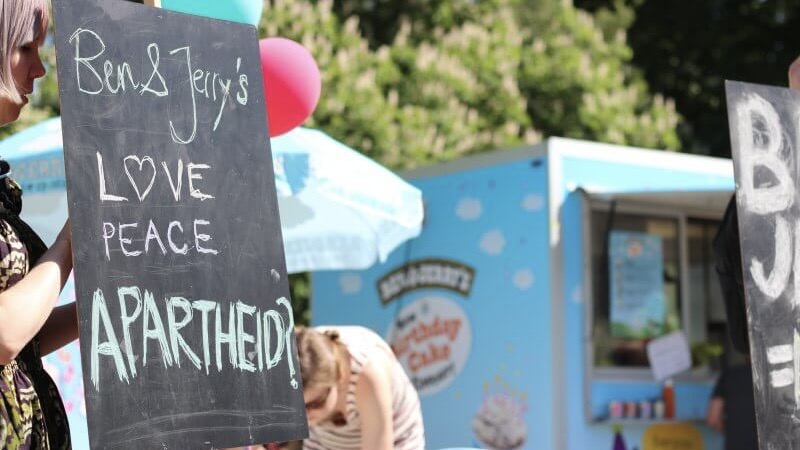 After a year of backlash, legal challenges, and Zionist lobbying, Ben and Jerry’s products will return to illegal settlements, in direct contradiction of the company’s will.

Unilever has sold Ben and Jerry’s Israeli business to its Israeli licensee, one year after the American ice cream company announced that it would end sales in the occupied Palestinian territories (oPt). After a year of backlash, legal challenges, and Zionist lobbying, Ben and Jerry’s products will return to illegal settlements, in direct contradiction of the company’s will.

Ben and Jerry’s July 2021 decision to terminate sales in the oPt– where the Israeli state enacts a system of apartheid– was welcomed by the Boycott, Divestment, and Sanctions (BDS) campaign, a grassroots civil society movement that seeks to place economic and diplomatic pressure on Israel, in order to hold it accountable for its violation of human rights. The 2021 statement, which expressed Ben and Jerry’s commitment to “stay in Israel through a different arrangement,” reveals the tensions between Ben and Jerry’s independent board and their parent company. According to Anuradha Mittal, who spoke to NBC News, the original statement intended by Ben and Jerry’s made no reference to continued operations in Israel, and the clause was included unilaterally by Unilever in July.

Following Ben and Jerry’s 2021 decision, Israeli Prime Minister Naftali Bennett threatened the company of “severe consequences,” and Unilever faced economic pushback by lawmakers in various US States. Unilever’s latest move is a function of Israeli and Zionist pressure: the corporation’s statement reveals that the decision-making process “included extensive consultation over several months, including with the Israeli Government.” The decision also included significant input from tycoon and investor Nelson Peltz, who will be joining Unilever’s board. Moreover, the Anti-Defamation League (ADL), an American Zionist organization, revealed that it “has been in touch with Unilever, the Government of Israel, and others to correct the misguided move by Ben and Jerry’s independent leadership.” According to Adalah Justice Project, a US-based campaign for Palestinian rights, the “ADL “used its bullying power” in what it called “a calculated run around to undermine [Ben and Jerry’s] wishes.”

Ben and Jerry’s tweeted that they “do not agree” with the decision taken by Unilever, clarifying that their “company will no longer profit from Ben & Jerry’s in Israel.” They went on to assert, “we continue to believe it is inconsistent with Ben & Jerry’s values for our ice cream to be sold in the Occupied Palestinian Territory.”

According to Palestinian Liberation Organization (PLO) official Wasel Abu Yousef, who spoke to Reuters about the decision, “the return of Ben and Jerry’s to Israeli settlements, which were built on Palestinian land, exposes it to international legal accountability and its name will be on the United Nations blacklist of companies operating in settlements.” Yair Lapid, who will be assuming the role of Prime Minister of Israel until the upcoming Knesset elections in November, called Unilever’s move “a victory.” Lapid had been in conversation with Unilever’s leadership days before the decision, indicating the Israeli government’s pressure on the corporation’s decision.

Recent years have seen a rise in illegal settlement building across the oPt, with settlers numbering at nearly half a million. In addition to the Israel’s apartheid practices – which are classified as a crime against humanity – Israel’s settlements violate international humanitarian law, namely Article 49 of the Fourth Geneva Convention. UN assessments reveal that over 12,000 Palestinians have been forcefully displaced as a result of home demolitions since 2009. Illegal settlements, legitimized by the companies that operate in them, continue to drive the ongoing ethnic cleansing of Palestinians.