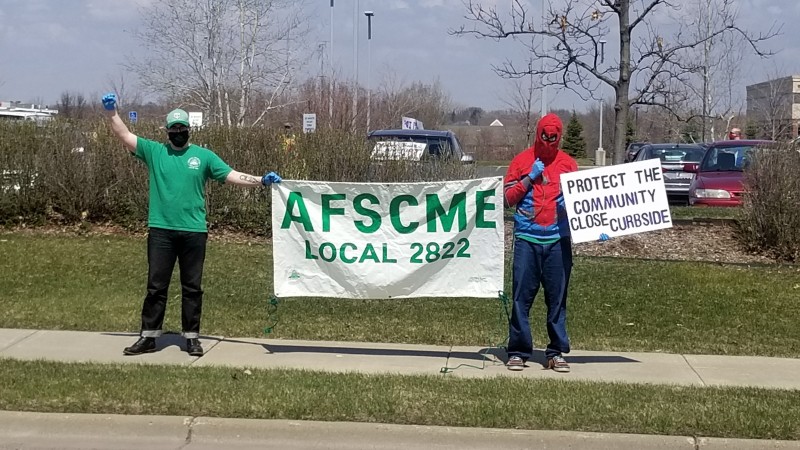 While managers patted each other on the back and reconnected after two years of hiding at home, union leaders confronted public officials with signs and informational flyers. Workers are demanding the bosses stop targeting union stewards and activists.

The first was Irish Gauna, a single African American mother of five who was fired in late January for allegedly violating the county’s COVID testing policy. Irish, a rank-and-file leader, became active in the union after organizing Black women and others in a successful campaign to get paid leave for parents and caregivers during the COVID pandemic. Irish spoke publicly throughout the union’s recent contract negotiations, including at a press conference in early January about why workers voted to strike.

The second was Sue Olson, a 31-year employee at Hennepin County who had no issues at work until she became the only union steward for support staff in the probation department. In the past two months Olson received a three-week suspension without pay for petty issues, including reporting a broken door to facilities instead of her supervisor. The disciplines came shortly after Olson informed human relations that her supervisor was over three months late in issuing raises. Most of the retaliation stems from manager Jen Belde.

The third was DJ Hooker, an executive boardmember of AFSCME 2822, and an associate librarian at North Regional Library. DJ Hooker is a beloved community activist as well. Hooker was issued a written reprimand and one day suspension without pay after a white manager accused them of “reverse racism.” The accusation was related to a conversation with manager Michael Boe where Hooker asserted the need to hire more Black and Latino workers at their library. North Regional serves a predominately African American community on the North Side of Minneapolis. Boss Boe asserted that Hooker’s advocacy for a diverse workforce created a hostile work environment for their white co-workers. None of Hookers co-workers filed any complaints about the incident.

The union members declared that these acts of harassment, intimidation and retaliation must end. They called on Hennepin County commissioners to “Stop the retaliation against union activists now! End racism, sexism, ageism at work!”