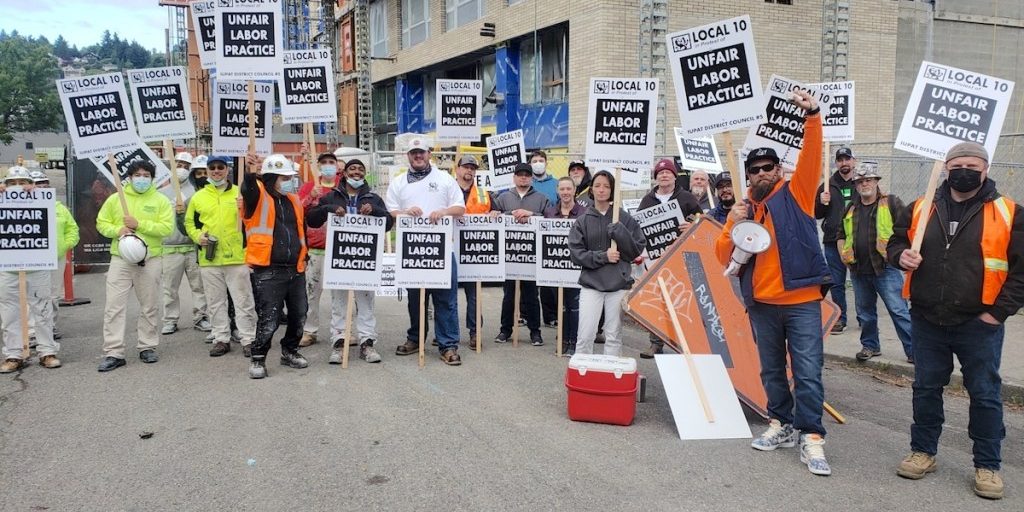 Union Painters Are Primed For A ‘Summer Of Chaos’

Above Photo: Thanks to solidarity from other union workers, painters striking for fair pay, like those above at SW 17th, have shut down jobs two Fridays in a row. Eryn Byram.

At 5:45 a.m. Friday, May 21, painters started assembling outside under-reconstruction Madison High School in Northeast Portland, and picked up picket signs instead of paint sprayers. For the first time in over 40 years, members of Painters Local 10 were on strike. On the picket line were the 21 members scheduled to work there that day plus others who came to back them up. Painters District Council 5 field rep Scott Oldham says at first there was fear, not knowing what to expect. But when other union trades started to arrive in twos and threes, the mood shifted.

“People from each crew would walk forward and say, ‘Hey, we’re with Local 16, and we respect what you’re doing. We absolutely will not be crossing the line today,” Oldham says. “Next time it could be me,” some workers said.

Within hours, an estimated 120 members of over a dozen other unions had honored the strike picket line, giving up a day’s wages to show solidarity with the union brothers and sisters of the International Union of Painters and Allied Trades.

The target of that day’s strike was Williamsen and Bleid (also known as Portland Coatings) but the fight is much bigger than that. Williamsen and Bleid is one of 10 painting contractors that make up the Signatory Painting Contractors Organization (SPCO), a local contractor group that employs about 440 of Local 10’s 730 members (members also work in shipyards, for wall and ceiling contractors, and for independent paint contractors). Last year, Local 10 signed a historic collective bargaining agreement with SPCO that raised wages $2.62 an hour for commercial and residential work. But in light of the economic uncertainty of the unfolding pandemic, wage increases for the agreement’s second and third year were left up to further negotiations, what’s known as a “wage reopener” in union contract jargon.

Year 2’s raise was scheduled for April 1. But the two sides couldn’t agree on how much. SPCO is offering 25 cents an hour. Local 10 says that’s unacceptable.

With journeyman painters now at $26.56 an hour for commercial work, a 25 cent raise is less than 1%. Members would actually lose buying power to inflation, backsliding from what they won last July. Worse yet, health insurance rates rise 10 cents an hour July 1 through the union-affiliated multi-employer health trust. Under the employer offer, that 10 cents would come out of their 25 cent raise.

Oldham says SPCO argued in the wage reopener negotiations that there’s still too much uncertainty in the construction forecast, and that last year’s biggest-ever $2.62 an hour raise should be enough for three years. But Local 10 views that Year 1 increase as a long overdue first-stage catchup raise after 40 years of falling behind other painters union locals, other trades, and even inflation itself.

The generation that fell behind

For the commercial and residential painters employed by SPCO contractors, the big raise amounted to a 10.9% increase. But for three decades before that, Oldham says, increases averaged less than 2% a year. In recession years, there were sometimes no raises at all, and there were even two years when hourly wages fell because of health insurance cost increases. Union painters were gradually pinched by inflation as their real-life purchasing power fell by more than 10%.

The squeeze has left commercial painters the lowest-paid among the local building trades union craftworkers by more than $5 an hour.

In fact, Local 10’s long-term wage slippage has been so severe that—though their union benefits are far superior—the union wage is often insufficient to entice non-union painters to jump to the union side of the industry.

Yet straight through the pandemic, construction has continued to boom, members are at full employment, and Local 10 sometimes struggles to supply enough labor to contractors.

Calling employers’ bluff about concerns of continued economic uncertainty, Local 10 asked SPCO to divulge all projects planned through March 31, 2022. But SPCO members, including Williamsen and Bleid, mostly declined to provide the requested information. On May 18, Local 10 filed unfair labor practice charges with the National Labor Relations Board against Williamsen and Bleid and two other SPCO members—W.E. Given and Siegner & Company—saying their refusal to provide the information is an illegal failure to bargain in good faith. Technically, that was the grounds for the May 21 strike, and why the picket signs said “Unfair Labor Practice.”

Outside Madison High School, picketers stayed until 9 a.m., but because all nonstriking union workers honored the picket line and left the job, work never started for the day, to the chagrin of general contractor Fortis Construction.

But the strike wasn’t a one-off. It was a shot across the bow, a warm-up exercise amid a week-long mail-in strike vote by Local 10 members who work under the SPCO contract. On May 24, ballots were counted: 95% said they’re prepared to strike.

The same day, delegates at the monthly meeting of the Northwest Oregon Labor Council, AFL-CIO, approved unanimously a resolution put forward by the stagehands union IATSE Local 28—to stand in solidarity with Local 10 members.

On May 28, painters struck Williamsen and Bleid again, this time at a six-story downtown apartment project run by Hoffman Construction, a project workers say was far behind schedule. Many contractors at the Southwest 17th and Taylor site were non-union, but the job slowed to a virtual halt anyway. This time, solidarity from just two union members in Operating Engineers Local 701 played a key role shutting down the job. Union carpenters, laborers and cement masons honored the painters’ surprise picket line, but some non-union workers were willing to cross. Strikers say non-union bricklayers crossed picket lines, only to come out a little while later when they made a discovery: Without operating engineers to run the crane or the lift, they’d be faced with carrying brick loads up multiple stories. After a lengthy powwow on a nearby corner, a large crew of non-union bricklayers left at 7:30 a.m. And one of the operating engineers returned to the picket line, to bring strikers cases of bottled water.

“Seeing everybody respect the picket lines showed that people believe in unions,” Oldham told the Labor Press. “It showed that the saying, ‘An injury to one is an injury to all,’ still rings true. Our members took comfort in knowing that union members from all crafts believe in that.”

After the first strike, Local 10 invited SPCO to meet again May 27, but the employer group declined. The two sides next meet on June 15 with the help of a federal mediator.

“At this time, we believe that all of the labor activity on job sites are informational pickets,” Siegner wrote.

Oldham hopes employers will sweeten their offer when the two sides next meet, but says so far SPCO seems to have dug in at 25 cents. If they stick to that, the Local 10 strike committee is planning a series of rolling one-day strikes, without warning to employers, as members build confidence toward a full shutdown of all paint contractors.

They’re calling it “Summer of Chaos 2021,” and the slogan is already appearing on stickers and T-shirts Local 10 is giving out to members, alongside an image of the ominous-looking breathing apparatus painters must sometimes use.

For other building trades workers, a season of strikes could offer a chance to flex the muscle of solidarity … and some unplanned three-day weekends to enjoy the summer weather.