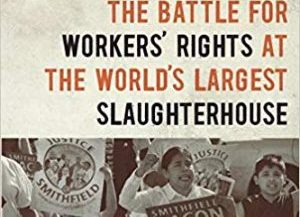 Capitalism has many victims, but few fare as badly as slaughterhouse workers. Every day, meatpacking workers risk life and limb to provide cheap meat for consumers. Yet, meatpacking workers are not glorified by the state. They are not given medals for bravery or celebrated in our movies, books, or video games. Instead, they are often vilified. Political scientist Timothy Pachirat once described slaughterhouse work as a form of labor “considered morally and physically repellent by the vast majority of society that is sequestered from view rather than eliminated or transformed.”1

Yet, behind these walls lie some of labor’s greatest triumphs. Lynn Waltz documents one such triumph in her book Hog Wild: The Battle for Workers’ Rights at the World’s Largest Slaughterhouse. In the tradition of Upton Sinclair’s The Jungle, Waltz describes how meatpacking workers successfully established a union at the Tar Heel slaughterhouse in North Carolina. While Waltz focuses on the labor struggle at the Tar Heel plant, the success of the workers there in unionizing provides important lessons for future unionization efforts.

Meatpacking was once considered a good job. From the Second World War through the 1950s, “packinghouse wages rose to 20 percent above average manufacturing wages.”2 Strong unions such as the Packing Workers Organizing Committee ensured living wages and decent working conditions for slaughterhouse workers. This changed during the 1960s. To increase their profits, meatpacking companies shut down unionized, urban slaughterhouses and built new ones in the countryside where unions were weak and automation was used to lower a company’s labor force. This resulted in great gains for the meatpacking giants in the form of reduced labor costs and increased labor productivity. Waltz notes that in 1952, “one man-hour of labor produced 51.4 pounds of dressed meat; by 1977, that had tripled to 154.6 pounds.”3As corporate profits soared, meatpacking workers’ wages were decimated. By the 1990s, the wages of packinghouse workers were 20 percent less than the average manufacturing wage.4Today, meatpacking workers are among the lowest paid and most exploited manufacturing workers.

It is against this backdrop that Waltz’s book begins. On October 1, 1992, the meat-processing giant Smithfield Foods opened the largest slaughterhouse in the world in Tar Heel, North Carolina. At the plant, workers handled roughly two thousand hogs per hour, or one hog every three seconds.5 Injuries due to repetitive motions, cuts, and other factors were common at the Tar Heel plant. Injured workers were often denied medical care and later fired by their managers.6 But the poor working conditions at the Smithfield plant led to blowback. By December 1993, workers had begun to revolt. Led by Keith Ludlum, a Smithfield employee and Gulf War vet, employees began their nearly fifteen-year campaign to unionize.7

Few expected a union to prevail. First, the Smithfield plant never had a stable workforce. Due to low wages and poor working conditions, the plant had an annual turnover rate exceeding 100 percent. This made it hard for union organizers to establish a permanent cohort of union supporters. For instance, by 1997, Smithfield retained less than 8 percent of its 1994 workforce.8 In addition, many employees were undocumented immigrants. Fearful of being deported, many of them sought to keep a low profile and were reluctant to support a union.9

Second, Smithfield’s employees were divided among racial lines. Of particular concern was the divide between black and Latino workers who made up most of the plant’s workforce. Smithfield exploited this divide to discourage solidarity. For instance, on August 10, 1994, plant manager Henry Morris “told about two hundred employees during a mandatory meeting in the cafeteria that if workers—then mainly African American—supported the union, he would bring in the Hispanics.”10 Like the United Packing House Workers before them, however, union organizers learned how to unite the white, black, and Latino workers at the Smithfield plant.11They made connections with civil rights and immigrant rights organizations, campaigning not just for labor demands, but for antioppression ones too. To achieve solidarity, racism had to be combatted.

The third and most daunting challenge was strong opposition from the Smithfield owners. Smithfield, like all capitalist firms, worked to crush workers’ efforts to unionize, breaking labor laws on several occasions. Management forced packinghouse workers to attend company-sponsored, antiunion presentations and to watch antiunion videos. One video “showed a bullet hole over a baby’s crib where union workers shot into the home of a scab, a non-union worker who crossed the picket line.”12 Leading up to the vote, a sign was posted over the entrance to the Tar Heel slaughterhouse that read, “No Dues, No Strikes, No Union-Caused Trouble, Vote No Union on August 25.”13

When the first National Labor Relations Board (NLRB) supervised vote was held on August 25, 1994, the Tar Heel workforce voted against forming a union by a vote of 1,910 to 1,107.14 But the vote was a sham. Thus began a long court battle against the Tar Heel company. Union supporters were victorious and Smithfield agreed to hold a second NLRB-monitored election. On December 11, 2008, the Smithfield workers voted to establish a union by 2,041 to 1,879.15

Hog Wild is packed with information to the point that it can overwhelm the reader at times. With its journalistic style, the book has no central thesis—meaning must be teased out of the pile of facts. However, I believe there are two essential messages that Waltz conveys: the importance of solidarity across race and gender lines, and the importance of rank-and-file activism.

A central idea of Marxist thought is that labor is disciplined by the existence of a reserve army of the unemployed. The larger this army, the more labor can be held in check. If there is no unemployment, workers can demand higher wages. If there is no unemployment—that is, no one willing to fill workers’ places—a company, at least in the short term, must accept workers’ demands. In contrast, if there is a long line of unemployed workers waiting outside the company’s gates, the company can discipline its workers. If the workers demand a higher wage or go on strike, the company can replace these workers with scabs—strikebreakers who are willing to work for less. As Marx states:

Taking them as a whole, the general movements of wages are exclusively regulated by the expansion and contraction of the industrial reserve army, and these again correspond to the periodic changes of the industrial cycle. They are, therefore, not determined by the variations of the absolute number of the working population, but by the varying proportions in which the working-class is divided into active and reserve army, by the increase or diminution in the relative amount of the surplus population, by the extent to which it is now absorbed, now set free.16

When one reads passages such as this, it is easy to understand why underpaid or unemployed workers blame immigrants or other exploited minorities for their unemployment. Unions have a history of supporting restrictions on immigration because of fears that immigrants would take their jobs. This is the traditional way in which many mainstream unions have addressed this question.

But as Waltz demonstrates in Hog Wild, such a strategy will lead to failure. It not only reproduces racism and other forms of oppression, alienating minority groups, but it also fractures progressive movements and prevents all workers from coming together—and they are strongest together. The workers at the Tar Heel plant succeeded because they were able to break down racial divides. During their successful unionization campaign, Tar Heel union organizers teamed up with the United Food and Commercial Workers International Union, the National Association for the Advancement of Colored People, immigrant rights groups, and other social justice organizations. Together, these organizations fought not only economic injustice, but racial injustice as well—and you cannot have one without the other.17

Meatpacking workers have a history of fighting for both economic and racial justice. The unionization struggle at the Tar Heel plant parallels the work done by the United Packing House Workers of America (UPWA) during its thirty-year existence. From its inception in 1937 until its merger with the Amalgamated Meat Cutters in 1968, the UPWA “struggled to organize and fairly represent workers in meat packing plants and collateral industries, fought to overcome racism within the union, and played a major role in building and supporting a burgeoning civil rights movement during the 1950s.”18

The work of the UPWA is chronicled in books such as Down on the Killing Floor: Black and White Workers in Chicago’s Packinghouses 1904–54 by Rick Halpern and “Negro and White, Unite and Fight!”: A Social History of Industrial Unionism in Meatpacking, 1930–90 by Roger Horowitz.19 As these books demonstrate, the unionization effort at the Tar Heel plant was not a historical anomaly, but part of a larger history of working-class activism among meatpacking workers. Only time separates the UPWA and the Tar Heel workers. The UPWA “laid a historical foundation for worker unity at the Smithfield Packing in Tar Heel.”20

The experiences of the UPWA and the Tar Heel movement provide critical lessons for unions today. First, there are no boundaries between economic and social issues. The American Federation of Labor-Congress of Industrial Organizations and their many affiliated unions will not succeed unless they connect their struggle for economic justice with justice against oppression. Unions can succeed only if they are able to establish solidary across racial, as well as gender, sexual, and other lines.

The second important insight of Hog Wild is the importance of working-class militancy. The workers at the Tar Heel plant were not passive victims. They were active and fought for their rights. The struggle for workers’ rights is not won by union bosses in smoke-filled rooms. Rather, it is won by the rank and file, those who endure the brunt of the capitalist system. And it is only through direct action that such progressive changes can be won.

While Waltz mentions the drastic rise in income inequality and the decline in unionization, which has led to a decline in pay and a deterioration of working conditions for slaughterhouse workers, she fails to note that such problems are due to the inherent nature of capitalism.

According to Marxist thought, exploitation occurs not because businesses want to exploit workers, but rather because of the profit motive. The goal of capitalists is to extract as much profit as possible from workers while minimizing costs. If slaughterhouse operations are driven by the profit motive, human need and animal welfare will remain secondary. Even if strong unions are established, capitalists will use their position of strength to slowly erode any union victories. And this will remain true until workers have control over the means of production.

Despite this weakness, Hog Wild is a great book that should be read by anyone interested in advancing the cause of economic and social justice. What sets the book apart is its hopeful message. The book is not about the horrors that go on inside the slaughterhouse; it is about the political action that developed because of these injustices. It does not dwell on the gruesome nature of the slaughterhouse industry or the brutality inflicted on both workers and animals. There are plenty of books on this topic.21

Hog Wild is a book refreshingly built on optimism instead of cynicism. In the Trump era, such optimism is needed now more than ever. While Hog Wild shows the ugly side of the slaughterhouse industry—the poor working conditions and low pay—it also showcases the efforts of ordinary workers to overcome such injustices. And if a union can be formed at the world’s largest slaughterhouse in a state with the lowest level of union membership in the richest country in the world, then there is little that the working class cannot accomplish.