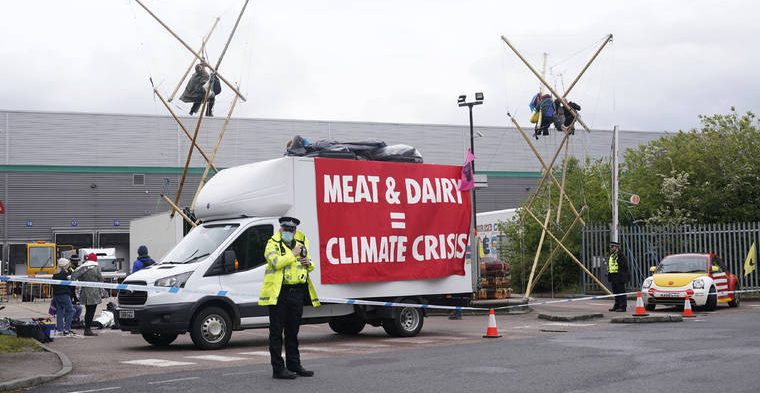 Above photo: Yui Mok/PA via AP.

Environmental activits are blockading four McDonald’s distribution centres in a bid to stop deliveries to the fast food giant’s restaurants across the country this weekend.

They have poured fake animal blood over signage with some protesters dressed as the chain’s mascot, Ronald McDonald.

Demonstrators say they are targeting the chain because of its “role in the climate emergency” and are demanding McDonald’s – which has 1,300 restaurants across the UK – commits to being fully plant-based by 2025.

Animal Rebellion spokesperson, James Ozden, who is taking part in the Coventry protest, said: “The meat and dairy industry is destroying our planet: causing huge amounts of rainforest deforestation, emitting immense quantities of greenhouse gases and killing billions of animals each year.

“The only sustainable and realistic way to feed ten billion people is with a plant-based food system.”

Nick More, renewable energy developer and member of Amazon Rebellion, accused the chain of trying to “greenwash” its reputation in recent years but said: “There is no transparency in their supply chain or independent audit sufficient to support their claims that they are not a driver of deforestation.”

The group tweeted that it intends to remain at the sites for at least 24 hours and aims to cause “significant disruption” to McDonald’s as its outlets restock over the weekend.

A second tweet called on McDonald’s to personally engage with the activists at the protest sites, saying: “We’re waiting for them to come talk to us, or we’ll stop their distribution to all 1,300 restaurants all day.”

Animal Rebellion describes itself as “a mass movement that uses nonviolent civil disobedience to bring about a transition to a just and sustainable plant-based food system”.