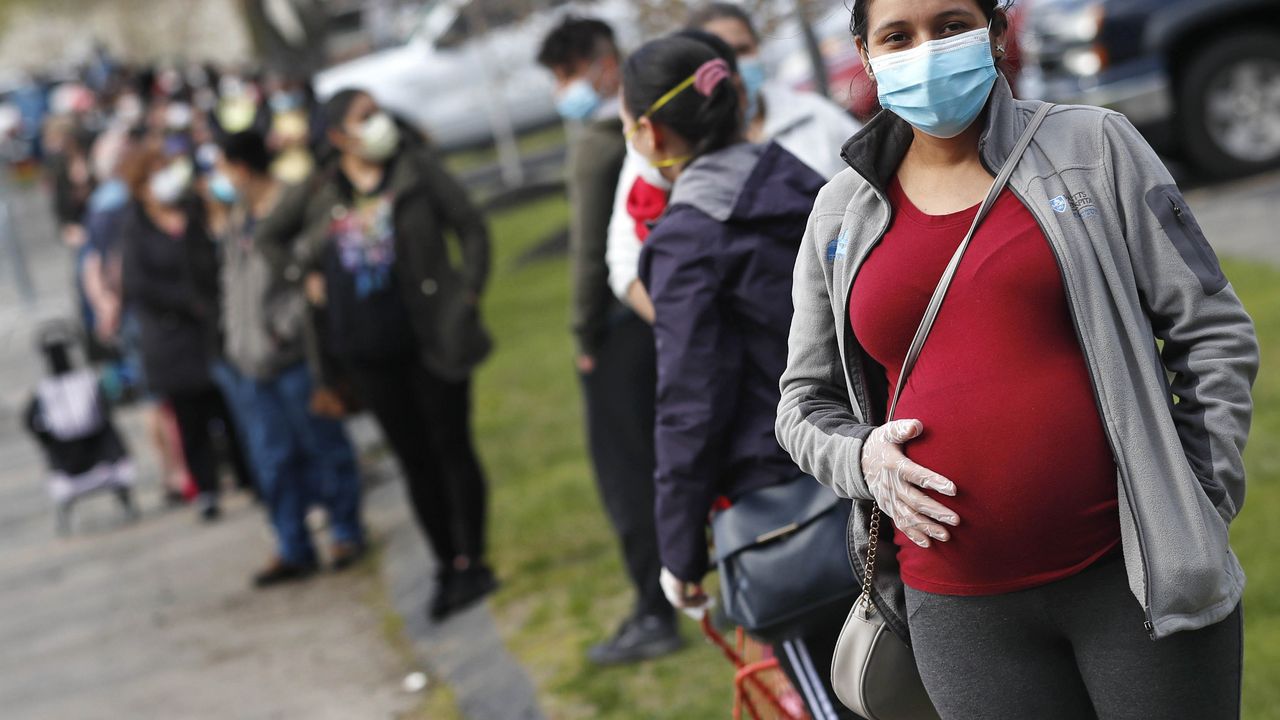 Above photo: A pregnant woman waits in line for groceries with hundreds during a food pantry, sponsored by Healthy Waltham for those in need due to the COVID-19 virus outbreak, at St. Mary’s Church in Waltham, Mass. AP Photo/Charles Krupa.

According to newly released Bureau of Labor Statistics (BLS) figures, 47.2 percent of working-age Americans were without work in May, the highest level recorded since the end of World War II.

The numbers are based on the BLS employment-population ratio, which states the proportion of the total labor force who are actually working. It is a more accurate measure of joblessness than the monthly unemployment report, which counts only those actively seeking work.

Citing Torsten Slok, the chief economist at Deutsche Bank, CNBC said it would take the creation of an additional 30 million jobs to bring the employment-population ratio back to January levels.

The report comes ahead of the release of the official jobless statistics for June later this week. They are expected to reflect a marginal decline in the official unemployment rate from 13.3 percent in May to 12.4 percent in June. It is not known if the June figures will correct the previous undercount in the numbers of May and April, when millions of workers were incorrectly classified. This resulted in the official jobless percentages being about 3 percent lower in May and 5 percent lower in June.

Joblessness was the highest in the leisure and hospitality sector, 35.9 percent. Retail was at 15.1 percent, construction at 12.7 percent and manufacturing at 11.6 percent. Among young people age 16–19, 29.9 percent were unemployed and 23.2 percent of workers age 20–24 had no work.

Despite the reckless early reopening of state economies during the course of June, there were around 1.5 million new claims each week for unemployment benefits. Many workers do not have a job to come back to. This is particularly the case for those employed at small businesses, such as restaurants, which could not survive the shutdown. A further wave of larger bankruptcies is also expected.

The full impact of this economic collapse will hit toward the end of July when the temporary weekly increase of $600 in unemployment benefits enacted in the CARES bill ends. The cutoff, scheduled for the week ending July 25, will slash income by about two-thirds for 20 million workers and will lead to a surge in hunger and evictions.

Personal income dropped 4.2 percent in May, despite the supplemental payments. The cutoff will be particularly devastating for low-wage workers, since regular unemployment benefits cover half or less of weekly pay.

The moratorium on evictions from federally subsidized housing contained in the CARES Act is also set to expire at the end of July, meaning that millions of families could soon confront the possibility of being in the street. According to the latest US Census Bureau Household Pulse Survey, 30 percent of renters had little or no confidence that they could meet housing payments for the next month.

A patchwork of state and local temporary bans on evictions are expiring or are being challenged by landlord associations. A statewide eviction ban was set to expire in Florida on July 1, barring a last-second extension by the governor. A statewide ban in Virginia expired June 29. In San Francisco, a citywide ban is being challenged in court. Earlier this month, an eviction ban expired in New York City, leading to warnings that 50,000–60,000 eviction cases could soon be filed in housing courts.

Andy Winkler of the Bipartisan Policy Center issued a warning reported in Politico of a “tsunami” of evictions following the expiration of the $600 unemployment supplement.

It is clear that corporations are using the crisis caused by the pandemic to carry out a major restructuring, including the permanent elimination of huge numbers of jobs. According to the International Monetary Fund, the world economy will contract by five percent in 2020, with US GDP down by eight percent. The GDPs of Mexico and Europe are expected to decline 10 percent, while China will show no growth. The second quarter in the US is expected to show the largest quarterly contraction since the end of WWII.

In an indication of what is to come, Airbus announced 15,000 job cuts worldwide by 2021 as it restructures its operations, an 11 percent reduction. Ten thousand job losses will be in Germany and France alone.

In recent years, spokesmen for the ruling class have been bitterly complaining that record low unemployment had created “tight labor markets” and demands for rising wages. The destruction of tens of millions of jobs will now be used by corporations as a hammer to demand a new wave of wage and benefit cuts from workers. This has already been seen in the airlines and among public-sector workers.

Amidst this devastation, the US stock market closed June with one of the best quarterly rises in history. The Dow Jones Industrial Average rose 216 points Tuesday. For the second quarter, the Dow Jones rose 16 percent, erasing most of the losses of the first quarter of 2020. Apple, Home Depot, Dow and Microsoft were among those making the strongest gains. The S&P 500 showed a 19.1 percent gain for the quarter, while the Nasdaq is up 11 percent for the year.

The rise in the markets comes as COVID-19 cases surge in the United States, with record numbers of new infections, following the lifting of all attempts by federal and state governments to control the virus. The stock rise has been fueled not by an improving real economy, but the unlimited infusion of cash by the US Federal Reserve. Like a heroin addict, the markets rely on ever-greater injections of liquidity to maintain their inflated levels. Meanwhile, the attacks on workers’ jobs and living standards become ever more ferocious as the corporate oligarchy attempts to claw back the money from the hides of workers.

Workers should not accept that they shoulder the economic burden for the criminal and inept response of the capitalist authorities to the coronavirus pandemic. The massive resources going to the financial markets must be redirected to meeting pressing human needs. Workers made jobless by the spread of the virus and necessary health measures must have their incomes and livelihoods protected. This requires the independent political mobilization of the working class on the basis of a socialist and internationalist program.