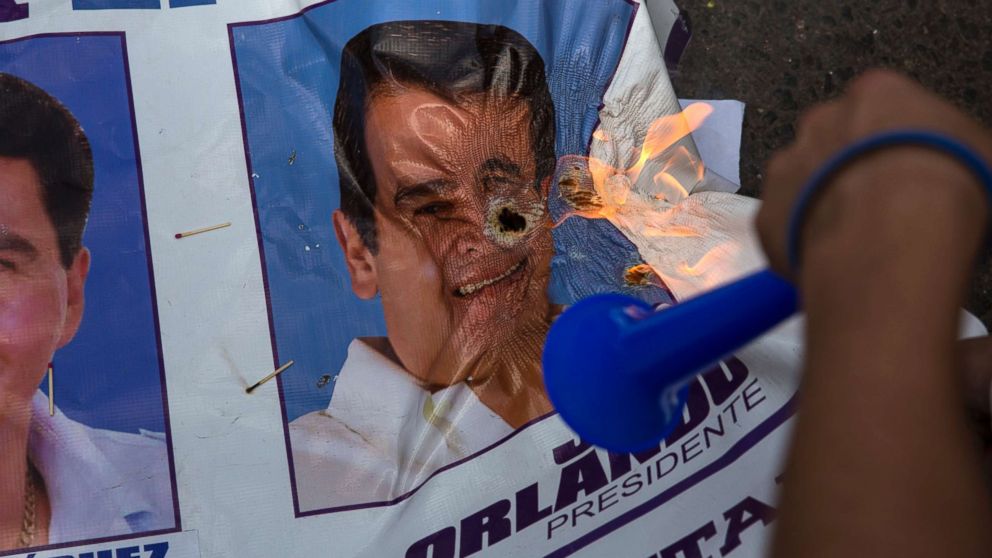 United States Struggles To Pick A Side In Upcoming Honduran Elections

For Biden, backing a candidate for the November elections in Honduras is a choice between protecting U.S. business interests and condemning the corruption, drug trafficking, and violence that increase migration.

Of the countries in Central America’s “northern triangle,” Honduras is the one that sends the most migrants to the United States. Already this year over 32,000 Honduran migrants have been deported from the United States, including more than 2,600 children. The country’s president, Juan Orlando Hernández (JOH), was supported by President Trump because he is a strongman willing to forcibly stop Honduran migrants from leaving the country. He even signed a misnamed “safe country” agreement implying that Honduras was a haven for asylum seekers. In return, Trump was willing to acquiesce in JOH’s disastrous domestic policies even though they are one of the main drivers for migrants to leave.

Now, with Honduran elections on November 28, the Biden administration must weigh contradicting factors in deciding how to handle Trump’s erstwhile ally. On the one hand, Honduras is strategically reliable and important to U.S. business interests; on the other, problems of state-condoned violence, corruption, and impunity are fostering both continued migration and the drug trade.

Honduras’s neoliberal economy and lax regulation allow the exploitation of the country’s natural resources at any cost to local communities. Honduras has low taxes, public services decimated by underfunding and corruption, and one of the continent’s biggest gaps between rich and poor. Although largely unmentioned in official discourse, such policies align with U.S. business interests and are not seen as a problem for U.S. foreign policy. Instead, it is the mixed economy and social programs of neighboring Nicaragua that are regarded as “an extraordinary and unusual threat” to U.S. security.

Once seen as a “banana republic,” Honduras has long failed to meet the needs of most of its population. Recent blame for its failed governments extends back to Biden’s vice-presidency when, in 2009, Washington turned a blind eye to the military coup that deposed the left-of-center President Manuel Zelaya who had started to make economic and social reforms. After a short interregnum in which Zelaya attempted to return to power, Washington gave its approval for new elections. The National Party’s Porfirio “Pepe” Lobo was the winner, prompting a series of increasingly corrupt governments. Both Lobo and the former first lady, Rosa Elena Bonilla Avila, grossly abused their positions and were later sanctioned by the U.S. State Department. Lobo has so far escaped any charges, but his wife faces prison for defrauding a children’s charity of $505,000. A flawed election in 2013 brought JOH, now Lobo’s rival, to the presidency, and corruption intensified. In defiance of the Honduran constitution, JOH ran for and won a second term of office in 2017 in an election that was even more blatantly fraudulent than 2013. Twenty-four people were killed by police in the protests that followed.

Since the 2009 coup, state-sponsored violence has intensified. Opposition movements, community activists, and government critics have been suppressed by police forces militarized by U.S. funding and training. The United States argues that these forces are necessary to tackle the country’s endemic gang violence. In reality, they appear to have fostered it, leaving many migrants literally running for their lives. Human rights abuses received international attention with the murder of Berta Cáceres in 2016. But this was only one in a series of assassinations and disappearances of activists trying to defend communities from mining, energy, and tourism projects, many promoted by companies from the United States and Canada. Assassinations continue: on July 25, an opposition politician and lawyer, Carolina Echeverría, opened the door of her home to what she thought was a group of medical personnel dressed in protective gear who were coming to check on her husband, ill with Covid-19. They turned out to be assassins who shot her in the side of the head in front of her sick partner. So far in 2021, the Honduran homicide rate is 13 per cent higher than in 2020.

But no issue illustrates Biden’s dilemma more clearly than two recent U.S. prosecutions for drug-running that have implicated officials of JOH’s government and earned it the label “narcostate.” The first was the conviction in New York of JOH’s brother Tony, who faces at least 30 years in prison for bringing 200,000 kilos of cocaine into the United States. The prosecution concluded that drug traffickers “infiltrated” and “controlled” the Honduran government. The country’s ports and frontier posts are said to be a paradise for organized crime because weak systems for inspecting goods allow drugs to be exported and equipment for processing them to be imported.

The defendant in the second case, Geovanny Fuentes, claimed that his drug labs were protected by the military on the orders of the president himself, quoting JOH as saying that he would “shove the drugs right up the noses of the gringos” by flooding the United States with cocaine. While JOH was quick to deny the allegations and to remind Biden of their past friendship, the new U.S. administration has been obliged to distance itself, saying “we are committed to partnering …with those in the Honduran government that are committed to working with us to root out the corruption that has become really endemic to that country.” However, when a list of corrupt officials subject to U.S. sanctions was published in July, it included 21 Honduran politicians—most of them from the ruling National party—but excluded JOH and those closest to him.

Recent natural disasters have further highlighted the ways in which the narcostate fails the majority of Hondurans. In November 2020, two hurricanes hit a country totally unprepared for them, destroying 6,000 homes and seriously damaging 85,000 more. Six months later, the international organization Médecins Sans Frontières said the government’s response had been “inadequate,” leaving more than 55,000 people still living in temporary shelters. Poverty in Honduras increased to 70 percent in 2020, up 10.7 percentage points from 59.3 percent in 2019, driven by tropical storm damage and by the pandemic. It is hardly surprising that yet another migrant “caravan,” largely of Hondurans, was crossing Mexico at the end of August.

The massive disruption caused by the hurricanes also provoked a fresh peak of Covid-19 infections. It continues unabated: August was reportedly the worst month this year for Covid-related deaths. Although the country has received over 4.5 million vaccine doses, mainly as donations, just 13 percent of Hondurans have been fully vaccinated. At the start of 2021, mayors of cities close to El Salvador requested and received vaccines from their Salvadoran counterparts, and Hondurans living near the Nicaraguan border were crossing it to get vaccinated. Weakened by corruption and underfunding, the health service has been overwhelmed. In April, a senior doctor reported “the collapse of the hospital network.” Seven mobile hospitals were ordered to help fill the gaps last year, but five of these are still not operational. The head of the agency that made the $47 million deal was accused of corruption and subsequently sacked. Protesters at one mobile hospital carried a banner proclaiming: “If it were a narco lab, it would be working.”

Corruption is rampant. The National Party’s presidential candidate in the coming election, Nasry Asfura (“Tito”), has been accused of massive misappropriation of funds in his current role as mayor of Tegucigalpa. Honduras’s Supreme Court is protecting him from prosecution so he can continue his campaign. For different reasons, the rival candidates leave Washington with no good options. The Liberal Party represents the traditional opposition, but a number of its members were included in the State Department’s recent list of corrupt politicians, and only four years ago its candidate Yani Rosenthal was imprisoned in the United States for money laundering. If Biden cannot easily back Rosenthal, he is also unlikely for political reasons to back the opposition candidate performing best in the opinion polls, Xiomara Castro. She is the wife of the deposed Manuel Zelaya and the nominee from the left-of-center LIBRE party. Furthermore, having tried and failed to form alliances with some of the remaining eleven minor parties, Castro looks unlikely to win even in Honduras’s desperate circumstances.

JOH’s plan seems to involve holding another badly run election where the National Party prevails through renewed electoral fraud or by buying votes, as happened in 2017. The National Election Council is being deprived of the funds it needs to operate effectively and some 1.7 million voters may not receive the identity cards they need to take part. If Asfura wins, he is widely believed to be ready to protect JOH from prosecution and from the much worse prospect of being extradited to the United States. While strongly criticizing Nicaragua’s electoral process, which also culminates in November, Washington has failed to call out Honduras’s failures. When JOH put forward a purely cosmetic revision of the electoral law, Washington urged the Honduran Congress to back it. The Organization of American States even called it a “significant step forward.” If the Biden administration accepts another highly questionable election result in November, this will signal a willingness to tolerate rampant corruption, deepening poverty, and growing violence, even if this means more Hondurans arriving at its southwest border.