Uniting To Protect Venezuela And Stop The US War Machine

Above: No War, No Sanctions, No Coup, Hands of Venezuela rally in Los Angeles from Liberation News.

Update: The US-led coup attempt in Venezuela continues to falter as the US admits the opposition is selfish and divided. Juan Guaido was exposed as relying on Tarot Cards and an astrologer to determine Venezuela’s future. Russia and China pledged unified support to Venezuela in opposition to the US-led coup. The US added new sanctions against Venezuela.

The effort to protect international law by the Embassy Protection Collective continues in court and needs your help to defend against US government prosecutions. And, a coalition of organizations announces a weekend of actions during the United Nations General Assembly meeting in New York City from September 20 to 23: The People’s Mobilization to Stop the US War Machine (and Save the Planet). More details below. 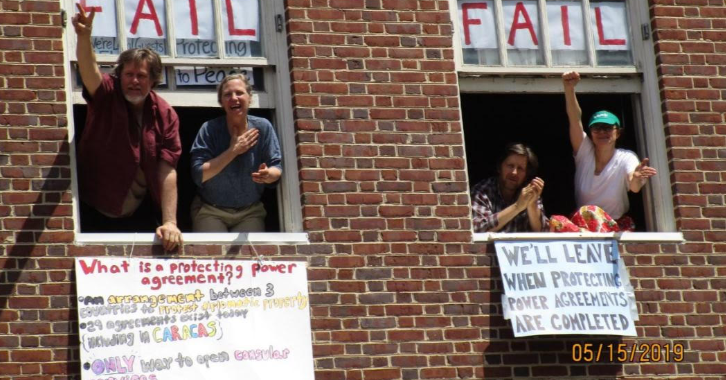 Support the Embassy Protection Collective’s efforts to challenge US intervention in Venezuela.

Embassy Protection Collective (EPC) members stayed in the Venezuelan Embassy in Washington, DC for 37 days to protect the Vienna Convention and prevent an escalation of conflict with Venezuela. During that time, EPC members inside the embassy were cut off from receiving food, electricity and water. EPC members who tried to deliver food were physically assaulted. All EPC members were subjected to loud noises, strobe lights, harassment, threats and intimidation. On May 16, federal agents raided the embassy and arrested the four remaining EPC members inside.

Your donation will help to cover the legal costs for EPC members who are facing federal charges punishable by up to one year in prison plus a $100,000 fine. They face a state that has unlimited resources and is intent on making an example of EPC members. Support the effort to mount a defense of EPC members and by extension the right to take action to protect the sovereignty of the Venezuelan people and their Bolivarian process.

With your support, the EPC will put forward a strong defense of its actions. A victory in this case will be a victory for the anti-imperialist movement.

The fund will also cover costs for one EPC member who was severely injured by the pro-coup mob while trying to deliver food.

Be an Embassy Protector by donating today. Stop US intervention. Solidarity with the people of Venezuela.

This week, a leaked tape recording of Secretary of State Mike Pompeo speaking to a group of Jewish donors in New York revealed that all is not well in the US-led coup against Venezuela’s elected government. Pompeo admitted that opposition members are all out for themselves, divided and acting selfishly. The facade of unity is only for public consumption; in reality, the US has been unable to unite the opposition. Of course, anyone who has followed Venezuela would know the opposition has always been divided against itself and this is one of many reasons they cannot win elections. Pompeo’s speech showed once again that the Trump administration does not understand Venezuela and underestimates the Venezuelan people, their military and President Maduro.

The New Yorker, in a propaganda-filled article about Venezuela, revealed that Juan Guaido travels with an astrologer who uses Tarot cards to predict his future. He also revealed that Trump and Pence were smitten with the wife of the leader of Guaido’s party, Leopoldo Lopez, who was an initial source for (mis)information on Venezuela. Now, the author reports, Trump is feeling misled by John Bolton.

Trump’s latest inaccurate understanding of Venezuela is that the Russians have left the country. The Kremlin corrected the record to make clear it still has military technicians in Venezuela working on air defense systems. Further, China and Russia said they are working together to bring stability to Venezuela in the face of the US-led coup and promised to “defend the interests” of Venezuela. Beijing and Moscow are opposed to any “foreign intervention in the internal affairs” of Venezuelans.

Read this interview with two Embassy Protectors Julie Leak and Martha Allen. And, Eleanor Goldfield explains why we are also the victims of the US-led coup attempts and why that heightens the urgency of cross-border solidarity. 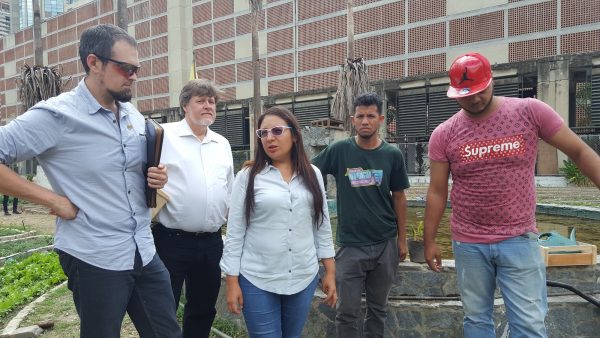 More Coercive Measures and Venezuela Recognized for Work on Housing

At the end of May, the Trump administration announced new unilateral economic coercive measures against Venezuela, this time sanctioning people involved in the food distribution program called CLAP. The program delivers basic foods and supplies to over 7 million families every month for about $0.40 each. It has helped to sustain people who are struggling because of hyperinflation, which makes basic goods unaffordable. But, the Venezuelan people remain undeterred. They will now use the civilian militia, composed of almost 2.2 million women and men, to distribute food and goods to those who are most vulnerable.

The CLAP program is one example of the ways the Venezuelan government works to meet the basic needs of its people. Another is the Great Housing Project Venezuela (GMVV). The UN recognized Venezuela as a top country for its work to provide housing as a human right. Since 2011, Venezuela has built over 2.6 million social housing units. We visited one when we were in Caracas in March and spoke with the head of the Ministry of Urban Agriculture, Mayerlin Arias, and residents who were growing organic food in a courtyard by the buildings (see the photo above).

Protesters gathered April 21, 2018, in Portland, OR behind a “Stop the U.S. War Machine,” banner. Photo from Workers World.

Here are actions you can take to support the sovereignty of Venezuela and stop the US War Machine, which continues raging against multiple countries.

1. Send a letter to the US State Department calling on it to sign a mutual protecting power agreement with Venezuela to protect the US and Venezuelan embassies in each other’s country. Click here to send the letter.

2. Join or organize a “Hands Off Venezuela” action the weekend of July 13 to 15. Actions are still forming.

3. Mark your calendar now for the People’s Mobilization to Stop the US War Machine (and Save the Planet) in New York City September 20 to 23 during the United Nations General Assembly Meetings. Click here to sign on and get more information. Here is the tentative calendar:

At a time when all of the world leaders gather, we will say we’ve had enough of the US War Machine.

We demand the US be held accountable for its destructive acts. It’s time for the US government to obey the United Nations Charter by stopping regime change operations, ending the use of unilateral coercive measures (aka sanctions) and ceasing military attacks.

We demand the US sign the nuclear weapons ban treaty, rejoin the Iran nuclear agreement, disband NATO and close bases and outposts around the world.

We demand an immediate transition to a peace economy that uses our resources to meet human needs and protect the planet.

4. Join the Rage Against the War Machine at the White House on October 11. This action is being organized by The Women’s March on the Pentagon.